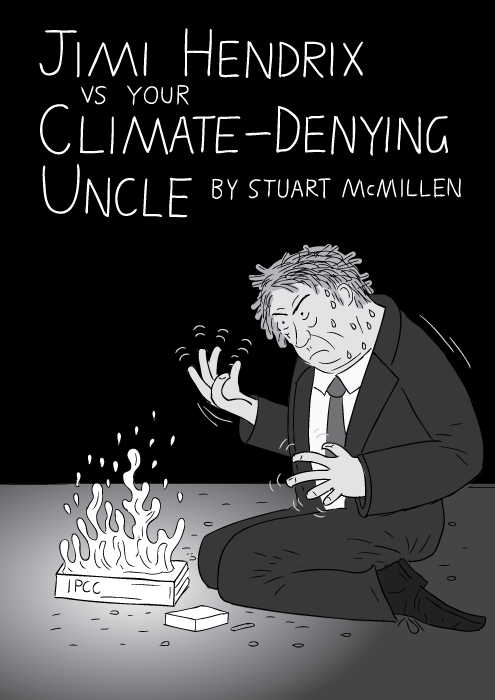 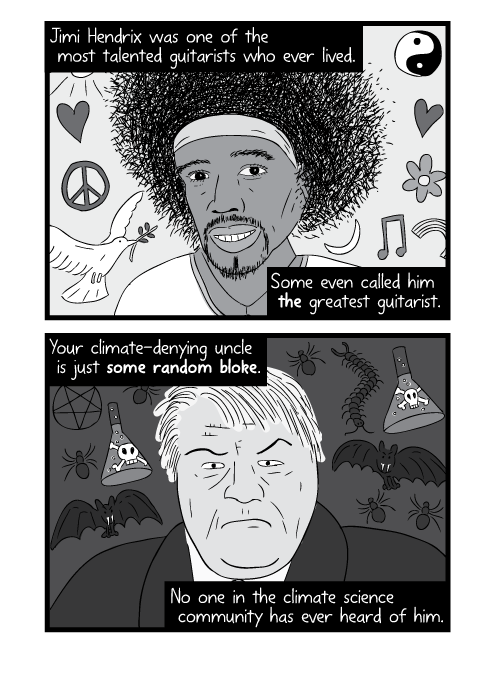 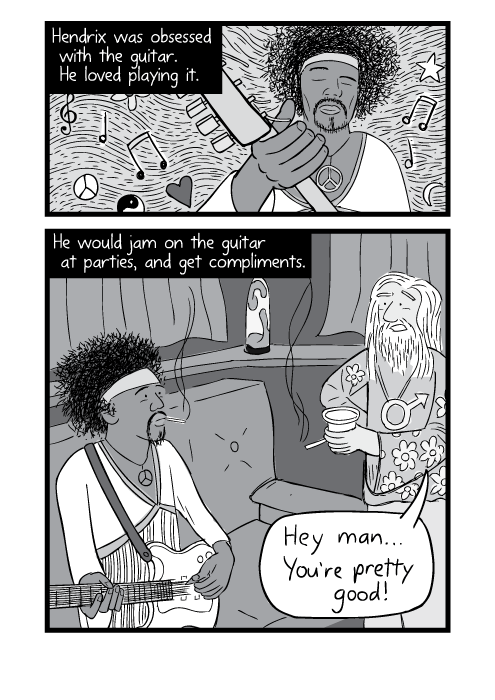 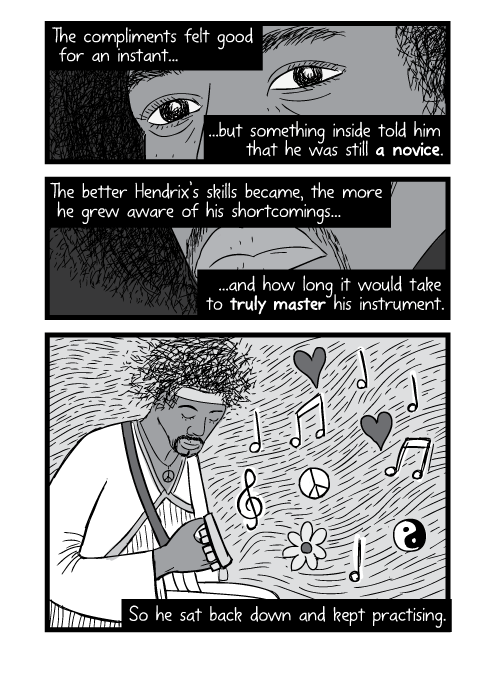 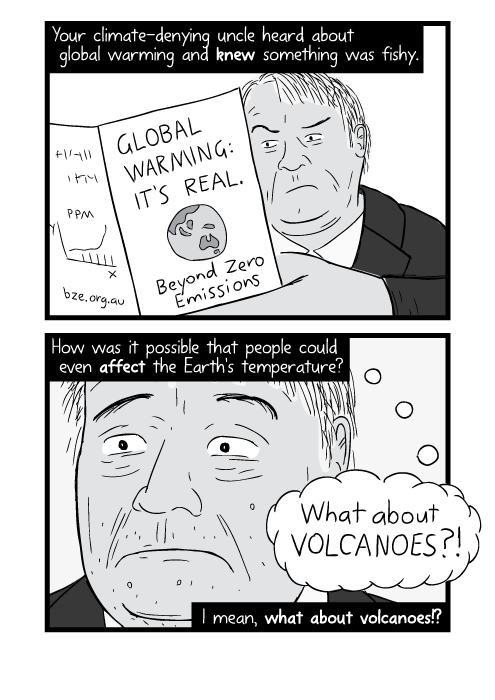 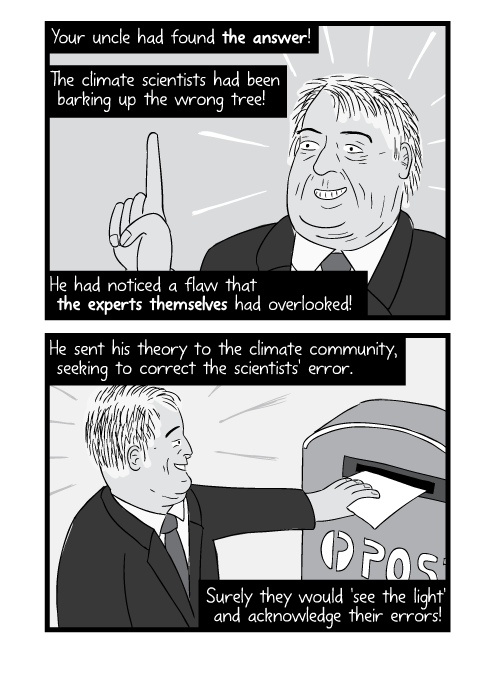 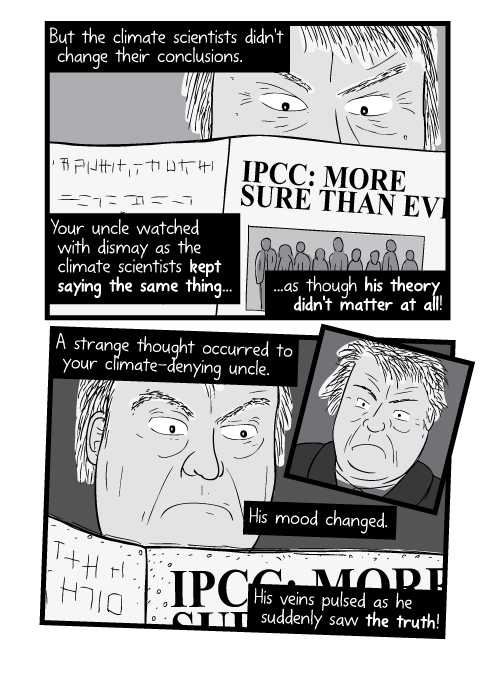 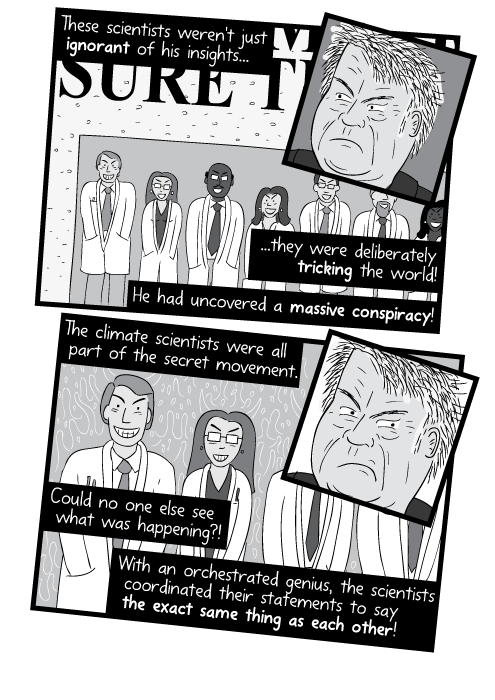 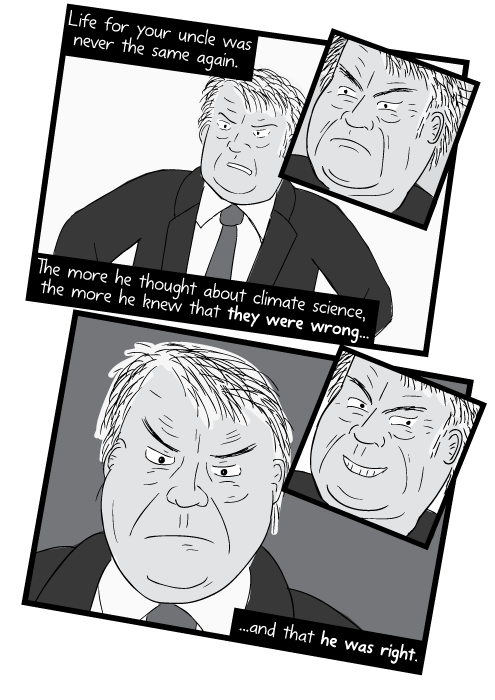 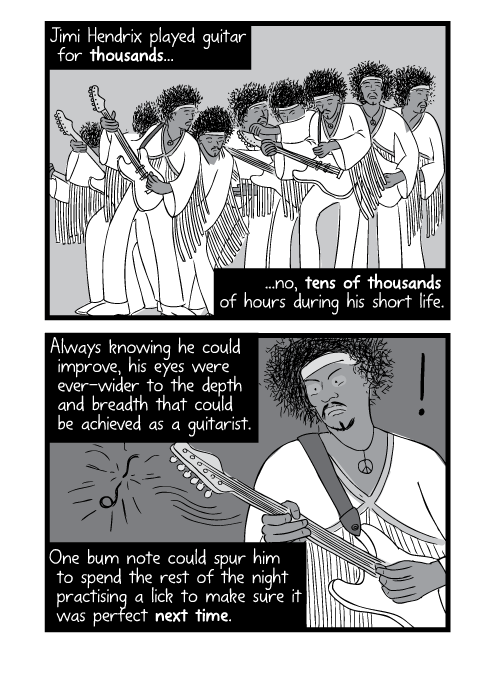 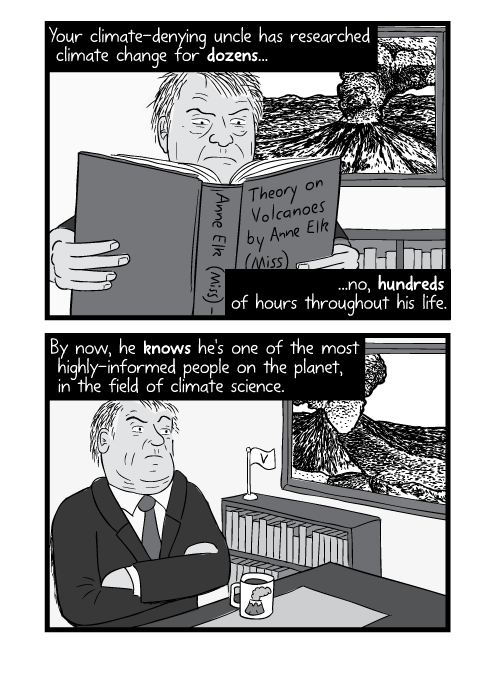 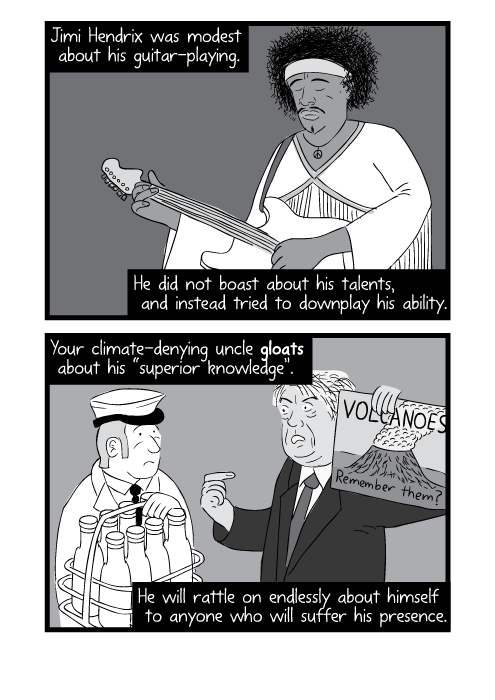 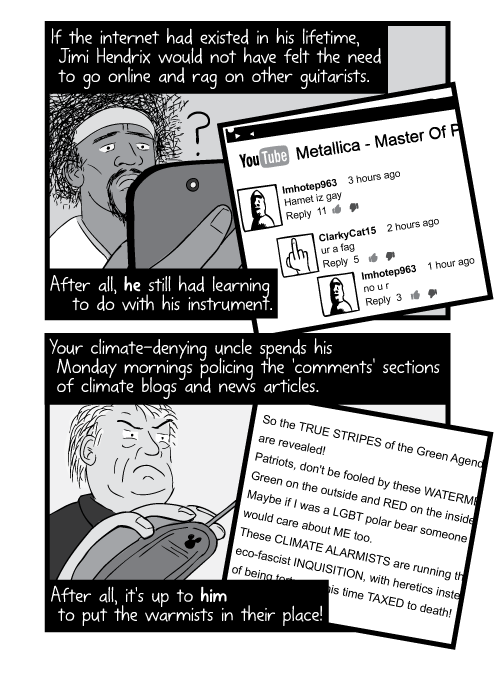 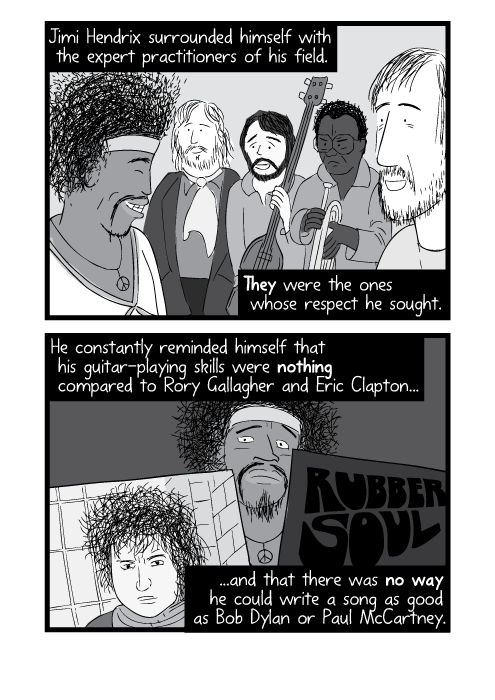 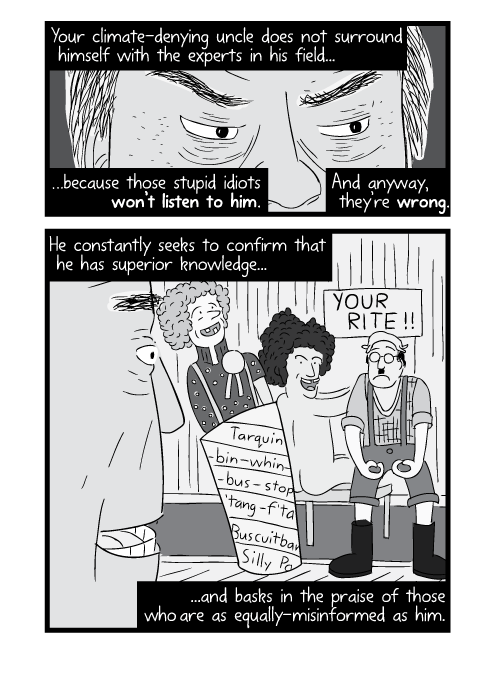 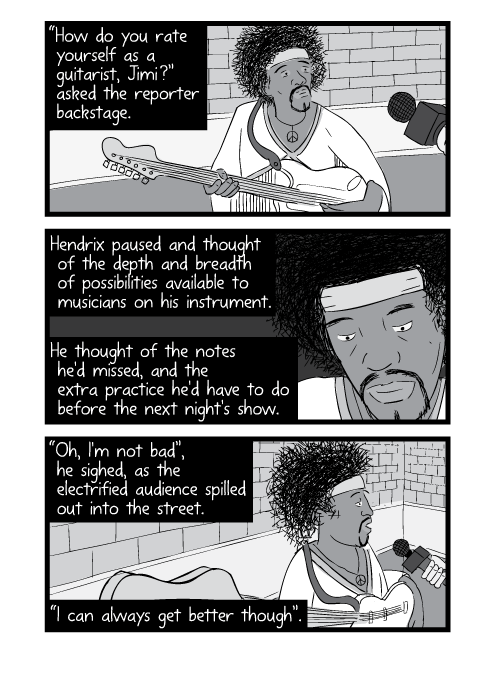 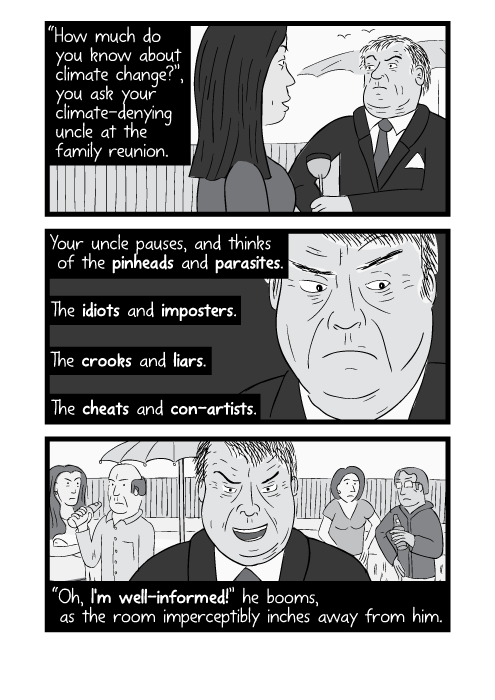 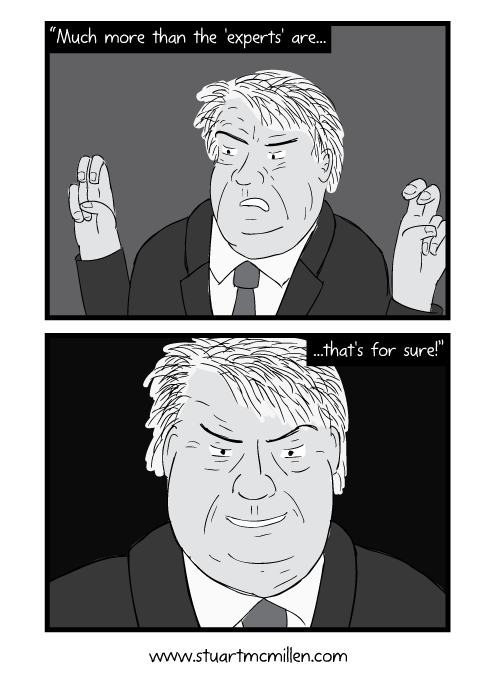 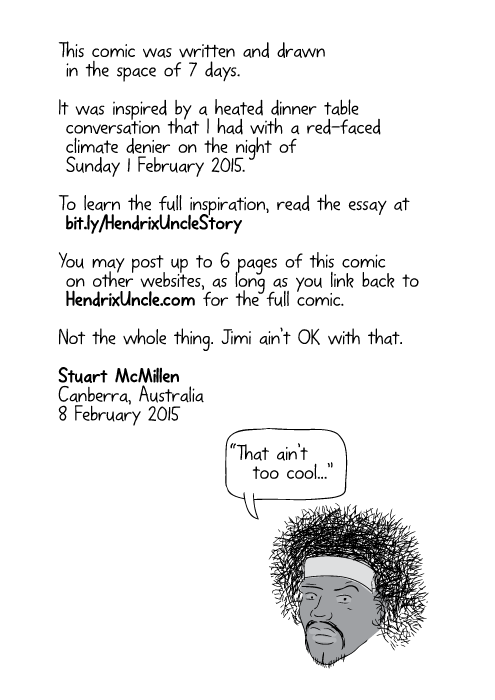 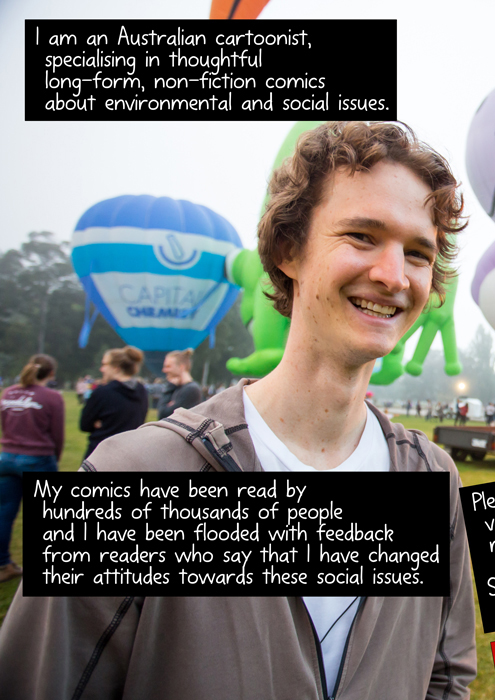 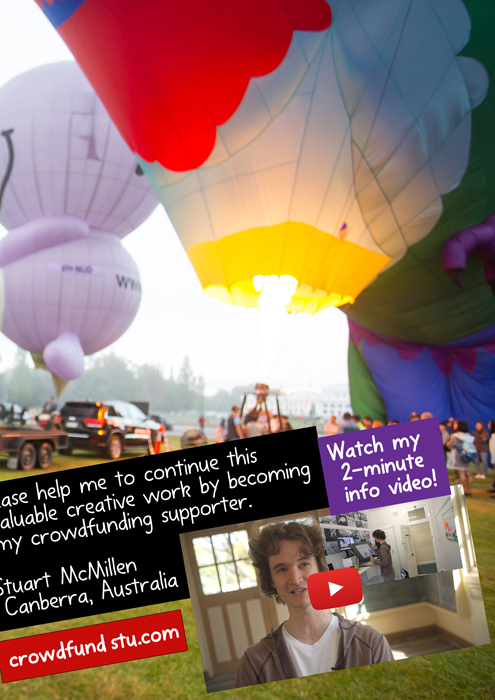 Please read my reflective essay Dinner with a climate denier: the making of my Hendrix Uncle comic. This blog post describes the actual conversation that I had with a red-faced climate denier. I was so enraged by his arrogance that I decided to draw this comic! 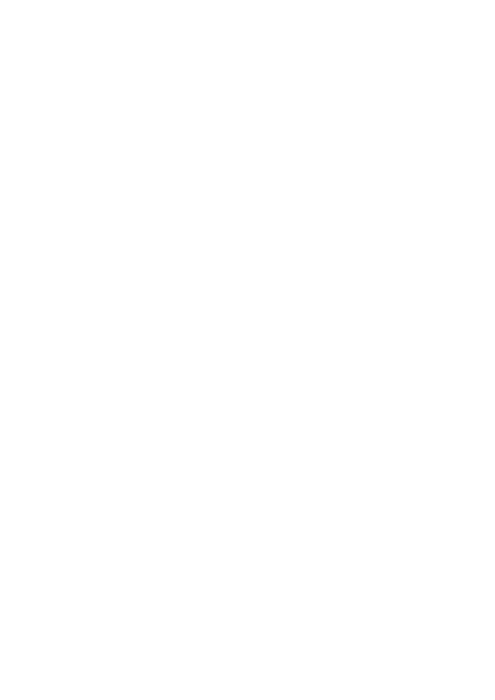 I think it is funny that people are now called "climate change deniers" who take issue with the fact that anthropomorphic climate change will likely be a short term blip in geologic time, as your "peak oil" comic shows. No matter what we do unilaterally to reduce CO2 emissions from fossil fuels, all of the cheaply available fuels will be used (by China, India, the rest of Asia and then Africa) until new technology that is less expensive (Fusion?) is developed. Since our atmosphere was full of methane before those pesky plants polluted it with Oxygen, climate change has been going on for billions of years. Its like a wise man told me: " I can predict with absolute certainty that the stock market will continue to change" Only an idiot would deny Climate is changing. I think the question is what can we do about it?

Great stuff, Stuart. Love the inspiration and execution. The essay is a really nice touch too. I'll make my contribution to super saturation by spreading it as far and wide as I can.

My favorite part is that the uncle looks like the Grinch.

I don't know how you endured a dinner conversation with a climate change denier without skipping right to the part where you laugh in his face. A great comic came from it though!

Love it, another great installation! I've been thinking a lot about volcanos lately... longing for the days when they were the greatest threat...Have you shown your uncle this yet?https://www.youtube.com/watch?v=r1ywB8132jc

Loved this!! SO True, this Dunning-Kruger effect. Very true that the more you know, the more you realise there is to know, and the less you think you know (proportionally speaking). The thing is though, while it is admirable that we hold our beliefs on CC at arms length, it is probably pretty unlikely that there is any evidence out there which is going to overturn the groaning weight of existing evidence, from many and varied fields of science, that supports the existence of human induced global warming. It's really very unlikely, but as a good scientist, yes I agree we must always entertain the possibility of it's existence, however theoretical that evidence is. Well done Stuart for tackling such an important topic - I hope certain radio personalities read this and experience the shock of recognition ;-)