crowdfundstu.com
Dinner with a climate denier: the making of my Hendrix Uncle comic

This is a ‘making-of’ essay describing the inspiration behind my comic Jimi Hendrix vs your climate-denying uncle.

This comic was inspired by my heated discussion with a red-faced climate denier on the night of Sunday 1 February 2015. We were both dinner guests at the house of a common friend.

“Volcanoes!” was his major flaw with global warming “Volcanoes emit much more carbon dioxide than all of humanity. We have a minuscule effect on the atmosphere. If they wanted to stop CO2, they should tax volcanoes!” 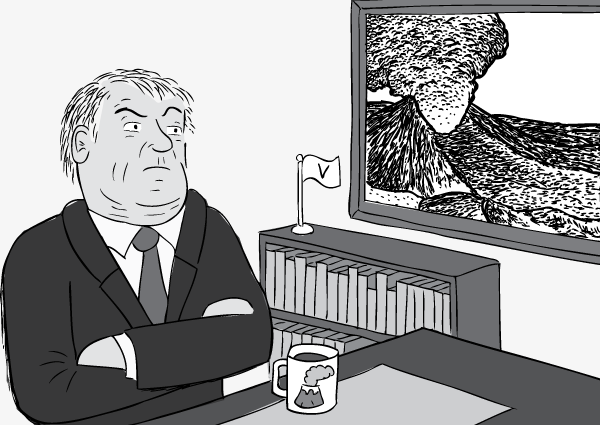 I immediately, and calmly informed him about a 2011 paper which investigated the scale of human CO2 emissions, relative to the impact of volcanoes.

The paper, written by U.S.G.S. scientist Terry Gerlach, found that Earth’s volcanoes, on average, emit the same amount of CO2 as a single U.S. state such as Florida, Michigan or Ohio.

To put it another way, in 2010 human industrial CO2 emissions were 135 times higher than volcanic emissions. Human emissions dwarf the CO2 impact of volcanoes.

“Well your source is obviously wrong!” he thundered, with a sudden indignation that stunned the others around the table. “I have evidence that proves you are wrong!” He gestured towards the next room for some reason.

I asked him to state his sources, so that we could cross-check the evidence that sat behind our respective positions. Since I had cited a particular report, I encouraged him to search for the paper I quoted, which equated volcanic emissions to that of a single U.S. state.

His face grew visibly red with anger. It became clear he was irritated by my questions, especially given the 40-year age gap between us.

“Boy, I am a Fellow of the Royal Statistical Society!” he snapped, “I know what I am talking about! You are wrong.”

It became clear that his mind could not be changed. He simply knew he was right and I was wrong.

Intermission: my understanding of climate science

Here, I will quickly state my understanding of climate science, and how I formed my view.

I hold this view because of the scientific literature. For me, the most convincing evidence is James Powell’s meta-study of peer-reviewed scientific articles published between 1991 and 2012 found the following results: 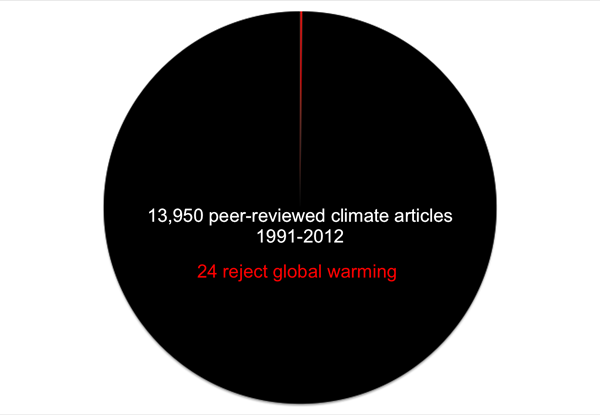 This is an overwhelming majority of experts who agree that a scientific phenomenon is happening. Doubt has left their discussions. It is a scientific consensus.

If a similar consensus of astronomers stated that a meteor would collide with Earth in 50 years time, I am sure we would be acting with haste to avoid catastrophe.

Those who criticise global warming do not use credible scientific channels. Instead they use blogs, mass-market books, and talkback radio. These are platforms that lack the fact-checking rigour of scientific peer-review.

Bizarrely, these contrarians expect us to believe them because their claims have not been scrutinised by the peer-review process. This is Dark Ages thinking that does not belong in our modern era.

Despite never being able to 100% know whether something is true, it is illogical for us not to act on global warming because of this possibility of future disproof.

Today, the scientific consensus accepts global warming is occurring. We would be wise to act in response to this consensus.

The mindset of a climate denier: the Dunning-Kruger effect

In the hours following the dinner, I kept replaying my conversation with the red-faced climate denier.

My mind reeled as I tried to comprehend what could possibly cause him to cling to this “volcanoes!” explanation with such desperation. I simply could not understand his refusal to even consider reading the paper I cited. Why was he so afraid of encountering evidence that contradicted his views?

Reliving the conversation in my mind after dinner, I recalled the infamous Dunning-Kruger effect. The Dunning-Kruger psychological experiments probed the mindset of “illusory superiority” in people who over-estimate their talents. 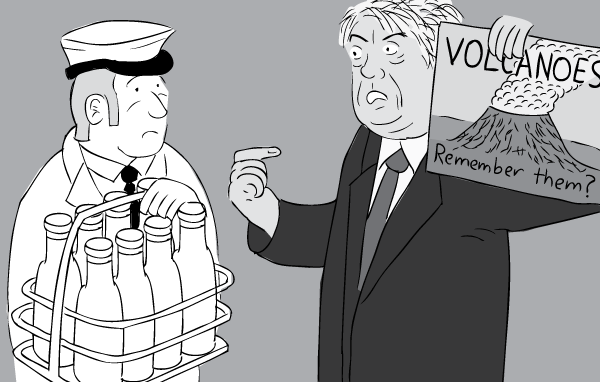 My red-faced colleague’s other flaw was holding his beliefs too close to his chest. By comparison, I was holding my views about climate change at arm’s length. I was prepared to sit down and read his evidence, and discuss things openly. I was happy to challenge my own beliefs.

By holding his beliefs so closely to his chest, he became personally wounded when I questioned their validity. They had become such an integral part of himself that he could no longer evaluate them objectively. He responded with rage and bluster.

My cartoonist-mind is like a supersaturated solution, filled with knowledge of various scientific experiments, and pop-culture phenomena. All it takes is a ‘seed’ to instantly trigger the idea for a comic.

(For example, I knew about St Matthew Island and Rat Park for years before I realised I needed to draw comics about them. For whatever reason, those incidents had not been linked with “comic” in my mind.)

Once the ‘seed’ of “Dunning-Kruger” entered my mind, a crystal immediately grew out to “comic” and then “climate-denying uncle”(!), and then to “Jimi Hendrix”.

Don’t ask me why my mind connected those concepts, but it happened. And it happened instantly.

The pattern was instantly complete. I would exact my revenge on this red-faced bloke in comic format!

I gave myself a 7-day deadline, which proved realistic. I wrote, drew and published the comic after 75 hours of work.

An experiment in popularity: releasing Hendrix Uncle with zero promotion

I drew Hendrix Uncle while in the middle of a much larger cartooning project, which is still otherwise consuming my attention and effort. I will email my newsletter when this bigger project is revealed, later in 2015.

After hurriedly writing and drawing Hendrix Uncle in a week, I have now silently released it to the world.

I released this comic without so much as an email or Facebook post to my friends and family. I will put zero energy into promoting it. Indeed, I will deliberately avoid mentioning it when someone asks me “so, what have you been working on?”

If you are reading this now, the comic has spread across the web through sheer word-of-mouth, from a ‘seed’ that I did not drop into the beaker.

It is its own supersaturated solution experiment. An experiment into how globally-relateable the “climate-denying uncle” phenomenon is.

You can substitute “climate” with “vaccination”, or “uncle” with “workmate”, if you like. There are many flavours of illusory superiority in the world.

How big will the crystal grow?

‘Scuse me while I kiss the sky.

PS: Comics like these don’t grow on trees. I worked a 75-hour week creating Hendrix Uncle.

Be my patron. Support my comics with a PDF download, via credit card, PayPal or BitCoin. The $2.00 suggested price can be edited, allowing you to ‘tip’ me a customised amount.

arian prabowo: Concern about over reliance on peer review—or 'scientism'—is well taken. On the other hand, when important decisions need to be made, such as how to allocate finite resources, and whether and how to prepare for a world with diminished available net energy (see Stuart McMillen's comic about Buckminster Fuller and Energy Slaves), don't you think it makes more sense to rely on "generally better sources of accurate and credible information"?

Hi Stuart, I really like your comic and essay. I just happened to be a critical person, perhaps beyond what others might consider normal.The way you present your encounter, it seems that both you and the Fellow of the Royal Statistical Society both subscribe to the word of some authorities. It just so happens that you believe that the scientific community is a more superior authority because they are peer-reviewed. Although being a scientist myself, I agree that they are generally a better source of accurate and credible information, I don't believe that being simply being 'peer reviewed' is a sufficient evidence to support it's validity. My point being, I think it would be of great benefit to your readers, or just perhaps me in particular, if you could justify the superiority of academic and scientific publication over their counterparts upon more solid ground than just 'peer review'. Otherwise, others could just point out the weaknesses of peer review, of which there are quite a few, and render your essay of its rigor. Moreover, you mentioned that "holding his beliefs too close to his chest" is a flaw. I would like to disagree with that. I think most people, including myself and I suppose you as well, will hold a number of believe as self-evident and unquestionable. For example: "I exist", "We don't live in the matrix", "Human have rights", "freedom of expression". Hence, maybe he has a more fatal flaw, somewhere else.Finally, Indonesian is my mother tongue and I would love translate your comics to Indonesia. How do you reckon I should proceed about that?P.S. I found this comic through you top ten list, so I'm not sure what are you referring to when you wrote about zero energy in its promotion.