Dumbwaiters as a metaphor: the way we hide our global supply chains

The dumbwaiter is a compelling metaphor for the way we hide the unpleasant parts of our supply chains. This essay expands upon the ideas of my most recent social commentary comic: What the Dumbwaiter Hides, which I am releasing today:

What the Dumbwaiter Hides
Thomas Jefferson invented the dumbwaiter to hide the slaves that he used to run his mansion. Today, we use the ‘dumbwaiter’ of globalisation to hide the dark parts of our supply chains.
http://www.stuartmcmillen.com/comic/what-the-dumbwaiter-hides/ [54 pages]

Go and read the full comic, then come back here to read this discussion piece.

Thomas Jefferson: inventor of the dumbwaiter

As well as being the third President of the United States, Thomas Jefferson was a keen inventor. Jefferson invented the dumbwaiter, and other devices that allowed food and drinks to be cleverly transported throughout his Monticello mansion.

Although Jefferson was intellectually opposed to slavery, he was still a slave-owner with dozens and dozens of slaves working on his property at any one time. 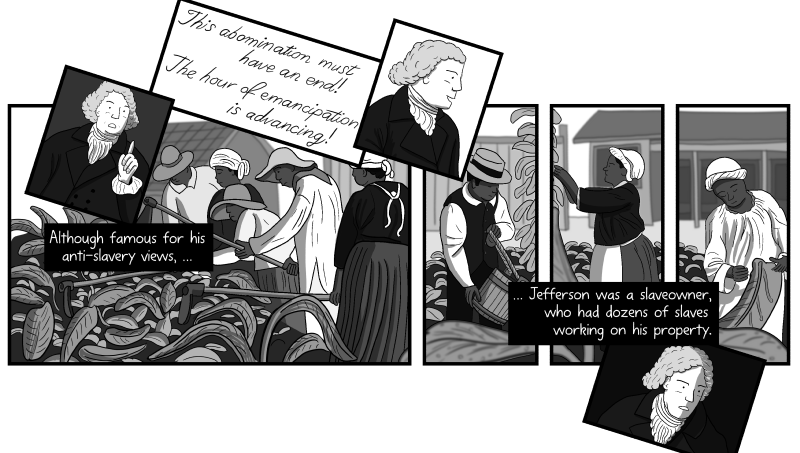 Thus, the dumbwaiter was a device that allowed Jefferson and his guests to cloak their involvement in slavery.

The dumbwaiter hid it all away. 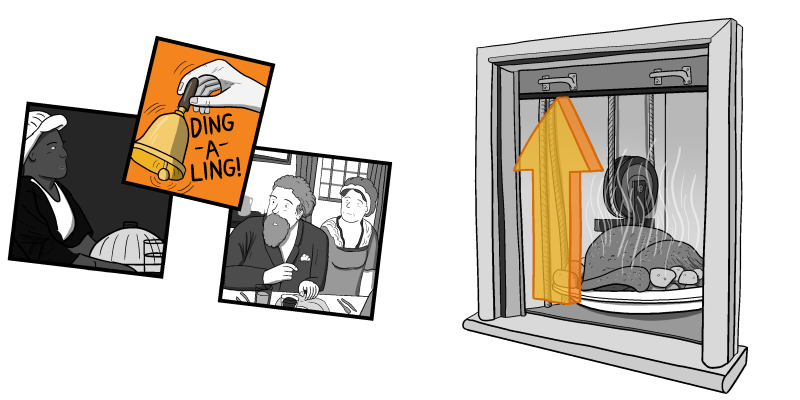 The ‘dumbwaiters’ of modern life: what is hidden from our view

In my comic, I extend this ‘dumbwaiter’ analogy to modern life. 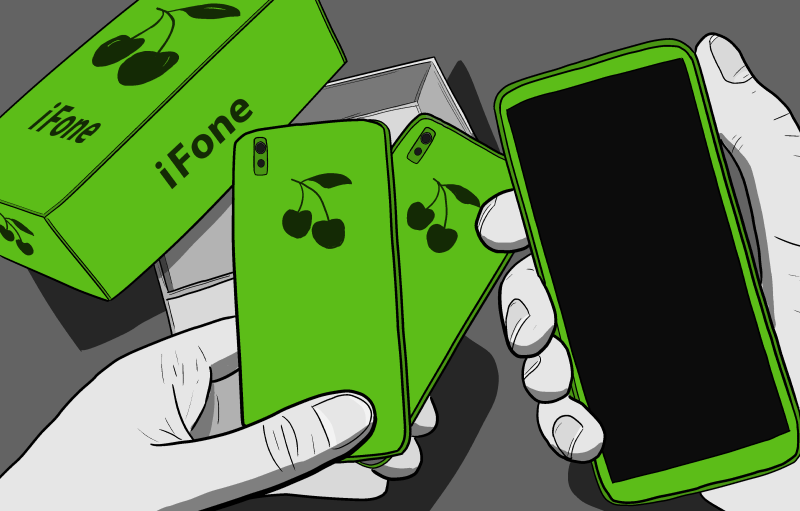 I argue that the geographic distance of globalised capitalism allows us to shield ourselves from the unpleasant parts of our supply chains, that we would rather pretend didn’t exist.

Sweatshops, repetitive jobs, mining, clear-cutting. These are the things that the ‘dumbwaiter’ of geographic distance hides from us. 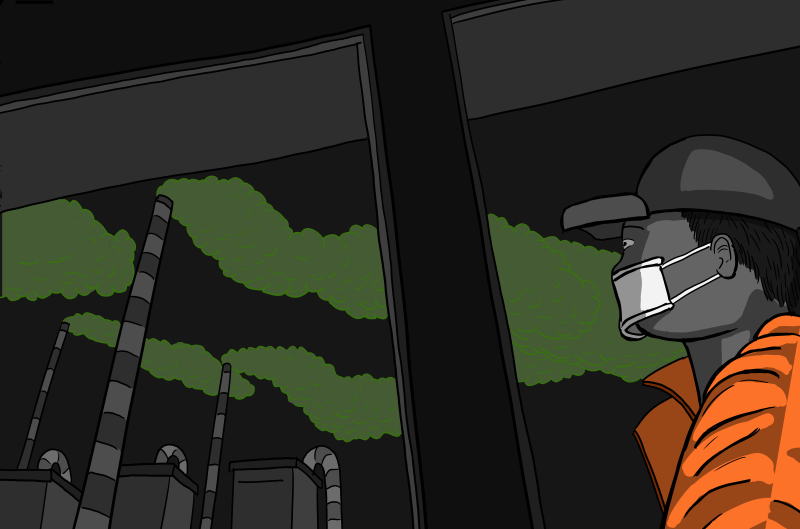 In my comic What the Dumbwaiter Hides, I use a powerful term: ‘sacrifice zones’. This is a term that I first came across in Naomi Klein’s book This Changes Everything (2014). A quote from pages 169-70:

Sacrifice zones … [are] … places that, to their extractors, somehow don’t count and therefore can be poisoned, drained, or otherwise destroyed, for the supposed greater good of economic progress. […] In order to have sacrifice zones, you need to have people and cultures who count so little that they are considered deserving of sacrifice.

In my comic, I depict some of the sacrifice zones of Earth: the polluted and disrupted sites that provide the resources to feed the industrial machinery. 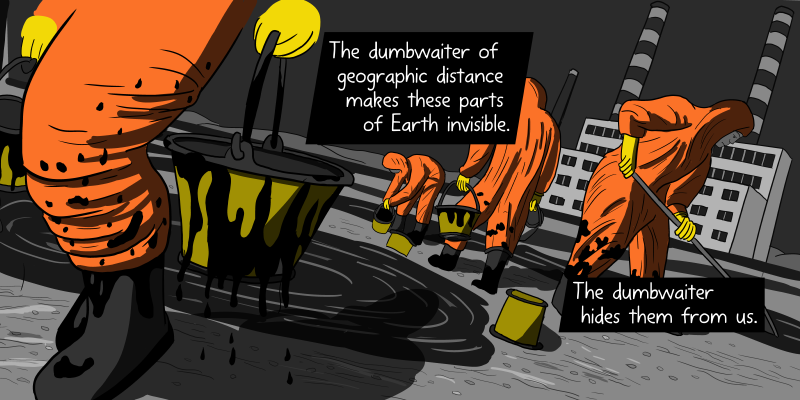 I also show some of the hot, noisy, repetitive, demeaning jobs that are used to create many of the products that enter our lives.

All of these are invisible to us, hidden behind the ‘dumbwaiter’ of our globalised economy. 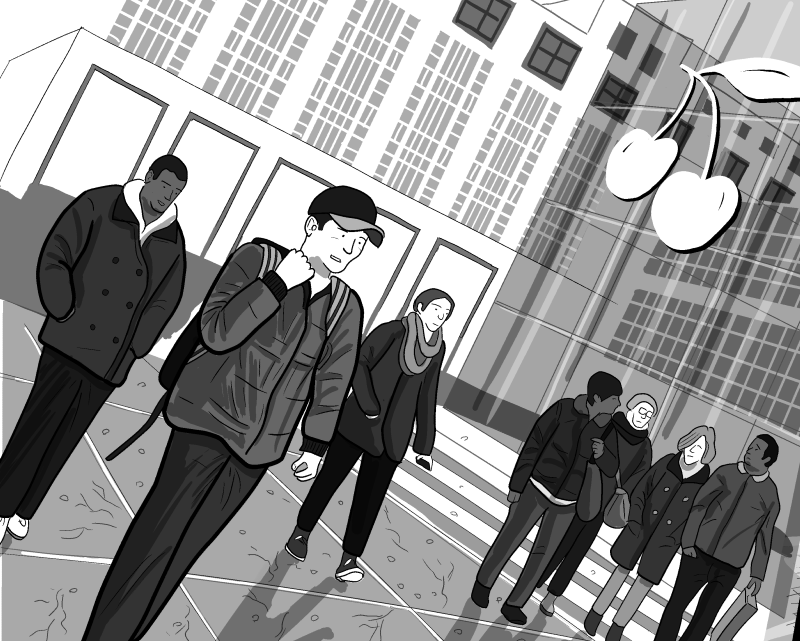 My own dumbwaiters: I’m guilty too

This probably goes without saying, but I know that I use ‘dumbwaiters’ in my lifestyle. I’m as guilty as anyone else.

Everything from the clothes I wear, through to the cookware in my house features a long supply chain hidden behind dumbwaiters. I am also aware of the huge numbers of invisible ‘energy slaves’ that power my lifestyle, as described in my comic Energy Slaves and its accompanying essays. 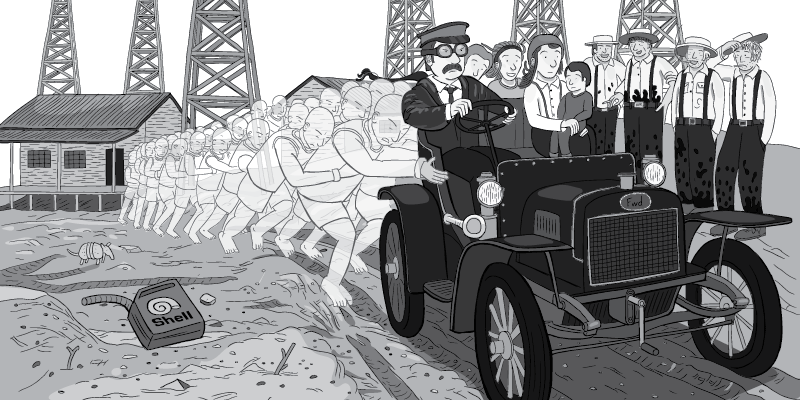 Rather than declaring myself holier-than-thou, I want to acknowledge my part in the problem. Then I want to understand and improve the supply chains that feed my lifestyle. Hopefully if we all embark on this journey together, the world will be a better place. 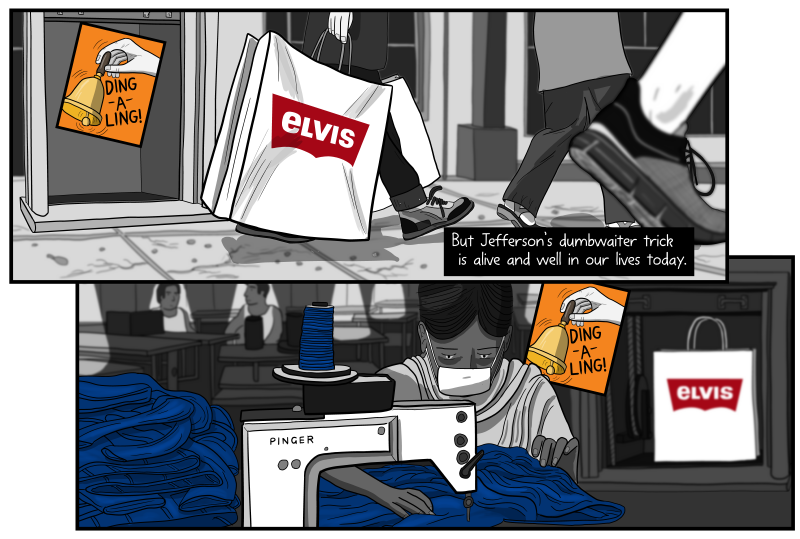 My inspiration for What the Dumbwaiter Hides

My direct inspiration for this comic came from two places. Firstly, a reference to Jefferson’s hypocritical use of slaves on pages 1-2 of Andrew Nikiforuk’s The Energy of Slaves: Oil and the New Servitude (2014). I read this book during the research for my Energy Slaves comic. Secondly, Douglas Rushkoff mentions ‘the dumbwaiter effect’ on page 19 of Throwing Rocks at the Google Bus: How Growth Became the Enemy of Prosperity (2016), specifically referencing Jefferson’s invention and use of the dumbwaiter. I highly recommend both of those books. 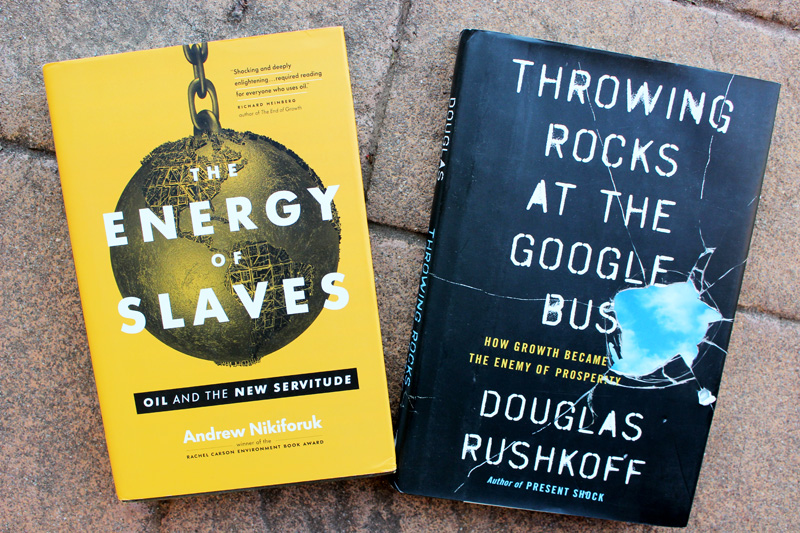 Further inspiration came from my favourite comedian Damien Power‘s podcast Power to the People, which discussed the hypocrisy of righteous people who are ‘offended’ on social media. In episode 34 of his podcast, Damien discusses the blindspots that ‘social justice warriors’ have to their own culpability. He gives the specific example of people who use their iPhones to vent about injustices, while ignoring the brutal labour conditions in the supply chain of their iPhone. Listen to that excellent podcast. 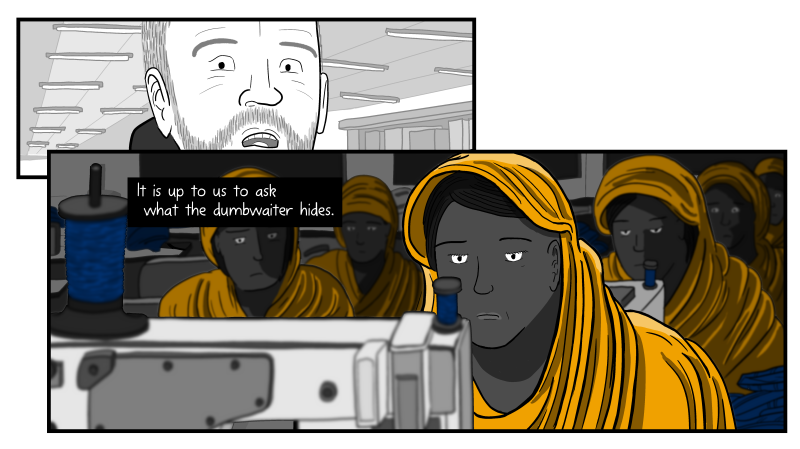 Interesting reading: from my Dumbwaiter research

Finally, here are some other interesting pieces that I read during the research for What the Dumbwaiter Hides:

Yet, in the words of Lisa Hix: “Many of these museums let visitors walk away without considering that all of these exquisite things were accumulated through the violence and forced labor of slavery.” 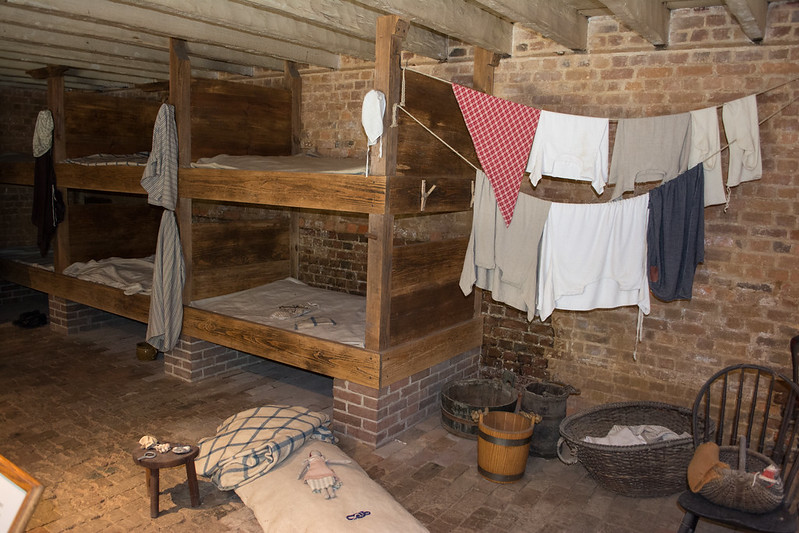 Hix notes that “Visitors touring plantation-house museums are generally expected to admire the rich, white enslavers and sympathize with their plight.” Visitors to these colonial manors are invited to “imagine themselves belonging to this extravagant, exclusive world”. To identify with the worldview of the slave-owners, rather than to identify with the plight of the slaves. 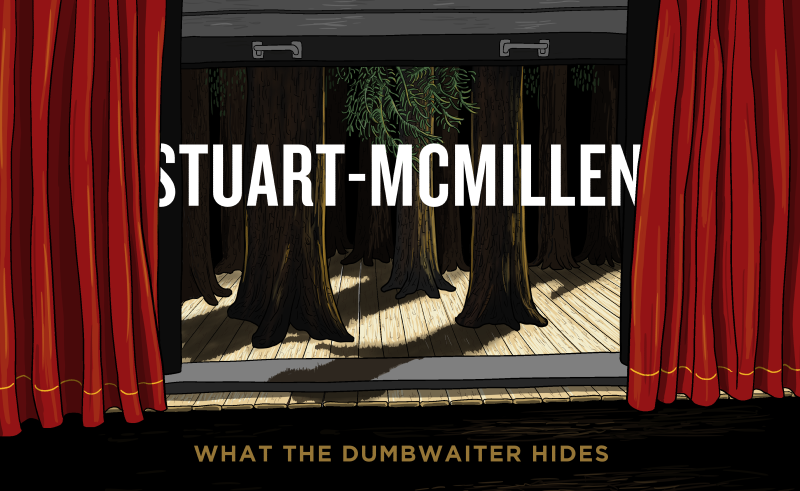 My comic What the Dumbwaiter Hides is a self-directed project that I researched, wrote, drew, and published myself. But it is made possibly because of the generosity of my readers who admire my work. My passionate readers pledge recurring monthly donations that fund my work. Right now, I have 168 individuals who are pledging a cumulative US$1,037 per month to my Patreon crowdfunding page. But, I need that amount to be higher if this is to be a long-term sustainable career for me.

If you enjoyed the 54-page reading experience of What the Dumbwaiter Hides, and would like to read more comics like it, please donate to support my work. Support my ongoing comics creation by joining my Patreon crowdfunding campaign now via crowdfundstu.com.