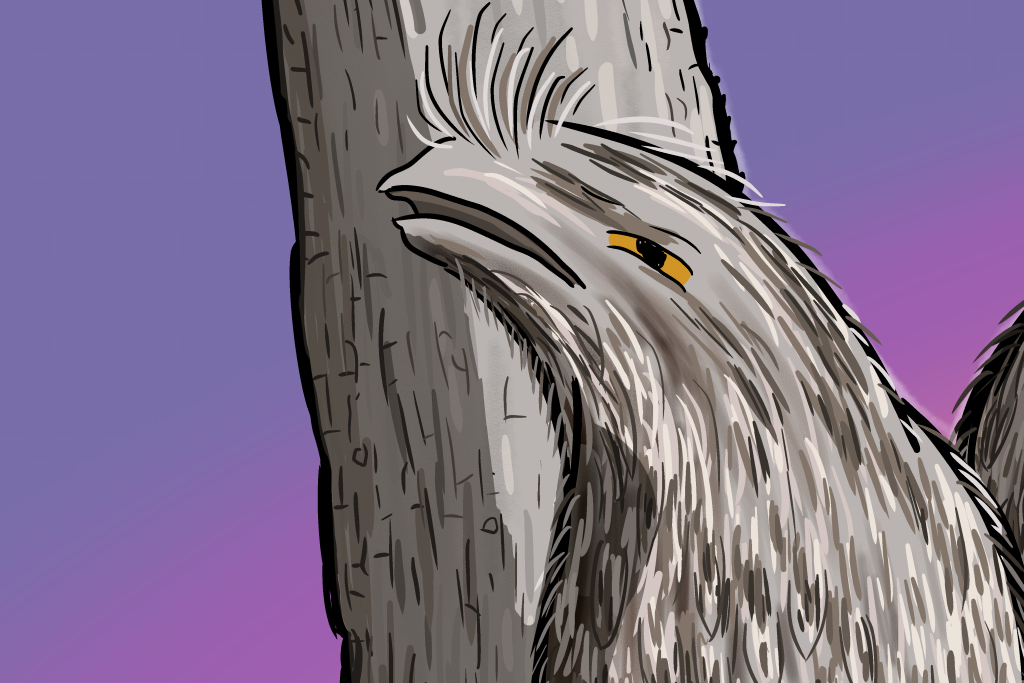 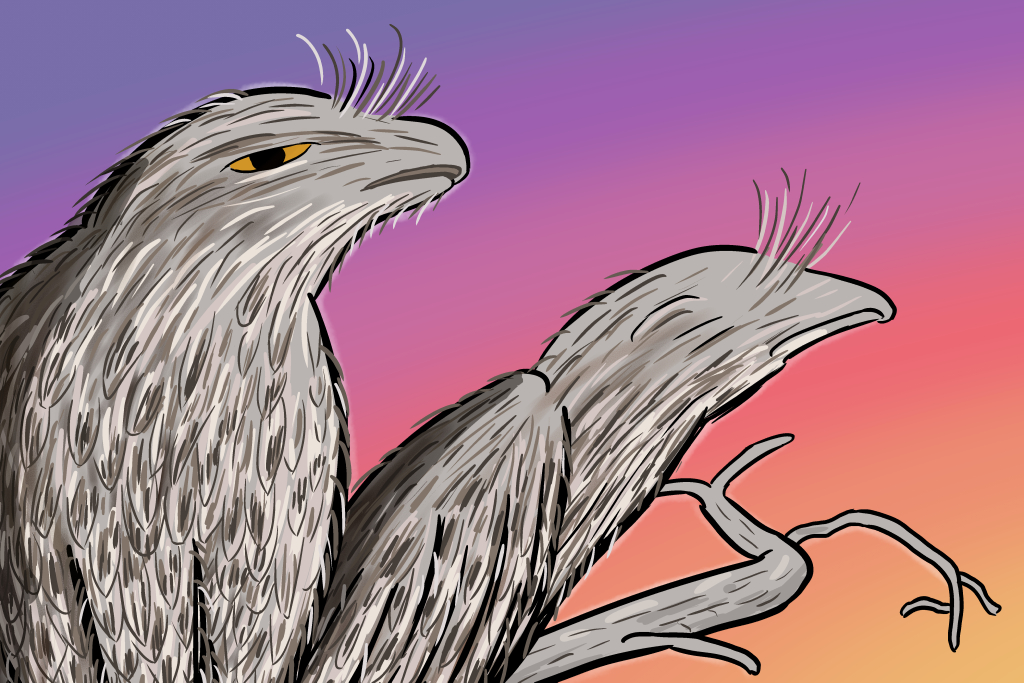 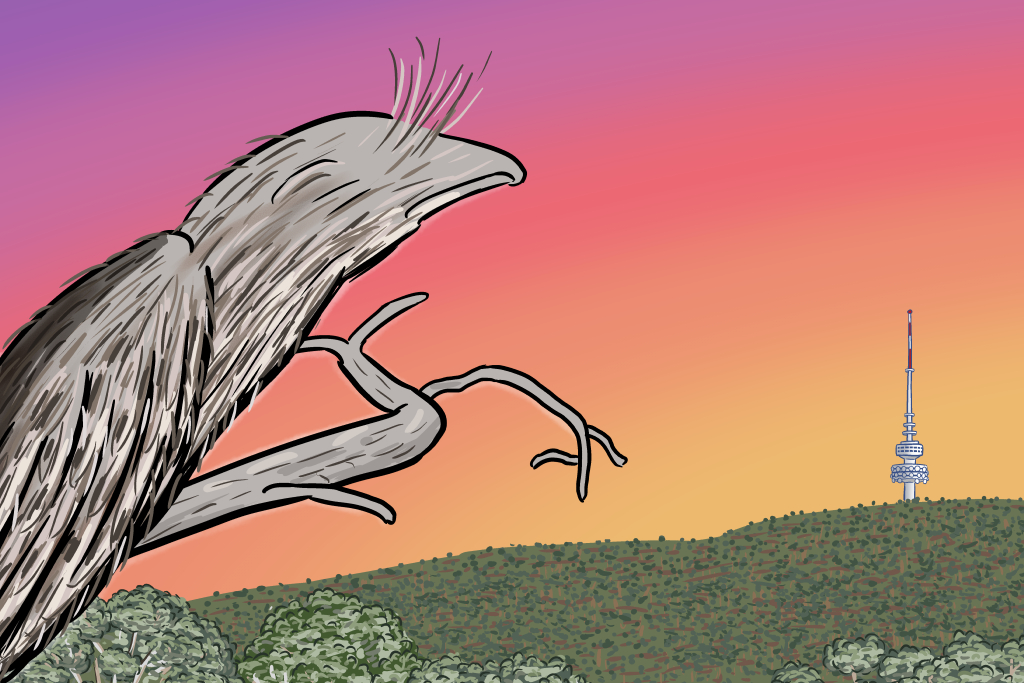 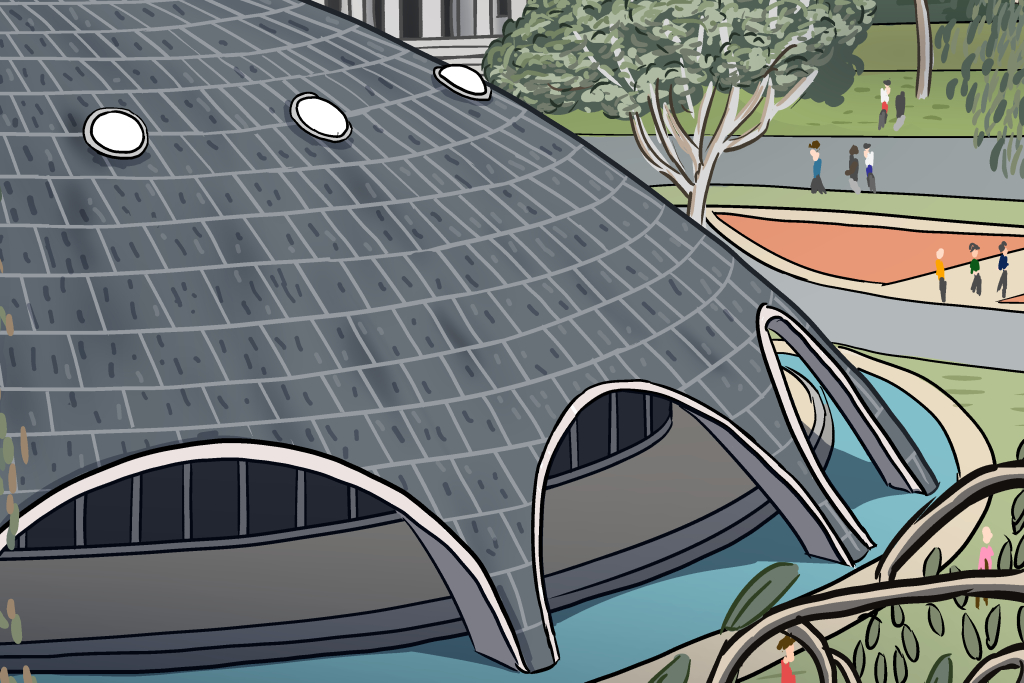 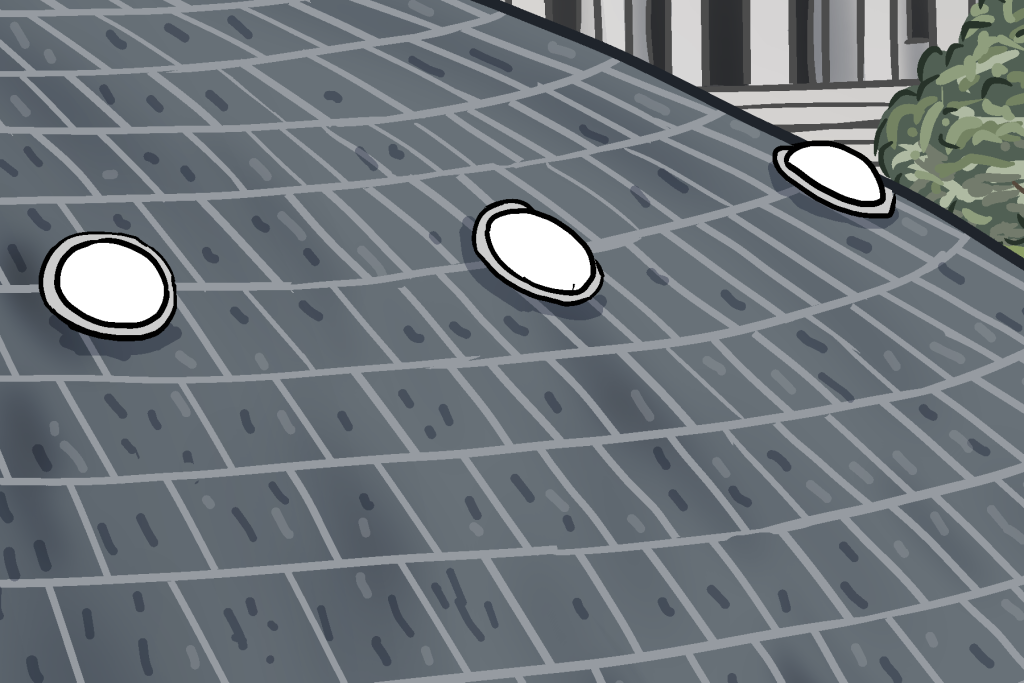 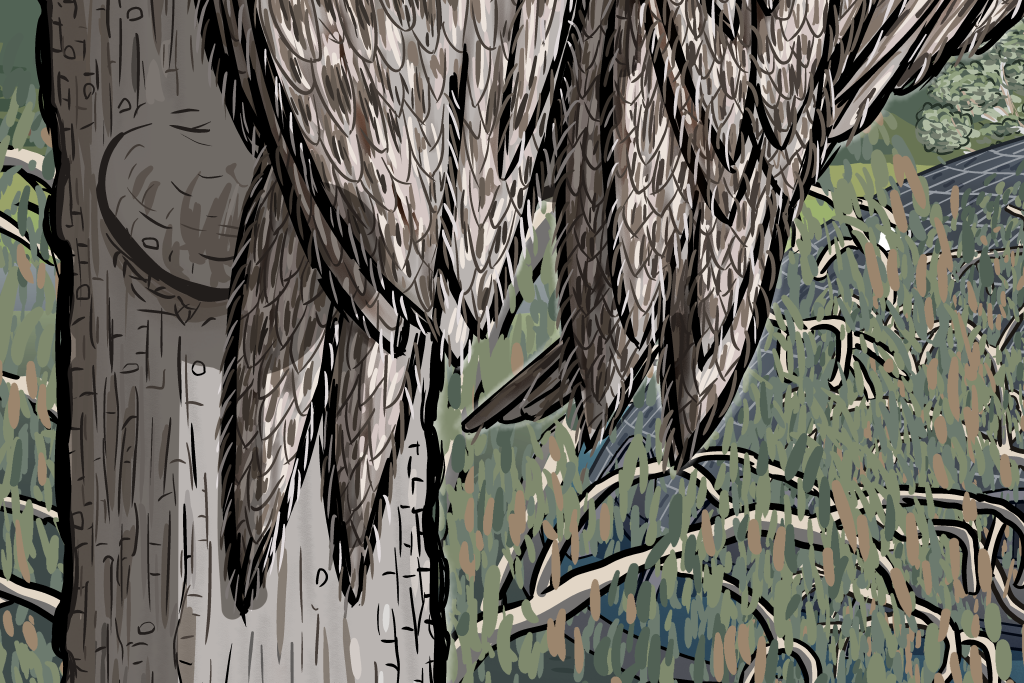 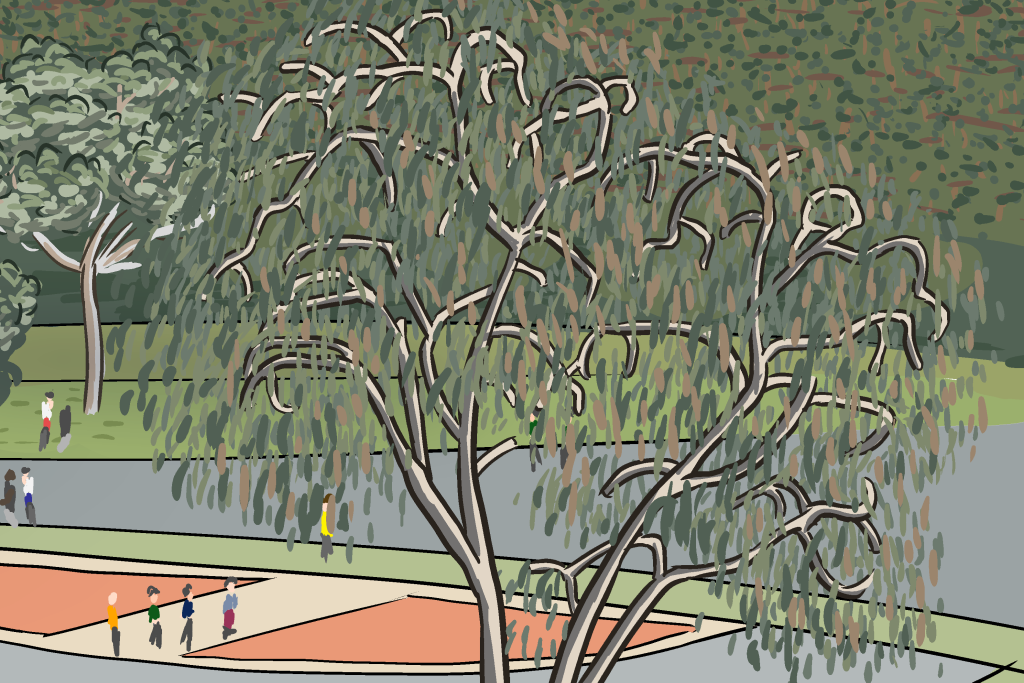 Tawny frogmouths are a nocturnal species that are similar to—but different from—owls. Whereas owls hunt with their powerful talons, frogmouths have weaker legs and primarily feed with the use of their mouths.

Tawny frogmouths are well camouflaged birds with feathers that often match the trees that they roost in. Frogmouths often strike a pose that makes them look like they are a snapped-off tree branch. 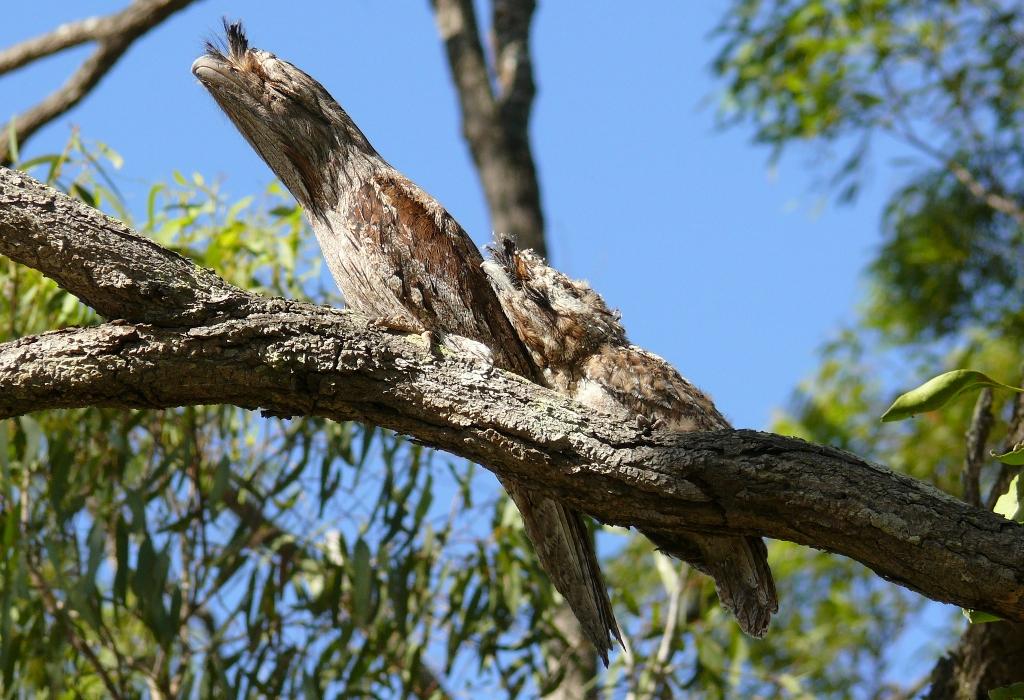 Image: Tawny frogmouths camouflaging on a tree branch by A McDougall, Queensland Parks and Wildlife Service, 2007 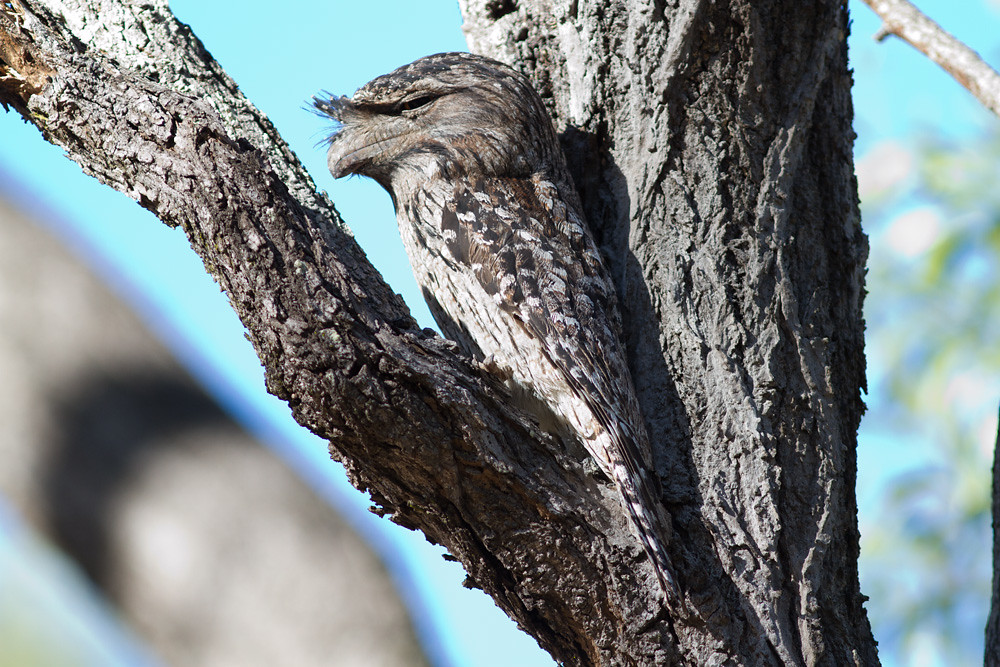 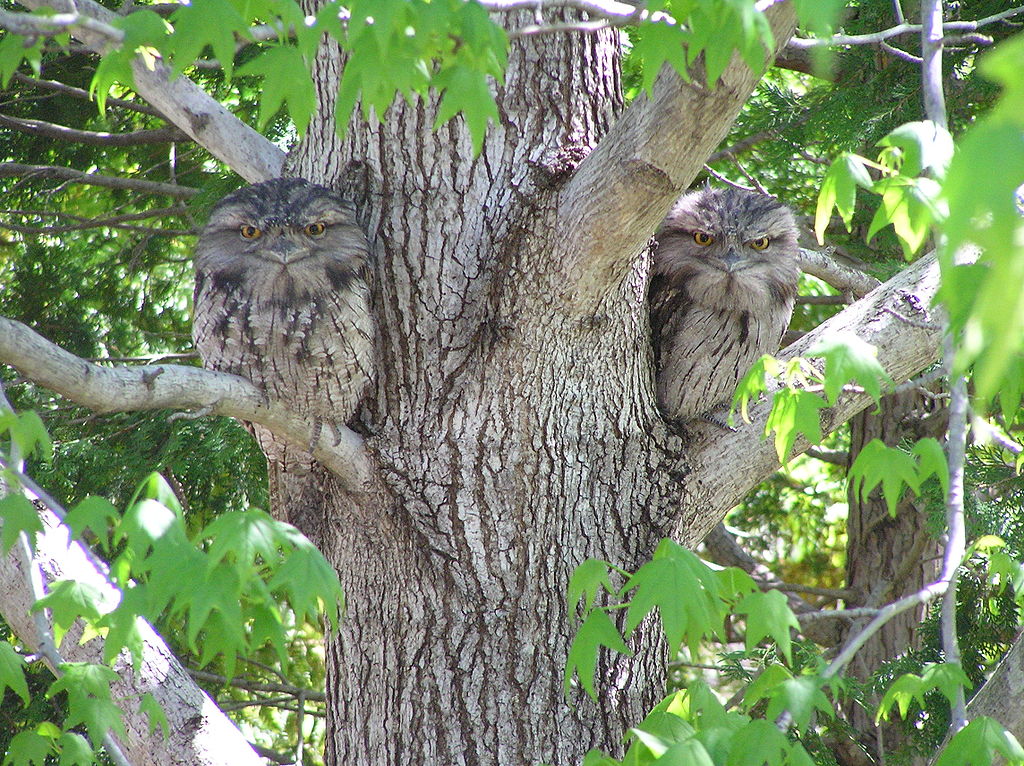 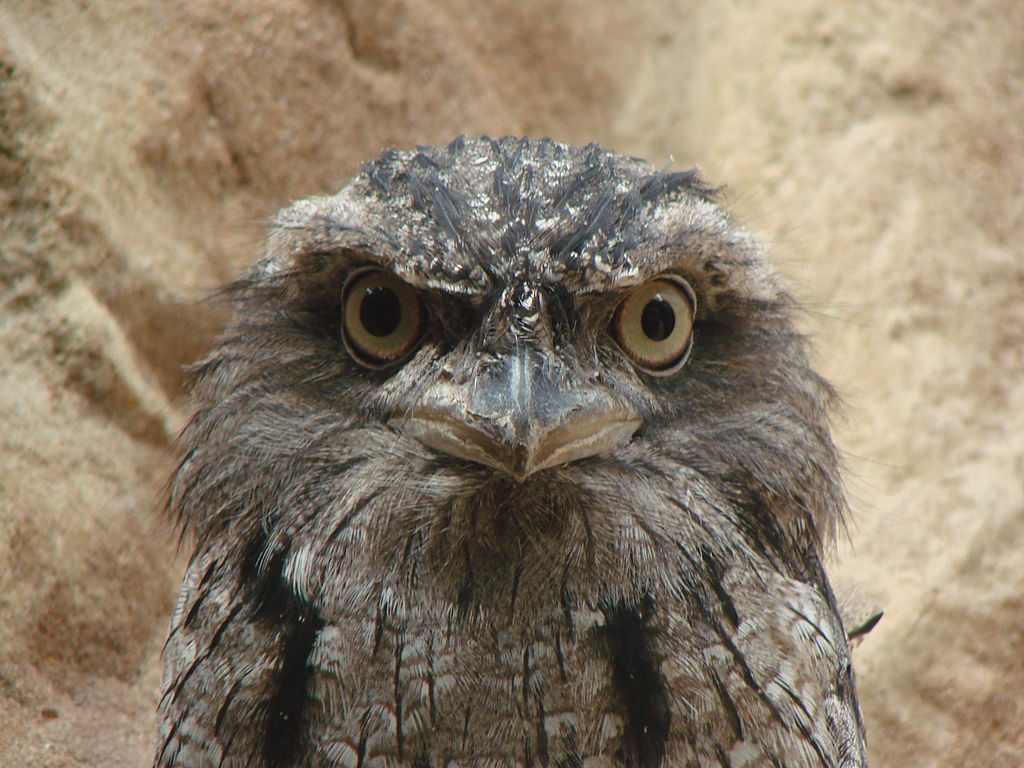 Apparently, researchers have found that the Tawny frogmouth is the ‘world’s most Instagrammable bird’. In other words, it has facial features that are the most aesthetically pleasing, and most likely to get ‘likes’ on social media platforms.

The location: the Shine Dome

The scene’s background features a sunset scene of the Shine Dome, an iconic building that is located near the Australian National University in the shadow of Black Mountain. 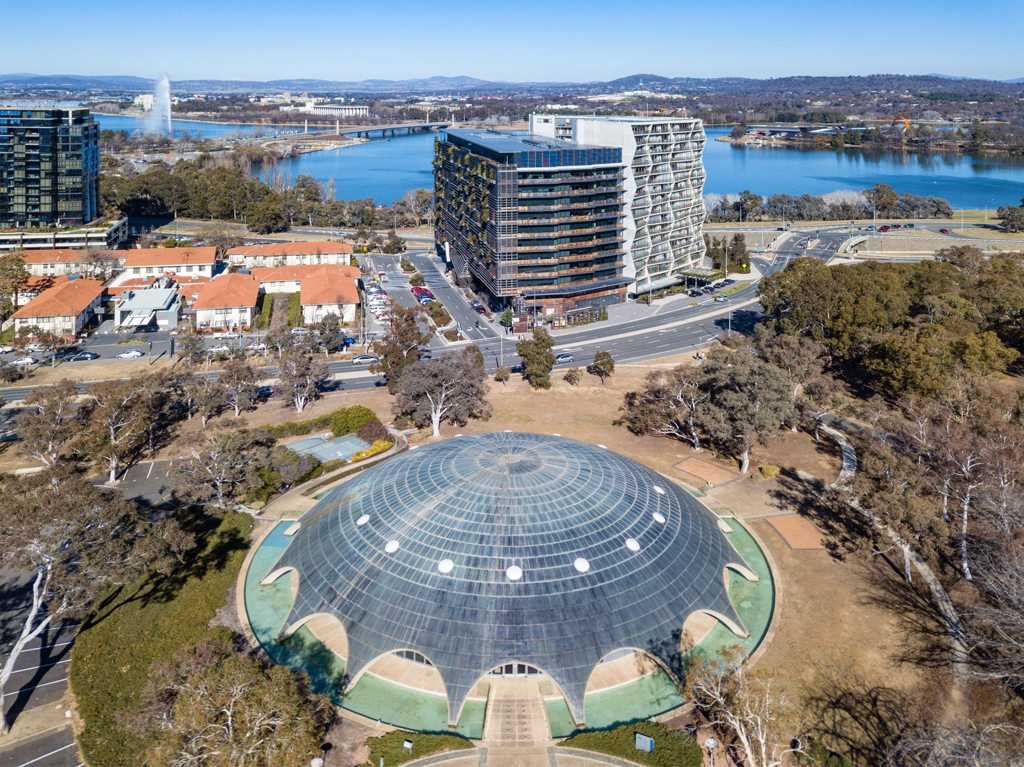 Image: Happy 60th to the Martian Embassy! by liam.cbr. My scene is drawn from the perspective of the trees between the carpark and the building with the red roof, pictured on the left hand side of this photo. 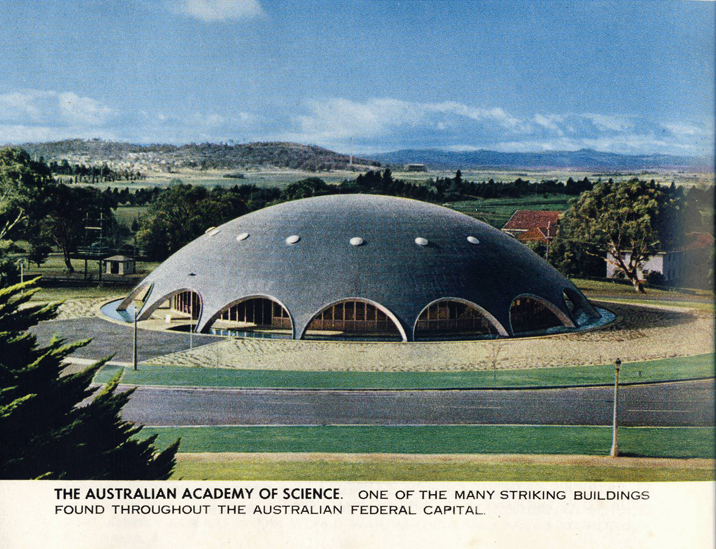 Image: Shine Dome illustration circa-1960s from Australian government publication. This has a similar view as the above photograph, but seems to predate the filling of Lake Burley Griffin in 1964.

The Shine Dome was completed in 1959 using 710 tonnes of concrete. The dome holds itself up, without internal walls to support the weight.

(As a Buckminster Fuller fan, I should point out that if the structure had been constructed as a geodesic dome rather than a conventional dome, the total mass of materials needed to construct the dome would have been significantly less than the conventionally-built Shine Dome.)

The Shine Dome is owned by the Australian Academy of Science, and is available to be booked by organisations hosting events of various sizes. the building’s interior features a plush conference chamber featuring nice wood panelling and large comfy seats. 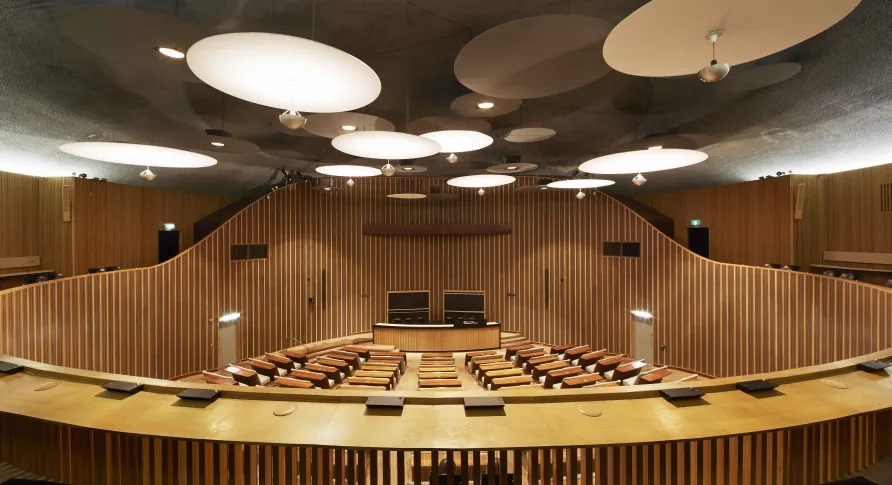 As well as providing space for events, the building’s basement houses storage for the Australian Academy of Science’s historical records.

The Shine Dome is popularly nicknamed the “Martian Embassy“; a reference to both the building’s unusual ‘space age’ architecture, as well as Canberra being the home to numerous international embassy buildings.

I liked this article about Strange but true facts about Canberra’s Martian Embassy, featuring this example of a wholesome uni student prank:

The Canberra Times of July 31, 1964, reported: “Late last night a ‘mysterious object’ was sighted on the dome of the Royal Australian Academy of Science building, Acton, which uncannily resembled a toilet seat.” Some 10 years later the students struck again, this time by painting a series of footprints up the side of the dome leading to a toilet bowl perched atop the dome. Talk about a royal flush!” 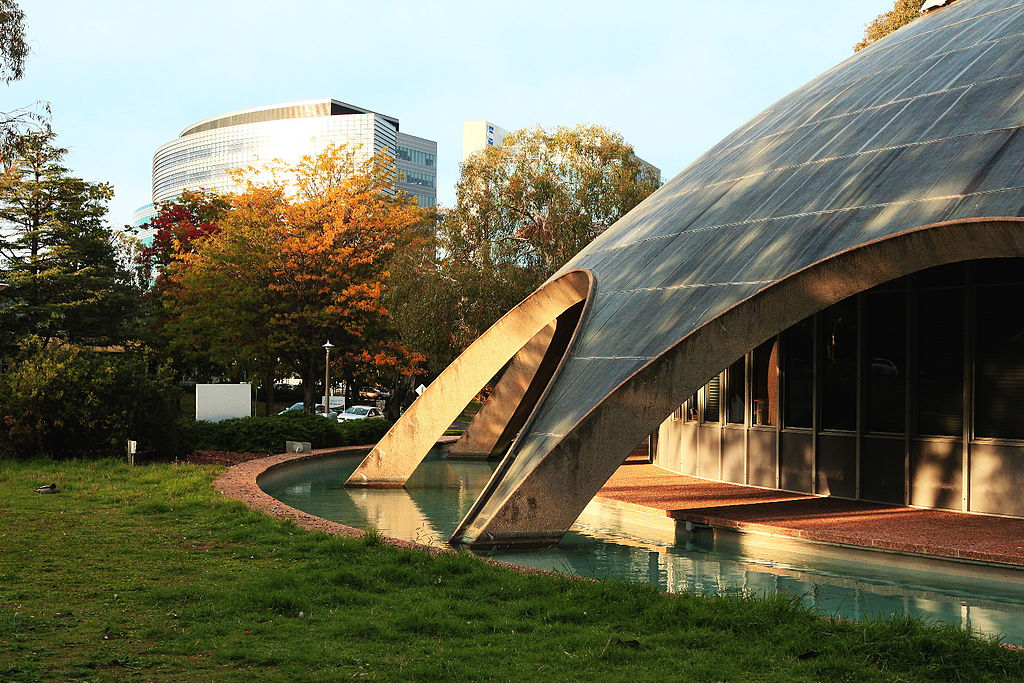 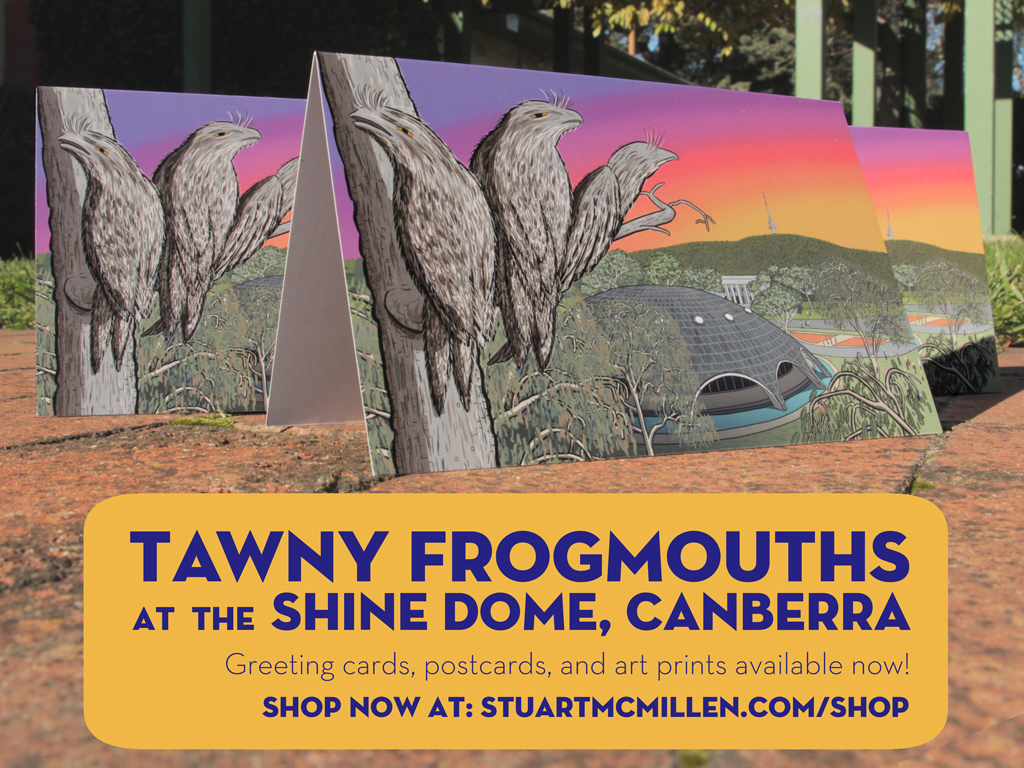 Support my work by buying this artwork as a postcard, greeting card or signed and numbered art print from my online store.
Visit the Tawny frogmouths at the Shine Dome product range category, or use the following links for these items on my web store: 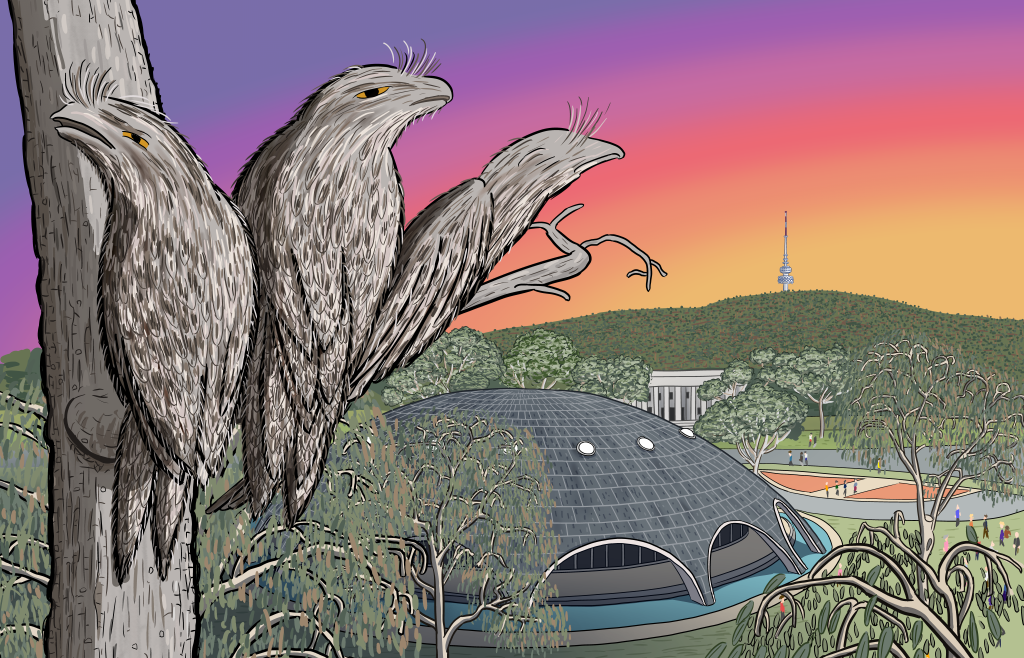 An artwork from my Canberra Birds series, featuring an Australian magpie flying at sunrise near the National Arboretum Canberra. This blog post explains more about magpies, as well as the scene's location.

I drew a detailed cartoon illustration of a rainbow-crested cockatoo flying above an aerial view of Canberra. This is a commission artwork to illustrate the podcast A Community in Isolation.