I was inspired to list my Top 10 Essential Graphic Novels because of the mass-ignorance towards comics and graphic novels.

As a cartoonist myself, I think that comics are a powerful and worthwhile medium for storytelling and communication.

However, I know that most people are yet to ‘see the light’ as to the merit of comics. They still perceive comics as a medium that is primarily used for childish or juvenile stories. Thus, superhero comics (Superman and Batman) and gag-type comics (Garfield and Peanuts) are the two genres that most people imagine when they think of comics.

Many people are surprised to learn about my non-fiction comics about social, psychological and environmental issues. They are especially surprised when I stress that they are not satirical or humourous. Instead, they are merely designed to be explanatory and thought-provoking.

It is clear that I need to help expand people’s perception of comics and graphic novels.

Books for all readers: the Top 10 Essential Graphic Novels

I decided to create a list of graphic novels that would be accessible enough for new readers to appreciate. Thus, instead of choosing highly stylised titles that would be off-putting for newcomers, my book recommendations should appeal to a large percentage of readers. (In this respect, it probably helps that I am not generally a fan of superhero comics, and that the stories I tend to like are naturalistic rather than supernaturalistic).

The result is a 25-minute long video, of me ‘showing and telling‘ my favourite comics. I published the Top 10 Essential Graphics Novels list as two separate videos, which I have embedded below:

The ‘making of’ these videos

In preparation for this video shoot, during late 2016 I re-read many of my favourite comics. I also took the opportunity to borrow highly-recommended titles from my local library‘s well-stocked graphic novel section, and to buy some well-regarded comics that were not in the library collection.

From that point, I set about creating my Top 10 list, focusing on titles that would be the most accessible to new readers of comics. After locking-down my Top 10 list, I was left with a much larger pile of great books that were worthy of discussion. 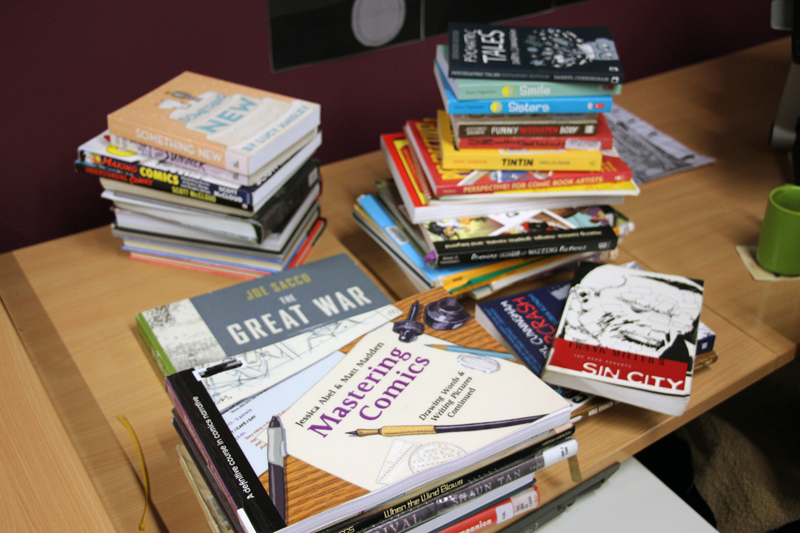 Rather than only discuss ten books, I decided to take the plunge and shoot videos for many more books than would fit in my Top 10 list. I shot these other book recommendations clips in the exact same way as the Top 10, except without any numeric ordering. I am gradually releasing the video reviews of those other books to my YouTube channel.

Thus, something that originally was merely a Top 10 countdown morphed into a project which saw me reviewing 26 different books. I tend to get carried-away with my projects! As you can imagine, a lot of work went into writing the scripts for all 26 videos, as well as shooting the footage of me speaking to camera about all 26 books.

It took a full 12-hour day—the Australia Day public holiday in my mostly-empty office—to shoot the footage of me speaking. Following that, shooting all of the B-roll footage required me to shoot over 600 individual video clips. These were shots of me flipping through the pages, and focusing on particular panels that I wanted to highlight. 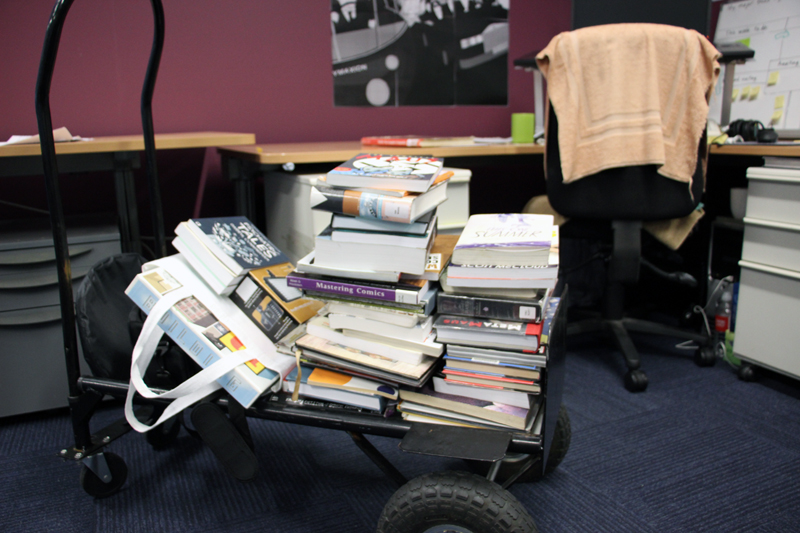 Wrestling with the teleprompter

For the first time in my life, I used a teleprompter when shooting a video. I borrowed a friend’s Parrot Teleprompter, which is a handy device that you can slip in front of an SLR camera’s lens. The device allows you to read refracted text from a smartphone beneath the camera lens.

It is great technology, but since I was reading from an automatically-scrolling procession of text, I had to spend an entire day reading and re-reading the script. Based on these run-throughs I would adjust the line spacing or font size. Eventually, I found a pace that made sure that the words were not appearing too fast or too slow. (This is a problem that professional teleprompters avoid, by having a person to speed-up or slow-down the teleprompter. But I was a one-man operation!)

Lacking the skills to edit the video exactly as I pictured it in my mind, I hired a video editor to work for me, and sent detailed editing notes. (A friend has since convinced me to allowing him to teach me how to edit videos myself for future video projects!)

My first job was sifting through over 2 hours of footage of me speaking through the video scripts, and whittling it down to the best hour. I then created all of the title graphics, and decided how to incorporate the various B-roll shots of the comic books into the videos. There were many, many rounds of changes, as my editor helped me to create the vision that was in my mind.

For the music, I asked my friend Tim Steward from the legendary Brisbane band Screamfeeder whether I could use their songs in my videos. I was thrilled that he gave me his blessing. In this Top 10 video, I used the killer “Dart” (1996) as the theme song for the video, with an instrumental loop of “Stopless” (2000) behind the rest of the videos. They are both excellent songs that you should download right now!

My primary motivation for creating the videos was to share some of my favourite books with the world, and encourage more people to read graphic novels. To be a spokesperson recommending worthy comics.

As afterthought I realised that if people wanted to buy these books after watching these videos, it would be worthwhile including affiliate links. If people bought the books after clicking my affiliate links, I could receive a small kickback from a retailer. I decided to do this with The Book Depository, which is one of my favourite book retailers.

If you decide to buy any of these books after seeing my recommendations, I’d appreciate if you could use the following referral links.

As well as the long videos, I decided to also release the Top 10 Essential Graphic Novels reviews as individual videos. They are embedded below, with the ‘buy’ links immediately beneath each item.

(If you watch the reviews via the individual clips, you will not see my introduction and conclusion comments that occur before and after the countdown. To see the whole thing view my YouTube playlist for the Top 10 Essential Graphic Novels long clips).

Buy This One Summer by Jillian Tamaki & Mariko Tamaki (2014)

Support the medium of comics: share this Top 10 video with friends

Did you learn about some worthwhile comic books from my video countdown? If so, please share this Top 10 Essential Graphic Novels list with your friends. Advocating for graphic novels is the only way that more ‘everyday’ people will choose to read comics.

We must show the world that comics are about more than muscular blokes who wear their underpants on the outside of their clothes!

The best way to spread the word is to either link to this page, or to the YouTube playlist for the Top 10 Essential Graphic Novels long clips). Thanks!

In late 2016 I moved from my home office to a coworking office. I give a quick video tour of my new desk, and discuss my plans for 2017.