Artists and creatives face particular challenges when doing their daily work. Writer’s block, distraction, and self-doubt are challenges that creatives struggle with at the worst of times.

I recently published my blog post Beyond distraction: books about workflow, concentration, and productivity. In that post, I recommended four books about the threats to our self-control by internet technology.

This is a similar list of book recommendations, aimed at artists and those who do creative work. All of these titles explore the challenges that threaten to stop artists from doing their important work. 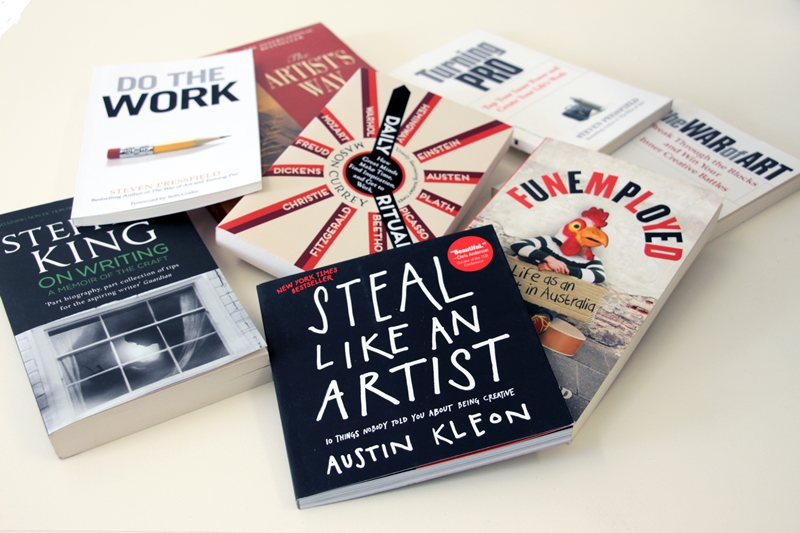 My reading list: books about the challenges of artists and freelancers 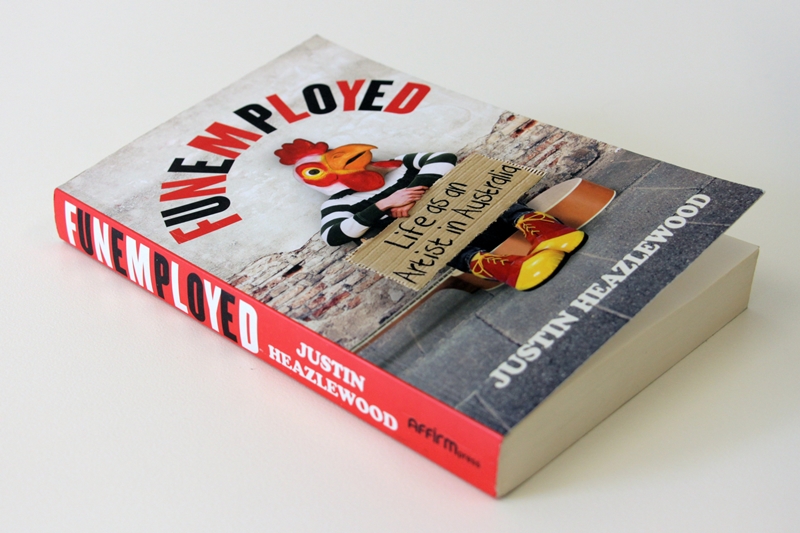 Funemployed: Life as an Artist in Australia by Justin Heazlewood

An entertaining and wise book, Justin Heazlewood charts life as an artist in Australia. He outlines the rewards and pitfalls that artists can expect to encounter on their journey. This includes everything from creative struggles (“second album syndrome”), self-confidence problems (“selling yourself”) and monetary problems, through to the mental health challenges (“the black dog”) and professional jealousies (“the black cat”) that artists often face. There is even a chapter (“Giving Up” about artists who have made the decision to cease working as an artist, and find other vocations.

The book was later turned into the ABC podcast Funemployed, which features interviews with notable Australian artists like Tim Rogers, Judith Lucy, John Clark, and Jen Cloher. But I highly recommend the full depth of the book Funemployed even for those who absorb the podcast. 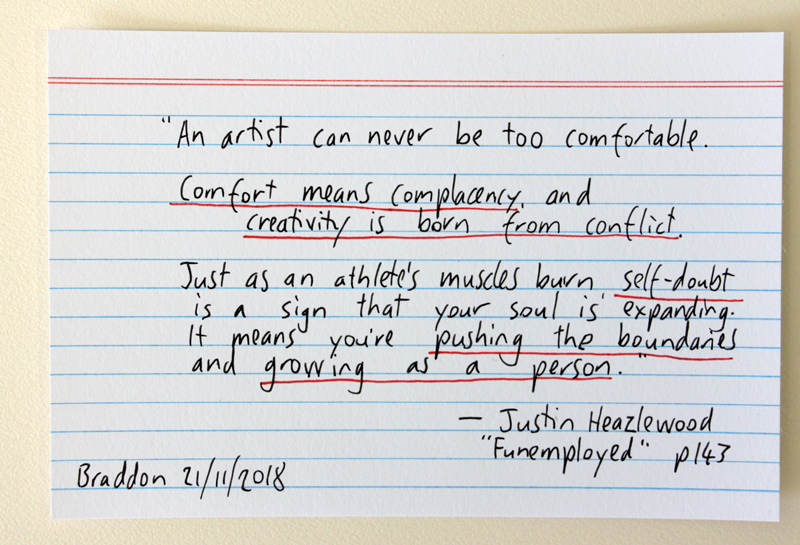 More information about Funemployed: Life as an Artist in Australia (2014) by Justin Heazlewood
Wikipedia | Goodreads 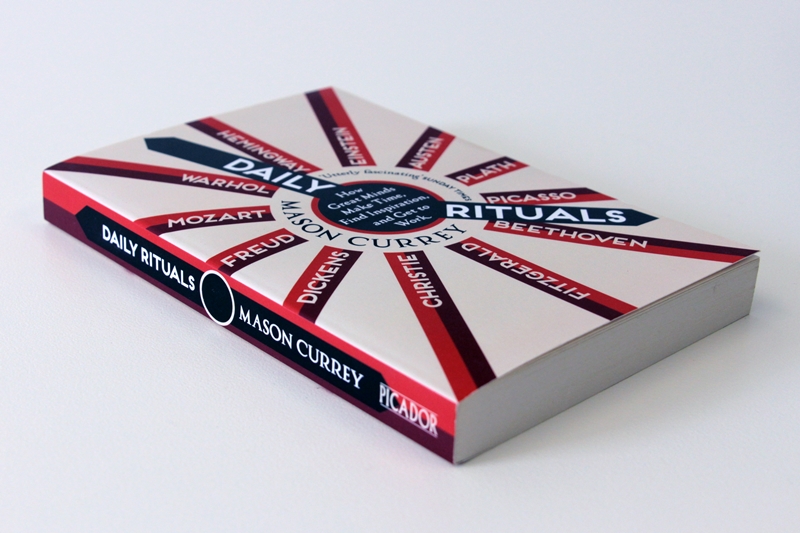 Haruki Murakami rises at 4:00 am, and writes for 5 to 6 hours straight. Thomas Wolfe wrote from midnight to dawn, standing in his kitchen with a typewriter placed on top of his refrigerator. Beethoven composed while walking outdoors, with sheets of music paper in his pockets ready for inspiration to strike.

Mason Currey’s Daily Rituals compiles the work habits of many famous figures: from Dickens to Darwin, Tolstoy to Twain. Currey’s profiles range from those with rigidly consistent work patterns throughout their career, through to those for whom variety was key. (Cutely, Nicholson Baker changed routine for each project, changing both his writing hours and writing locations for each book.)

For me, the benefit of reading Daily Rituals is thinking about the importance of the conditions that cultivate creativity. The special places and special routines that have allowed the great works of art to emerge from the minds of their creators onto the page.

Use Daily Rituals like a menu of possibilities. Borrow and steal some of the best ideas, as you create your own work habits. 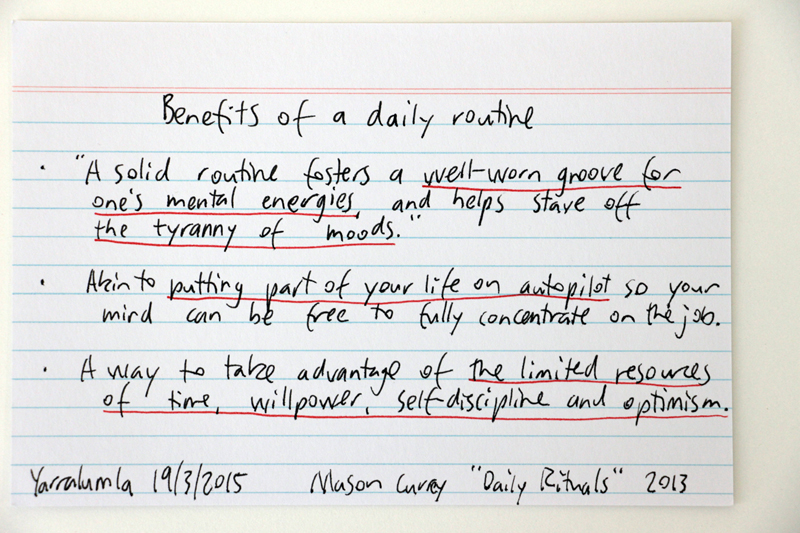 The Artist’s Way by Julia Cameron

Some of the suggestions that Cameron makes includes beginning the day with “the morning pages”: three pages of handwritten stream-of-consciousness writing. This taps into ideas from the subconscious, and ‘gets the ball rolling’ for the creative work that will follow later in the day. The exercise helps us to get past what Cameron calls ‘The Censor’ of our minds, that prevent unfamiliar (and potentially valuable) creative ideas from occurring to us.

Similarly, Julia Cameron advocates continually “restocking the pond” of your imagination. Artists cannot create art without constant stimulus for inspiration. Cameron recommends treating yourself to attending art exhibitions, taking thoughtful strolls, and other self-care activities that add “fish” of inspiration to the “pond” of your mind.

First recommended to me by cartoonist First Dog on the Moon during a coffee catch-up in 2014, The Artist’s Way served an important stepping stone for me settling into the role of ‘artist’ and taking myself more seriously. The Artist’s Way was a big seller when released in 1992, so it should be easy to find a copy of this book. 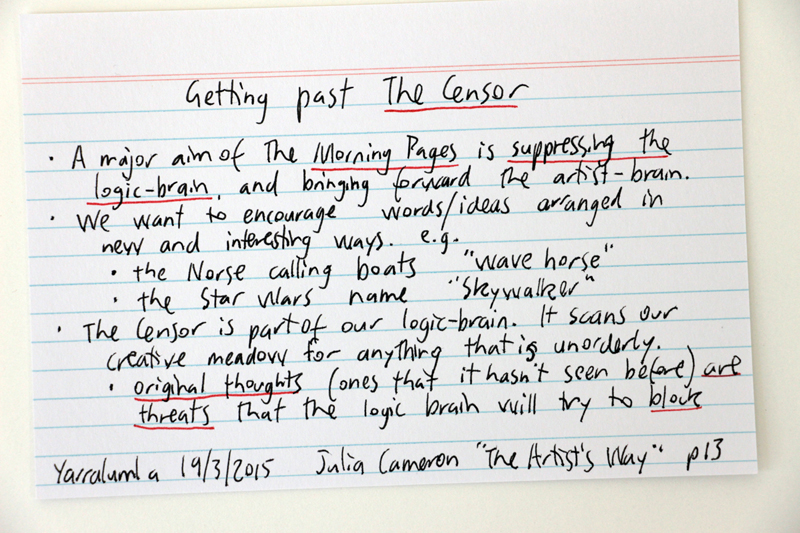 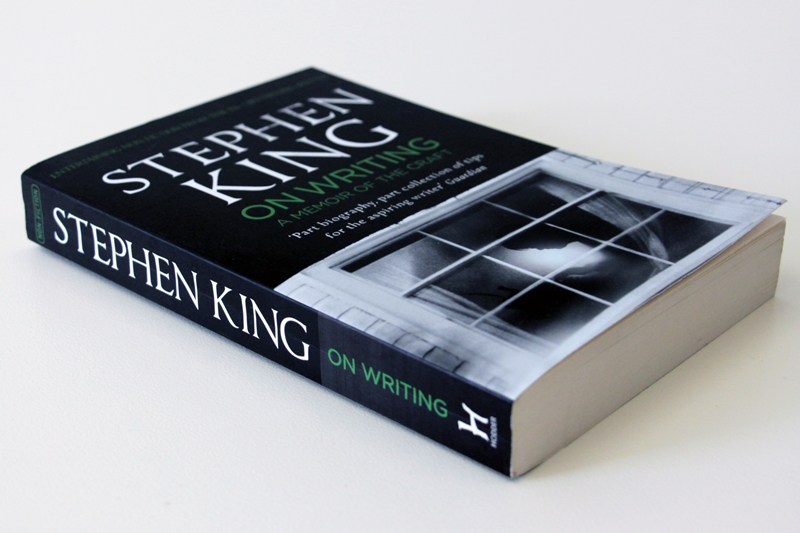 On Writing: A Memoir of the Craft by Stephen King

Although I have not yet read one of Stephen King’s novels, I love this memoir about his working habits.

King speaks about writing as though he is a palaeontologist excavating the bones of a Tyrannosaurus skeleton. Writers are in a sort of “creative sleep” when they work, according to King. He imagines that the idea is all there before he begins the process. His job is to carefully and patiently expose the bones of the story.

King warns against artists who wait around for inspiration to strike. He says that the most important thing that you can do is to simply show up every day, and begin working:

Your job is to make sure the muse knows where you’re going to be every day from nine ’til noon. Or seven ’til three.

King says that if you adopt this habit of arriving at work every day, sooner or later your muse will know when to show up. 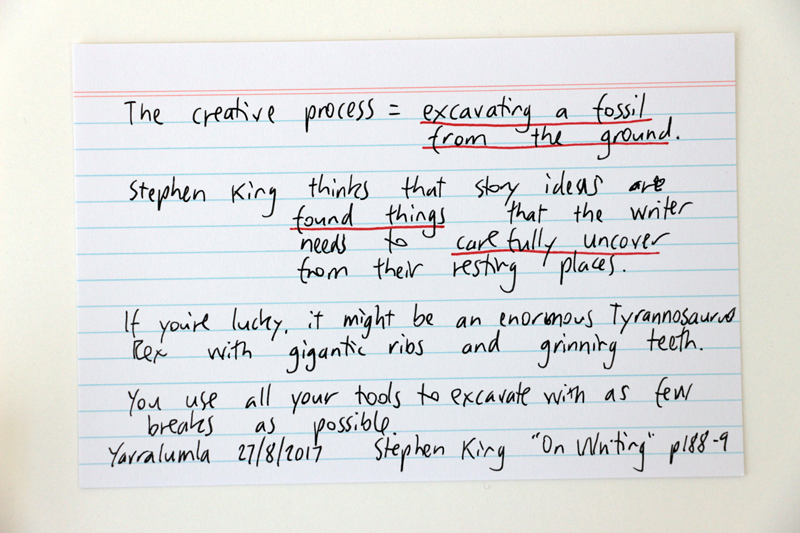 More information about On Writing: A Memoir of the Craft (2000) by Stephen King
Wikipedia | Goodreads | Buy new via The Book Depository (affiliate) 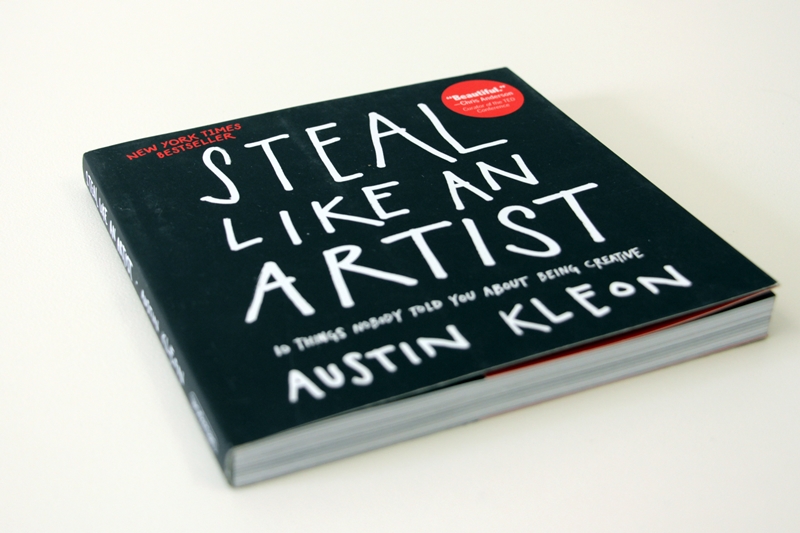 This is a short book that can easily be read in 20 or 30 minutes. I keep it on hand to dispense to any artistic friends who are feeling creatively uninspired.

Kleon urges us to “steal like an artist”: to unashamedly copy from the artists and heroes that we admire. Importantly, we must steal from multiple, diverse artists. Borrowing from so many artists at once means our output will not sound derivative. It will be transformed beyond recognition into something unique.

I appreciate the section entitled “Step Away from the Screen”, which features a photograph of Kleon’s studio. His studio is divided into a ‘digital’ half dominated by his computer, and an ‘analogue’ half dominated by pens, paper, scissors, and other tactile objects. Dividing your time between computer and non-computer tasks is a great way to reinvigorate your creativity.

I really recommend that you read Steal Like An Artist by Austin Kleon. 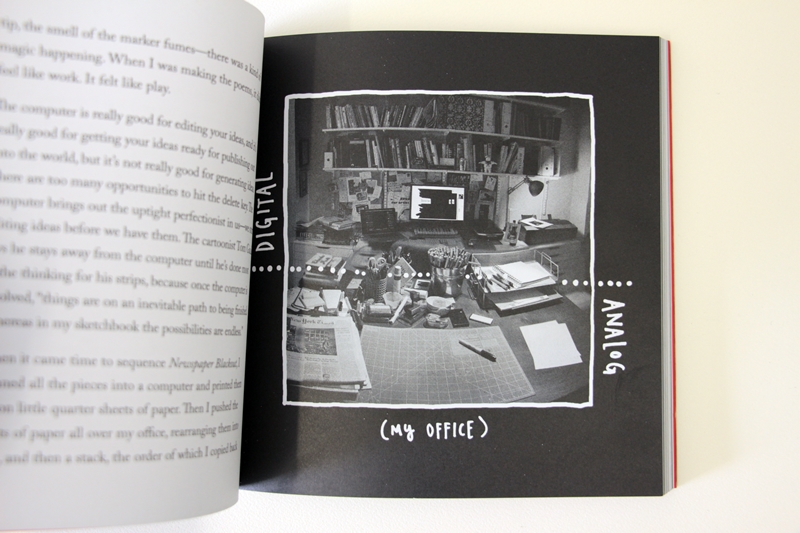 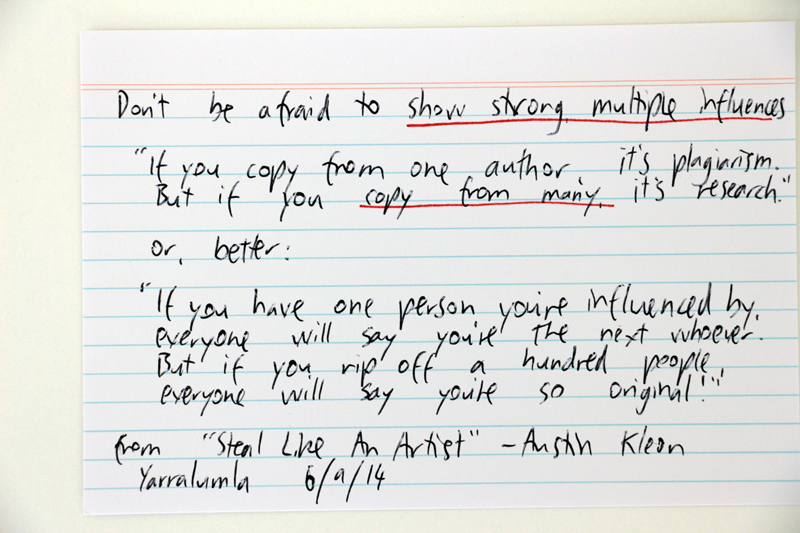 More information about Steal Like an Artist: 10 Things Nobody Told You About Being Creative (2002) by Austin Kleon
Wikipedia | Goodreads | Buy new via The Book Depository (affiliate) 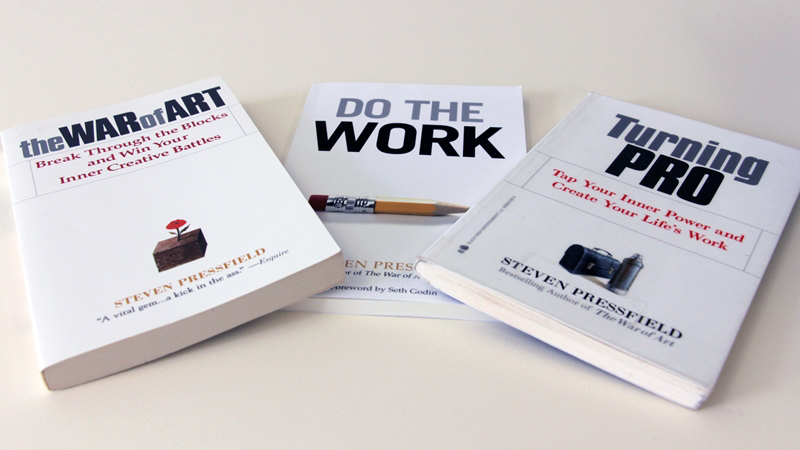 The War of Art, Do the Work, and Turning Pro by Steven Pressfield

A lot of people rate The War of Art (2002) by Steven Pressfield as their go-to motivational book.

In these books, Steven Pressfield describes the supernatural feeling of procrastination that stops us from working on the most important things that we should be doing. He calls this force “Resistance”.

In these books (and you might as well get all three, and read them in order), Steven provides the solution to conquering Resistance. The solution is “Turning Pro”, and the mindset that comes with this decision. His concise summary: “The amateur tweets. The pro works.”

Creative pursuits—be they art or entrepreneurial—are hard. Invest in these three books to fuel your creative fires. 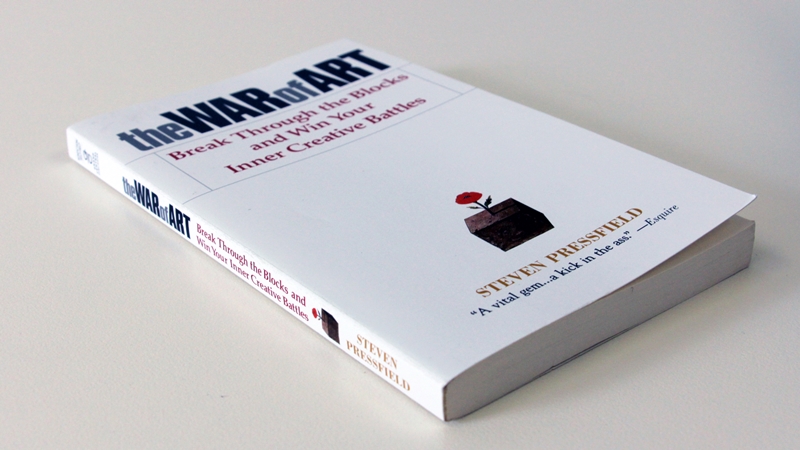 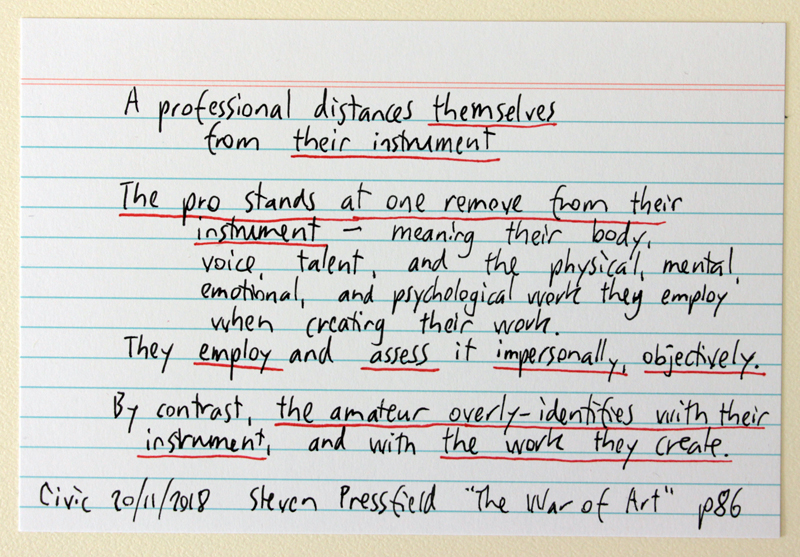 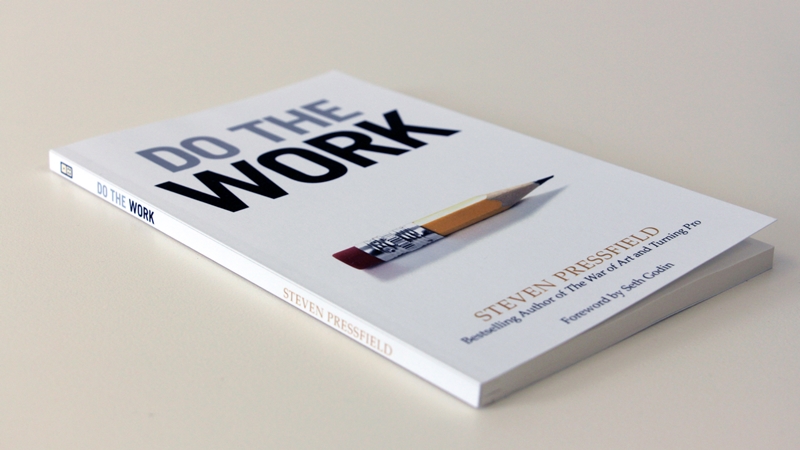 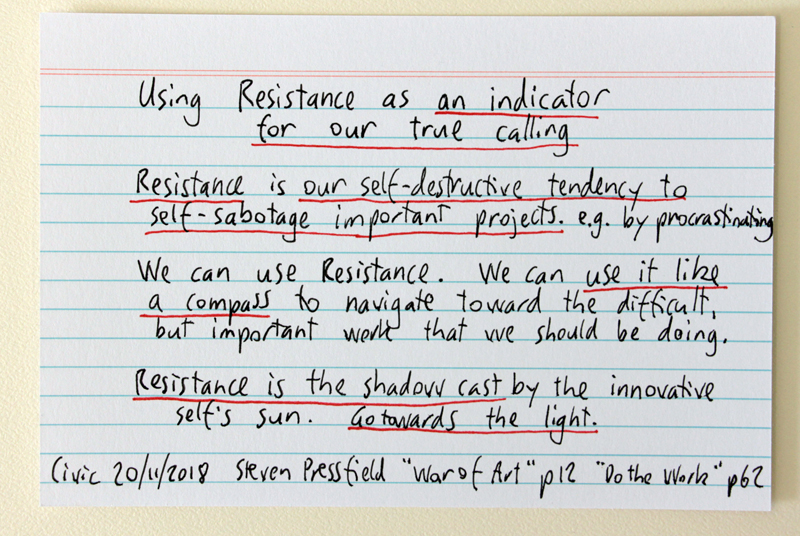 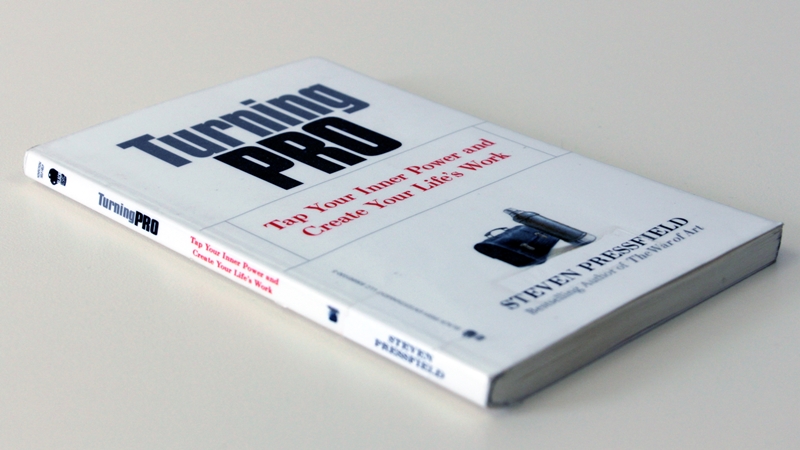 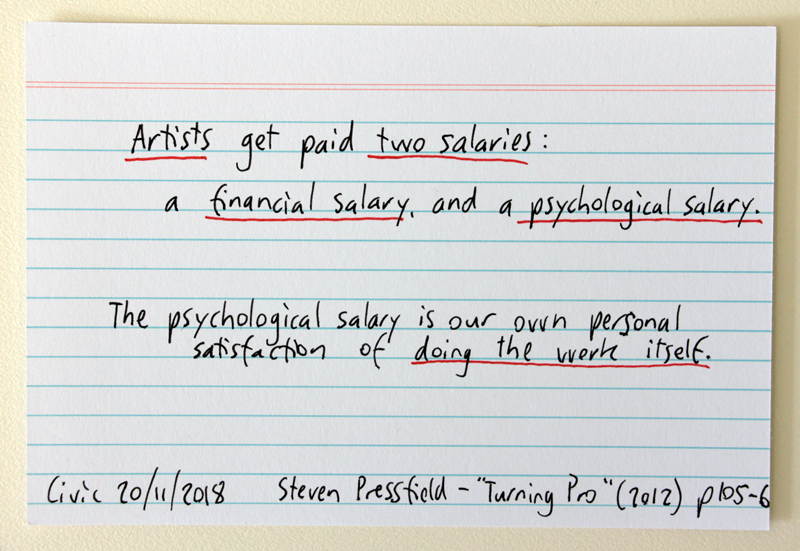 If you wanted to know more about those books, or to purchase them, I have included Wikipedia, Goodreads, and Book Depository links under each title. I receive referral commissions from any purchases you make from the Book Depository after clicking those links.

Want more book recommendations? I have another blog post titled Beyond distraction: books about workflow, concentration, and productivity which features books about the threats to our attention spans from procrastination and internet communication technology. 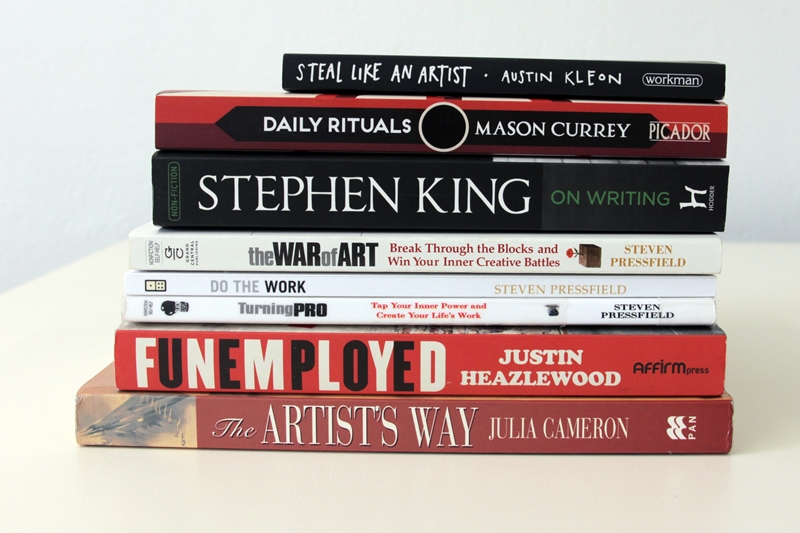 Beyond distraction: books about workflow, concentration, and productivity

I recommend books about the topic of productivity and working effectively as a knowledge worker. Books about building self-control and positive daily routines.