I’ve just released a new comic titled Who Owns the Million Dollar Baseball? With this blog post, I will further reflect on the Boston Red Sox ‘ballgate’ scandal that the comic profiles.

I am not a baseball fan, but enjoyed researching the history behind the Boston Red Sox and their beloved 100 year old stadium Fenway Park.

My thoughts on Doug Mientkiewicz

I hope my comic shows my fondness for the man at the centre of the scandal: Doug Mientkiewicz. Doug seems like a good-natured guy. All of the interviews I’ve seen of Doug make him seem like a down-to-earth man with a good sense of humour. It seems that the whole “scandal” ballooned into a big misunderstanding from some obviously tongue-in-cheek comments he made to a journalist. Unfortunately, the journalist took his comments out of context. After the initial story broke, the echo chamber of commentators amplified the story to absurd proportions. Doug retold the story on the Dan Patrick Show six years after the controversy:

Despite knowing how the ‘ballgate’ story was inflated beyond reality, I couldn’t resist retelling it in my comic. It simply is a fascinating anecdote, and I liked temporarily casting Mientkiewicz as the villain. 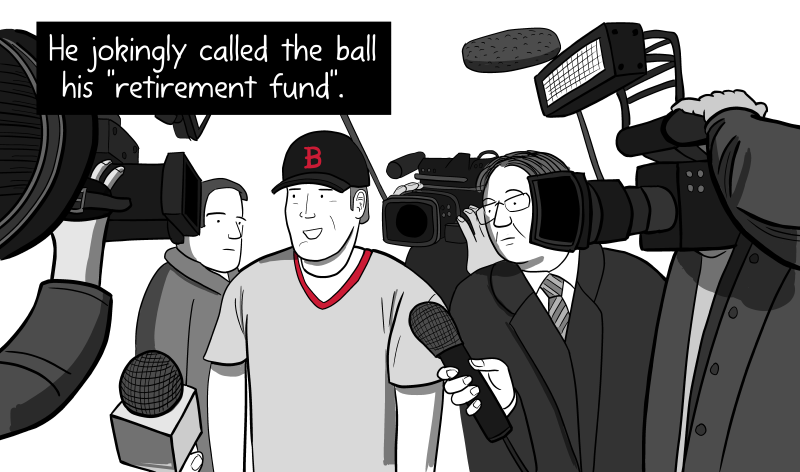 In retelling the story, I wanted to avoid further dragging Doug Mientkiewicz’s name through the mud. In my comic, I refer to him as “the first baseman” during the early part of my comic, describing the controversial elements of the story. I only refer to Doug by his name during that latter parts of the comic, when I describe his decision to donate the ball to the Baseball Hall of Fame. Hopefully this is a way to tell the story without overly tarnishing Doug’s name. 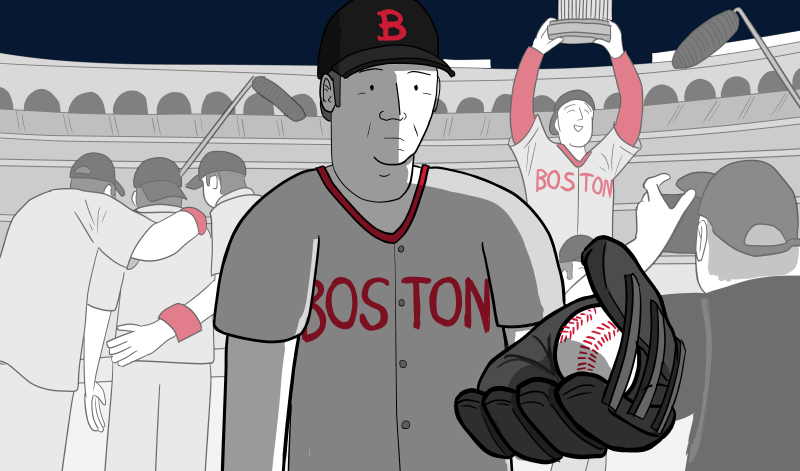 The final scene at the Baseball Hall of Fame

My comic ends with Doug Mientkiewicz’s 2006 decision to donate the baseball to the National Baseball Hall of Fame. 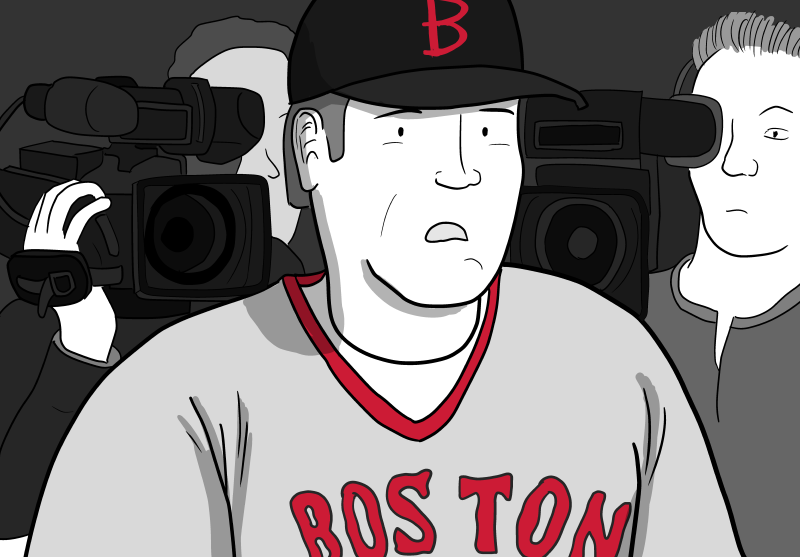 As far as I know, there never was any official ceremony to commemorate Doug’s donation of the ball. Nor did I find evidence that the ball was ever exhibited in a stand-alone display case in the Hall of Fame’s museum. But I decided to draw an imaginary ceremony into the final pages of my comic! 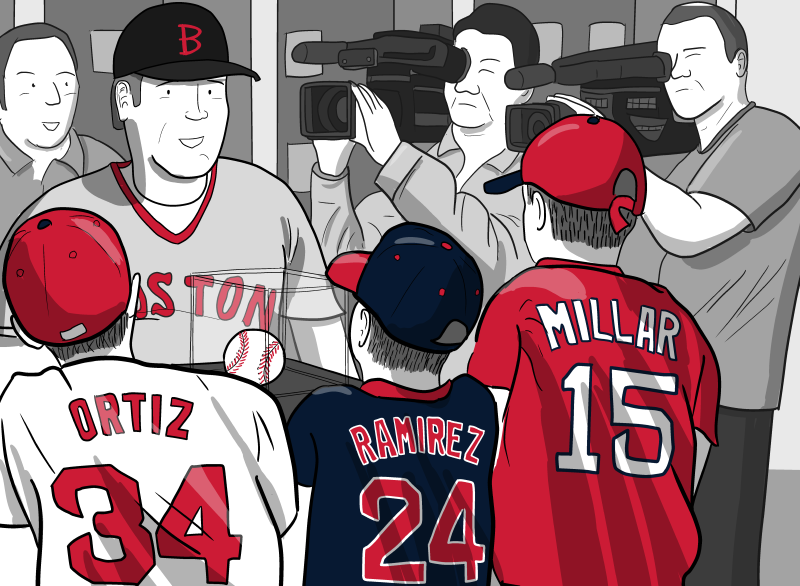 The penultimate image of my comic is Doug and the young fans looking into the ball in the display case. 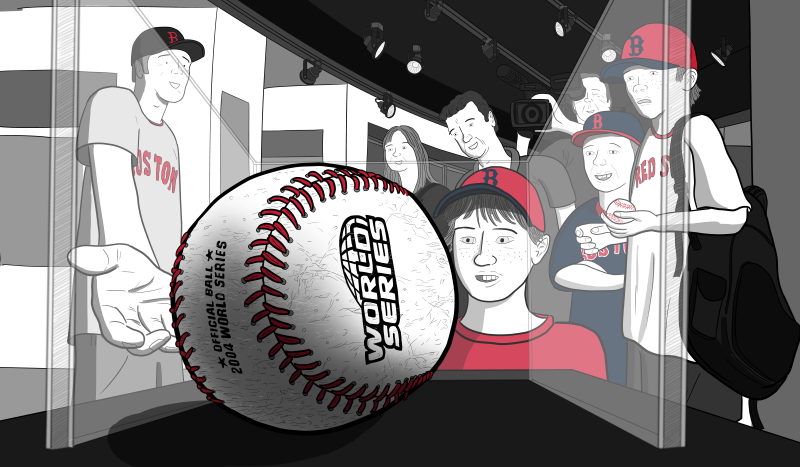 The final image of the comic is the baseball in the display case with a dutch angle twist. This is a closer crop of the previous scene. By blurring the foreground ball, I change the focus of the scene to emphasise the expressions on the boys’ faces. 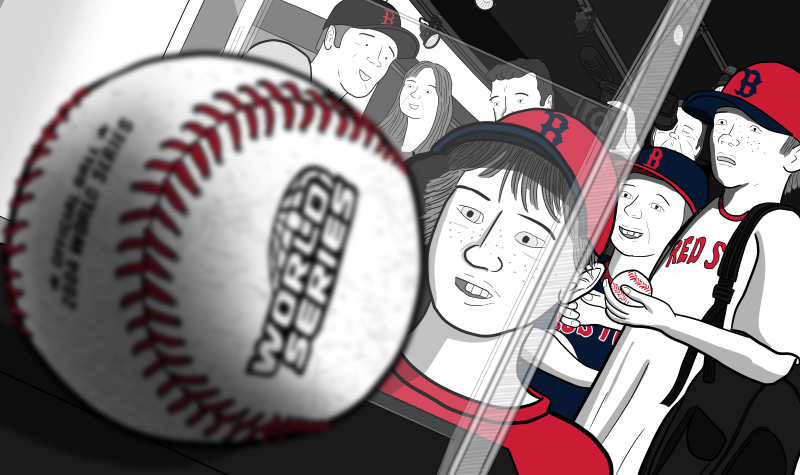 So far in this blog post, I’ve discussed the facts of the 2004 ‘ballgate’ scandal, and how I chose to depict them in my comic. In another blog post, I discuss the broader themes of Million Dollar Baseball. That blog post is titled Setting the foundation: the overlooked public factors of individual success. 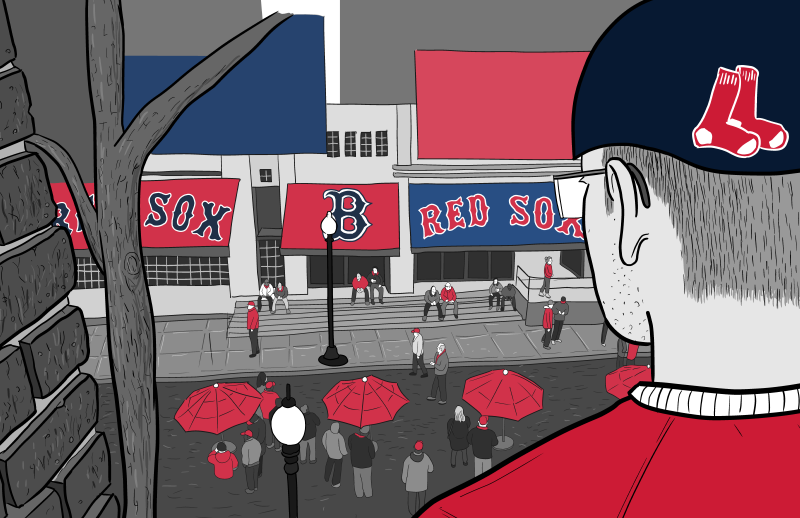 In Setting the foundation, I argue that the success of any one individual is hugely reliant on the smooth functioning of broader society. That the ‘brilliant’ Zuckerbergs, Gateses, and Musks would not be able to display their brilliance if it wasn’t for the numerous other people of society doing the myriad other tasks that their lifestyles rely on.

Read my full argument, and see more artwork from Million Dollar Baseball, in my blog post Setting the foundation: the overlooked public factors of individual success. 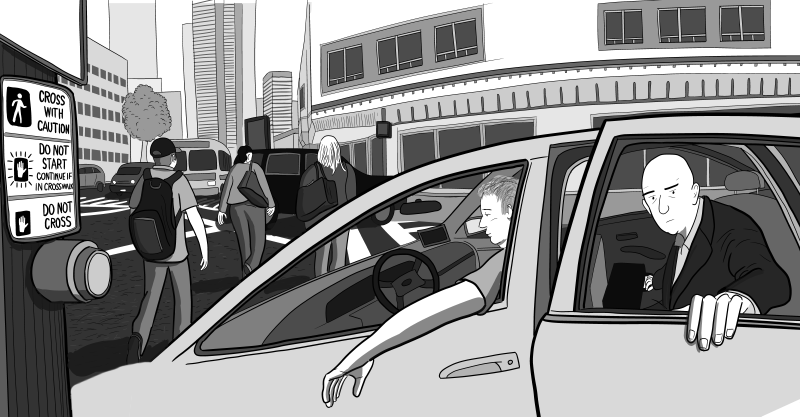 I reflect upon the storytelling approach used in my Rat Park comic. Cartoonists like me are creating little 'landing pads' for readers to understand unfamiliar issues. We create accessible ways for readers to absorb new information.