This is essay 4 from a 7-part series expanding the ideas from my comic Energy Slaves, about Buckminster Fuller’s insights into human energy consumption.

What happens after fossil fuels?

My comic Energy Slaves is a companion piece to my earlier comic Peak Oil, which reflects on the history and future of the petroleum industry.

The take-home message from Peak Oil is that no matter how much we may want to keep increasing our fossil fuel production, we are limited by geophysical factors. Unfortunately, we have already tapped the largest and easiest oil wells. We now face declining discoveries and, therefore, also declining production of oil.

Energy Slaves raises a related problem that complicates things even further: the falling net energy of society, in a world of fossil fuel decline.

Your eyes may glaze over as you read this bit. But stick with it – I try and explain things as clearly as possible, using short paragraphs.

So slap your face, wobble your cheeks, and when you are paying attention, I’ll explain net energy to you.

Net energy is also known as EROEI (energy returned on energy invested). It is expressed as a ratio, such as 100:1.

In the above example, at 100:1 if you sent one unit of energy to work, you would get one hundred units of energy in return. That is obviously a huge boon for a small energy investment. It is this huge ‘bang for buck’ ratio that allowed human civilisation to flourish during the 20th century. 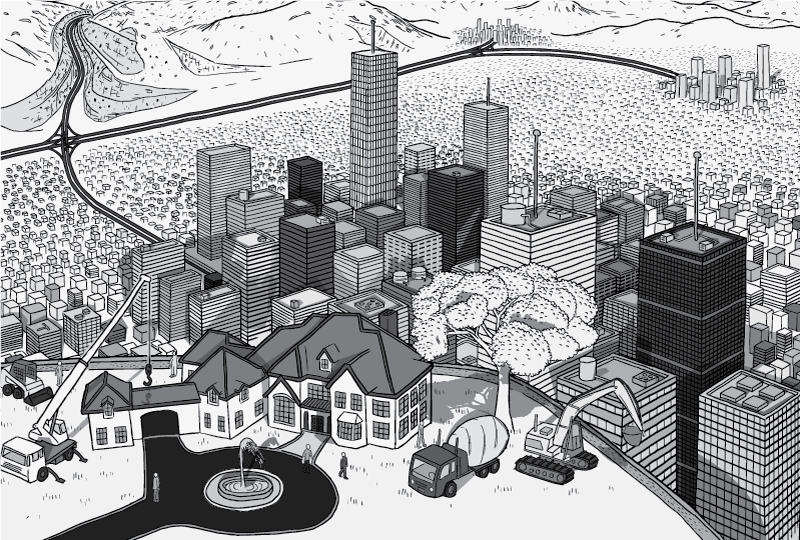 Scrutinising the ‘net energy’ (EROEI) of our energy sources is a worthwhile exercise. It forces us to ask the question “how many energy slaves do we get in return from each energy slave that we send to work?” This is an important question for us to consider as a civilisation.

The problem is that humanity has been facing a declining ‘net energy’ (EROEI) ratio since a heyday in the first half of the 20th century.

Yes, we are today accessing an all-time high quantity of energy slaves, but we are accessing energy sources that are declining in quality. 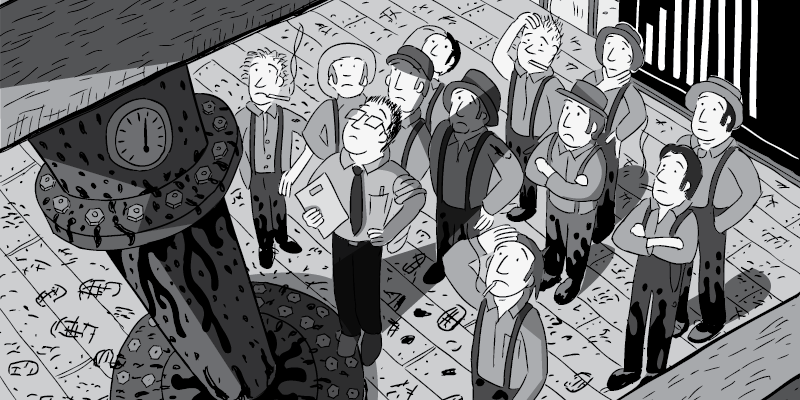 Why is that? In the next section, I give an analogy that hopefully explains things.

Imagine that you own an apple orchard, with a farmhouse in the centre of the land. One morning you wake up, and all of the fruit is suddenly ripe and ready to pick. It is time to go out and harvest the apples!

In this scenario, you will start harvesting by picking fruit from the apple trees closest to the house. You will choose the lowest-hanging fruit that is easy to pick while standing on the ground. You find yourself easily able to pick 300 apples every hour, and deliver them back to the farmhouse.

As time goes by, you have harvested all of the low-hanging fruit on the trees closest to the house. You find yourself walking out further and further to the apple trees that are distant from the house. Or you find yourself using a ladder to climb into the treetops to pick the high-hanging fruit in the trees close to the house. Your productivity drops, and you can only pick and deliver 200 apples per hour to the farmhouse.

Your productivity drops with time. The apple juice-makers within the farmhouse wonder what happened to the high rate of apples that they were used to receiving each hour. They have to downgrade their production rate accordingly.

As time goes by, more and more of your time is consumed by walking further outwards, or climbing higher. The days of 100 apples per hour are now behind you. For each unit of energy that you invest into picking fruit, you receive decreasing quantities of apples back at the farmhouse.

Note that the rate of production drops for each unit of input that is invested into the harvesting. Initially, the picker can harvest 300 apples per hour, but this soon drops to 200, and then beneath 100. Yes, it would be possible for the farmhouse to continue harvesting at a rate of 300 apples per hour. But they would have to send extra workers out of the farmhouse to join the harvesting effort. They would have to invest extra input resources to receive the same output.

This problem is akin to “running to stand still”. It is also known as known as the Red Queen problem, named after the character that Alice encounters in Lewis Carroll’s Through the Looking-Glass. During the Red Queen’s race, the Queen tells Alice “It takes all the running you can do, to keep in the same place”. 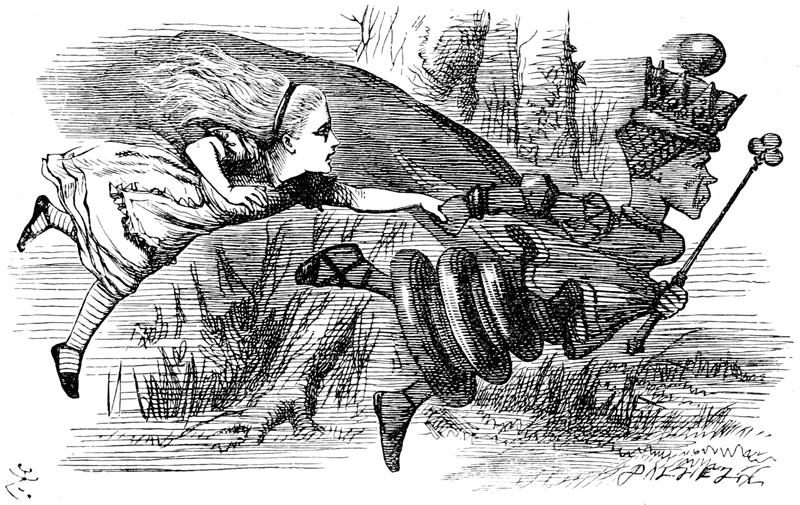 The apple orchard scenario is essentially what humanity faces, regarding net energy (EROEI). Yes, we are still drilling high volumes of petroleum every year. But, for every barrel of petroleum that we drill and extract, an increasing amount of energy must be invested into the drilling process. A greater percentage of our civilisation must be dedicated to merely gathering energy, rather than using energy.

Why is our ‘net energy’ ratio dropping?

The short answer is that, like the worker in the apple orchard, we have already drilled the “low hanging” oil wells that are closest to our civilisation’s “farmhouse”.

Compare the difference between the 21 metre-deep Drake Well in Pennsylvania, compared to the 5,500 metre-deep oil reserve beneath the Deepwater Horizon in the Gulf of Mexico. 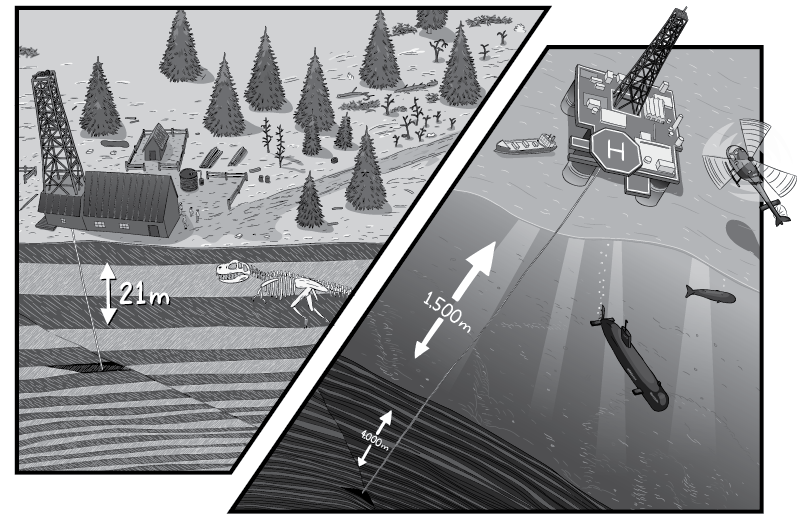 In the 20th century, we could access multiple untapped supergiant oil fields like the Ghawar Field in Saudi Arabia, that provided a ‘net energy’ ratio of 100:1. Today, we are often resorting to Tar Sands and Oil Shale for petroleum, which are sources with ‘net energy’ ratios beneath 6:1.

Essentially, for every unit of energy that we are investing into drilling for oil or digging up coal, we are getting a smaller return than we did in our 20th century heyday.

Using the energy slaves analogy, for every imaginary ‘worker’ that we are using to gather energy for us, the fewer energy slaves that they can harvest and bring back to the farmhouse. 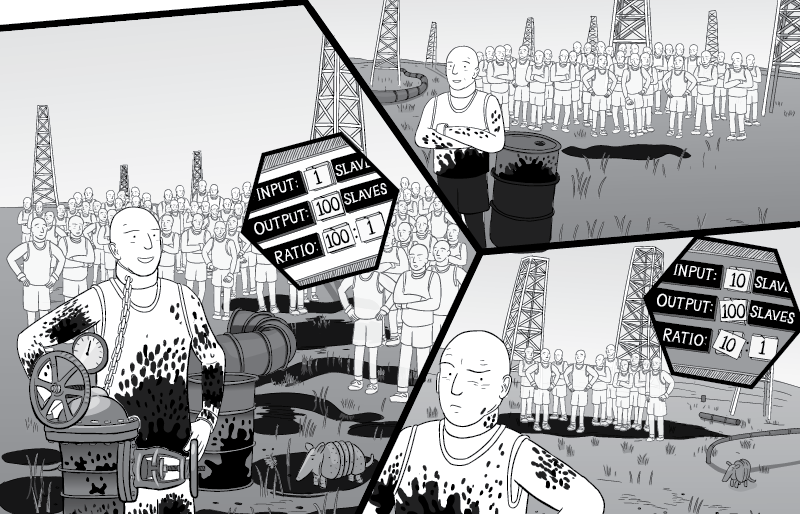 Searching for a miracle

The Post Carbon Institute released a publication called Searching for a Miracle: ‘Net Energy’ Limits & the Fate of Industrial Society (2009), edited by Richard Heinberg. It is an accessible and clearly-written report that is designed to be understood by the masses. The report evaluates the technologies that we have for powering human civilisation into the future. Unlike other reports that evaluate renewable energy technology based on $ value comparisons, this report emphasises ‘net energy’ as a key consideration.

It is sobering reading. Especially seeing nuclear energy—often touted for its immense potential of cheap power—being shown to have an EROEI ratio in the range of 5:1 to 15:1. This is lower than oil’s current 19:1 ratio. It is even lower than the roughly 18:1 ratio that wind power has (although wind’s EREOI ratio drops, when you factor in the backup energy needed to be installed to guard against non-windy days).

The take-home message from the report is that renewable energy can power a society in a post-fossil fuel world. But it may not be able to power our current society, its present energy-guzzling form. We will need to tighten our belts, and focus on efficiency as we wean ourselves from fossil fuels.

A quote from page 76 of the report echoes the cautious tone of my Peak Oil and Energy Slaves comics:

We must begin to appreciate that the 20th century’s highly indulgent, over-consumptive economic patterns were a one-time-only proposition, and cannot be maintained.

It is easy to make broad, optimistic claims about humanity’s ability to solve all problems with technology. The energy industry has been doing this for decades.

It is hard to actually crunch the numbers, and understand the specific constraints that we will need to live within.

Sometimes we need to do the job that is harder, but more insightful.