Purpose reflections: the ‘making of’

Purpose reflections: the ‘making of’

Part 1 of Purpose portrays an ‘explorer’ character engaged in a struggle against the natural world. Over the course of the comic, more and more of the surroundings are cleared of nature until the final panel reveals a world almost fully occupied by people.

Part 2 of Purpose begins with the same character looking upon a grim, desolate planet. A narrative unfolds which is the mirror image of Part 1, showing the character taking steps to return the land back to full prosperity.

The follow-up comic to St Matthew Island, Purpose revisits the theme of environmental sustainability, but focuses on the attitudes behind our actions.

The epicentre of inspiration behind Purpose was reading Ishmael (new / used aff) by Daniel Quinn. Released in 1992, the novel was widely hailed as a touchstone for readers seeking to make sense of our civilisation’s attitudes and values. Written in a quasi-fictional setting, almost the entire book consists of a dialogue between an unnamed student and a teacher named Ishmael.

I came to the party in 2011, and ended up rating Ishmael as my favourite read of the year. Quinn’s unique novel cuts to the heart of Western civilisation’s struggle against nature: a wrestle which Quinn pins to a set of deep-held beliefs unique to our culture. Ishmael has its critics, but the book connected many dots for me, and left me wondering how to move forward as a person. 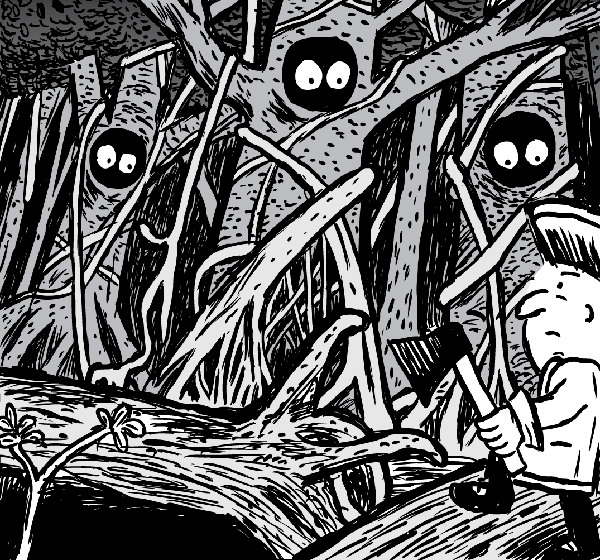 So what do you do when you discover your whole culture is built on quicksand?

I wrote. I tried unpicking the unspoken attitudes of our culture, and spelling them out in terms as stark and concise as possible.

I extrapolated. I stretched the attitudes to absurd proportions. An obsessive mentality eager to control every plant that grows on Earth, every animal that stands on Earth. The ultimate goal? Turning chaos into order. Turning nature into food. Turning food into people. 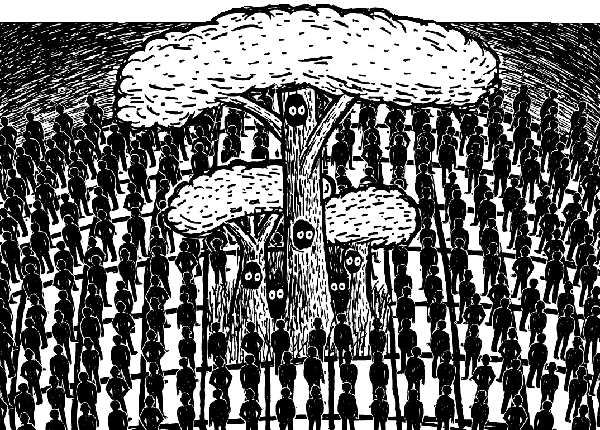 That is our purpose

“Turning nature into people. That is our purpose.”

Written out in such simple terms it sounds ludicrous. A caricature. A greenie straw-man.

But do our actions point to a different story?

In my country, Australia, there is a strong voice of dissent against any plans to surrender “our” resources to nature. Ending broad-scale tree clearing? Flushing extra water down the Murray River? Creating a marine reserve in the Coral Sea?

Out of the question.

The dominant mentality hates the idea of losing control. Of ceding defeat. Of ending ‘progress’. Of acknowledging flaws in the strategy that took us to here.

Why should we let nature waste our resources? Why should we care about the arrows on the food chain which don’t terminate at humans? We own this joint, and that’s the way it’s supposed to be.

Owners of the planet

The dominant mentality comes piped directly from the scriptures: humans are the ‘owners’ of this planet, and it is our job to liberate it from the chaos of the wild.

It’s an all-pervading mindset, passed down through our culture and accepted even by those who do not consider themselves religious or creationists. Something in our subconscious still harks back to the time when we thought the world was made for man, and man was made to rule the world.

We use language like “our fisheries” and “our wildlife” to describe the parts of nature placed here for our exclusive use. We talk of “our oceans” and “our solar system” to describe our surroundings, brought into creation so that we could have a home. Everything in the world, everything in the universe remains framed around human beings.

Purpose, part 1 remains the starkest piece I have published. Even too strong for some, who saw it as a slap in the face to the average reader.

Although the protagonist of the comic wears ‘explorer’ clothes, I maintain that our modern society is following the same strategy as the settlers that came before us. Outwards the suburbs march. Inwards the forests shrink.

The average reader may not agree with the mission of the protagonist, but is nevertheless an accomplice through the machinery of globalised capitalism. Someone, somewhere is cutting into the natural world to create the goods associated with our modern lifestyles. Even if we may not chop down the trees with our two hands, we inadvertently vote for their destruction with our purchases.

By the end of Part 1, the reader has long since stopped being a willing participant with the protagonist’s mission, yet sees the logical conclusion of our civilisation’s mindset.

Unlike the explorer character, who relishes in the suppression of nature, the average reader sees this destruction as a sad sin of omission, rather than a sin of commission.

It’s not enough to point to the error of our ways. There must be an alternative to turn to. As Daniel Quinn notes in Ishmael, “you can’t just stop being in a story, you have to have another story to be in.”

So if our ‘purpose’ is what brought us here, what should we now live for? Being an optimist, I was not satisfied publishing Part 1 without an antidote. Part 2 at least tries to imagine the motivation which could lead us out of the self-created valley, back to a summit of natural abundance.

All too-often we try to be ‘less bad’ to the environment. Or environmentally benign. To me, those goals do not go far enough. Instead, we need to be restorative.

I believe our motivation must be found in the restoration itself. Seeing the improvements. Helping nature recharge itself. Watching the planetary systems return to full glory.

Unsurprisingly, I found that the answer came from reversing the mindset of the Part 1 explorer. From obsessively suppressing nature, to finding joy with the chaos of nature. From recognising that man belongs to the world, rather than the world belongs to man. 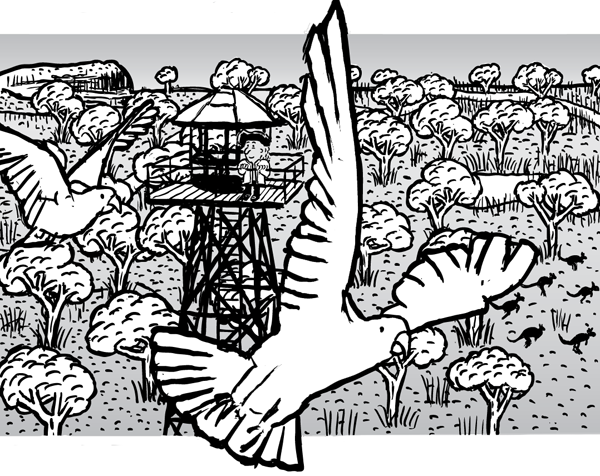 With Purpose originally inspired by Ishmael (new / used aff), it was great to get a compliment back from Daniel Quinn. As well as sharing the comic with his website followers, Daniel congratulated me for packing “a lot of valuable messages into just a handful of drawings”.