As I mentioned recently, I have a recurring monthly crowdfunding campaign via Patreon.com.

This is a quick update: I have delivered on the first 2 rewards for my subscribers of the campaign

I sent postcard #1 in July. Only 46 limited edition, hand-numbered postcards were sent. The artwork is the page 20-21 double-page spread from my comic Peak Oil.

Here is a look: 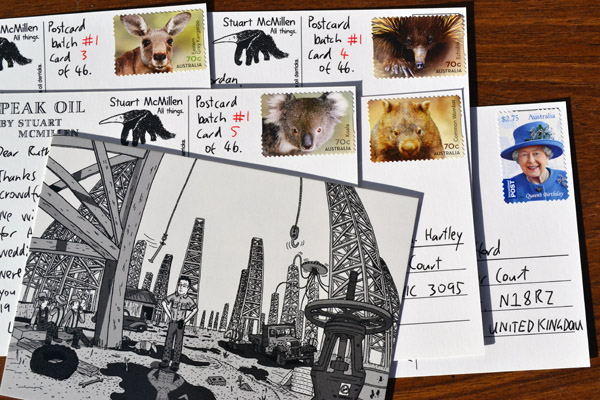 As you can see the Australian recipients were treated to four lovely stamps, featuring Australian wildlife.

Unfortunately, international recipients received a stamp with a human being on it. I feel so very embarrassed that Australia Post feels like Royal Family stamps are the best way to represent Australia to overseas mail recipients in the 21st century…

At the same time that I was recording the promo video that appears at the end of my Buckminster Fuller’s Chilling Domes comic, I also shot my first ever video Q&A.

I had previously invited my Patreon supporters to send my questions about me or my comics that they wanted answered. I chose the 10 best questions, and filmed my responses in July 2015. The video was shot on the picturesque Kurilpa Bridge in Brisbane, which is near the Gallery of Modern Art. The Kurilpa Bridge was constructed partly using Buckminster Fuller’s tensegrity engineering princples, so it was a relevant place to shoot my first video Q&A. Throughout the shoot, I moved around, highlighting different views of the bridge. 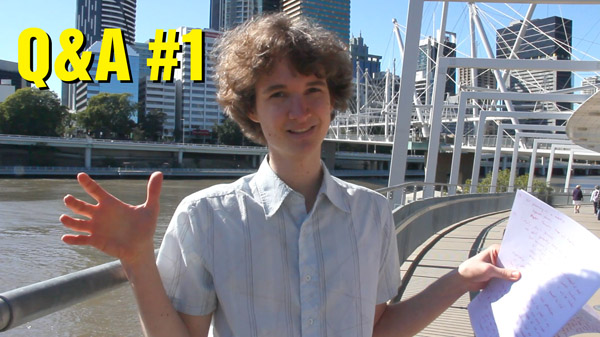 The entire video Q&A lasts 48 minutes, and I tried to answer the questions as fully as I could.

The only way that you can see this video Q&A is by becoming my crowdfunding supporter via Patreon.com.

A call for new Patreon supporters

Researching and drawing my comics is my full-time job!

If you value my comics, and fancy the idea of receiving a hand-written postcard, or participating in my video Q&As, please become my supporter via Patreon.com.

My comics attract only a small, and idiosyncratic readership. So please put your money where your tastes are! Keep me drawing. Keep me publishing.