Today I posted my latest cartoon ‘Part of Nature‘. It is the product of 5-6 weeks of drawing (after work and on weekends), and I feel it it my best strip to date. Graphically and, I hope, thematically it is miles ahead of the work I was doing at the start of the year.

I’m trying harder to set a sustained tone with my strips. ‘Amusing Ourselves to Death‘ gave me a peek at what can be achieved, but I can envision something far greater than that cartoon. Barely four months after that cartoon was completed (and spread virally across the internet to a wide audience), I am looking forward to a rich future perfecting my craft and improving strip by strip.

I am getting better at editing myself. I have already shared one panel that was cut from the latest cartoon. Here is an example of another segment that was not included in the final version: 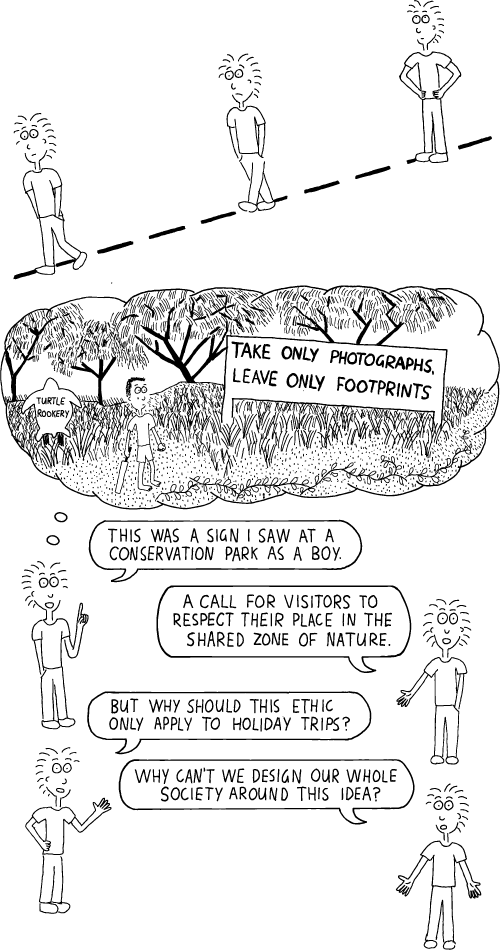 When I went to bed last night the panels were still in the cartoon, and the entire piece was entitled ‘Take Only Photographs, Leave Only Footprints’. After sleeping on it, I awoke to delete the panels and rename the piece ‘Part of Nature’. I’m really glad I cut them, as I was probably only hanging onto them for so long because of the Mon Repos reference of my childhood.

The panels were to be a bridge between the ‘depressing’ first-half (about environmental destruction) and the ‘positive’ panels of the second half. Good in theory, but the panels really killed the tone established by the stark graphics of the first seven panels. I’m really glad I cut them.

I think the cartoon ‘me’ that I have included in past strips may not have much future with the new direction that I am planning on taking my drawings. In August I spent 2-3 weeks drawing a strip that will never see the light of day. The cartoon ‘me’ was featured heavily, and after the artistic style of ‘Amusing Ourselves to Death’ and ‘I Like Music‘, it seemed like a step towards the past, not the future.

I am slightly embarrassed by the primitive artistic style of my early cartoons, but am happy to keep them on the internet to document my progress. I look forward to the day when I can look back on my current drawings and fret at their crudeness!

Great post however , I was wanting to know if you could write a litte more on this subject?I'd be very grateful if you could elaborate a little bit further. Cheers!