This article is about the budget for my campaign to become Australia’s first comics artist earning the median Australian income from crowdfunding.

This post is mostly for those who have come here from my Patreon crowdfunding page, and are curious about how I determined my budget. I will keep things to-the-point, and about the logic behind the numbers.

Rather than aiming for the average income, I decided to aim for the median income as my goal. Why?

‘Average income’ statistics are typically higher than ‘median income’ statistics, because they are inflated by the astronomical incomes of the super-wealthy. Because of this, statisticians tend to prefer talking about median incomes, rather than average incomes, because it is more representative of the real incomes that are actually earned by people in the population. By definition, the median income represents the actual dollar income that was earned by the actual person in the middle of the country’s income spectrum.

Since I live and work in Australia, I will use Australian statistics as the basis of my goals.

What is the median Australian income, anyway?

So, the next question becomes “what is the median Australian income?”

To learn the answer, I turned to the Australian Bureau of Statistics. Their relevant report is Employee Earnings and Hours published in May 2016, based on an ABS survey. (Another report is due later this year, in 2018.) Based on this 2016 survey:

These are both pre-tax incomes, excluding superannuation.

(Yes, these statistics only include the incomes of employed people. It does not count those who are living on benefit payments, such as the age pension, disability pension, or unemployment benefits. If they were included, these ‘median income’ figures would be much lower.)

Knowing that I wanted to personally earn the median income of $72,591 p.a., I begun to understand the amount that I would need to earn as a small business to be able to afford to take home this income.

In other words, I knew that there were other small business costs that I needed to understand, and stack on top of my desired personal income.

(This is something that most waged employees don’t fully appreciate. They fixate on the dollar amount that their company pays them, without understanding that their total cost of employment is often an extra 40% or so above this nominal amount. These on costs include things like their employer paying for their office, utilities, employee training, superannuation, and similar hidden expenses). 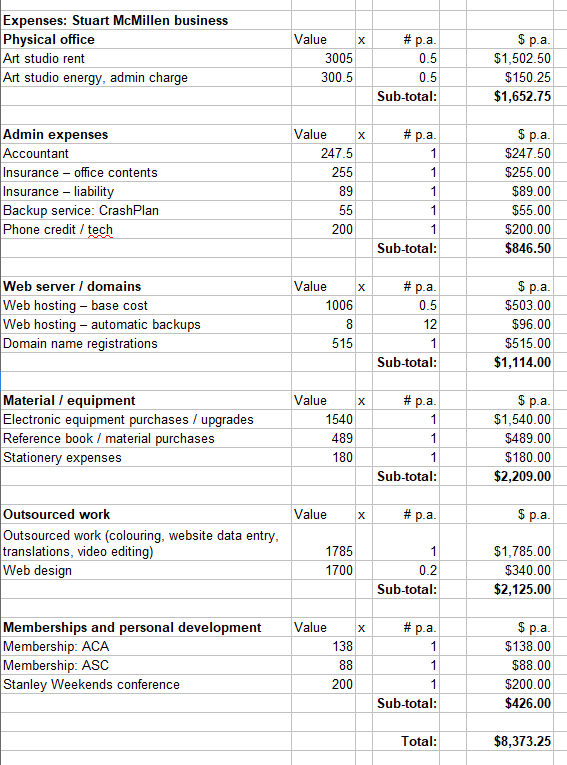 The table above lists my fixed expenses as a small business. It is divided fairly evenly between items like my physical office expenses, paying for my web server expenses, technology upgrades, as well as the cost of hiring people to do work like web design and video editing. It is a slim budget, but I’ve also included some personal development items, such as attending the Australian Cartoonists Association’s Stanley Awards and member conference.

The sum total of these fixed business expenses is a conservative $8.373.25 per annum.

Then we look at variable expenses.

My budgeting shows that I have a (COGS) (Cost Of Goods Sold) of 25% that I need to factor into calculations. This COGS represents the variable expenses that subtract from each dollar that I earn. It includes the cost of fulfilling all of the crowdfunding rewards to my Patreon supporters (i.e. video editing costs, printing costs, postage costs). This represents an extra 25% that I need to earn.

On top of this is the 9.5% superannuation that I would otherwise be earning as an employee, as well as the costs of transacting through my crowdfunding platform Patreon.

Above is the total Australian dollar and US dollar amounts that I need to earn as a small business, in order for me to personally earn the median Australian income.

I have converted at an exchange rate of 1 AUD = 0.78843 USD, which is a mid-range assumption. I use US dollars, because that is the currency that my crowdfunding platform Patreon uses, and also because it is a common currency that is more familiar to international supporters than Australian dollars.

Therefore, my monthly crowdfunding goal is US$7,425. You can see how I am currently tracking toward this monthly goal at any time, by visiting my crowdfunding page, and looking at the left-hand goals section.

That is enough for one blog post, explaining the logic behind my Patreon goals, and sharing my budget.

Finally, if you value my work as a thought-provoking comics artist, please support my crowdfunding campaign. Pledge a monthly gift via crowdfundstu.com.

Right now, I have an exciting fundraising opportunity: a government-backed matched crowdfunding drive. Any pledges made to my Patreon crowdfunding page before 31 May 2018 will be multiplied by 12 by Creative Partnerships Australia.

In August 2017, I joined a group of ten comedy novices for a National Science Week experiment. After a month of coaching, we each performed a 5-minute comedy set based on our personal convictions.