Thin Air describes the 17th century experiments of Jean Baptista van Helmont, who wondered what exactly trees were made from. The counter-intuitive answer is that trees build themselves almost entirely from carbon, oxygen, hydrogen and nitrogen: the same elements which breeze past them in the air. The comic goes on to compare the construction techniques of nature with those of human industry, and wonders if industry will ever learn to use building techniques like nature.

A major aim of Thin Air was to make readers appreciate the elegance and brilliance of a familiar, yet overlooked neighbour: the humble tree. 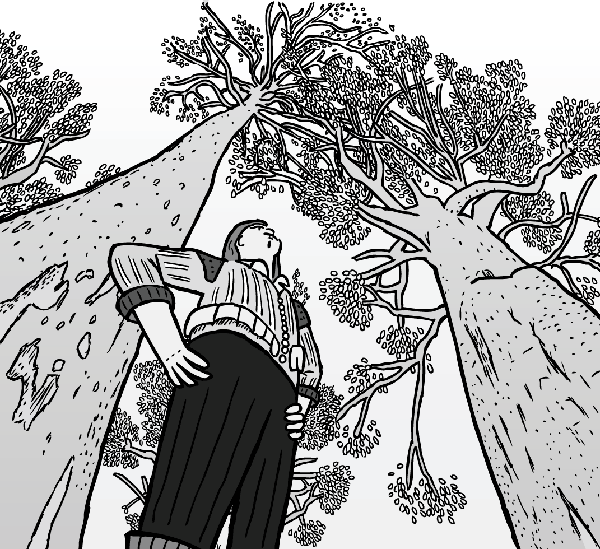 To the enlightened person, trees are no longer just ‘things’ that fill the space between the important, man-made structures of the world. They are incredible in themselves!

Trees are solar powered ‘machines’ that use sunlight into turn water and carbon dioxide into sugar and oxygen. They are living symbols of defiance that fight gravity and tower above the earth with bodies made from solidified air.

Of course, by extension, we are mostly made from thin air too. Despite trace elements (such as the calcium of our bones, or the iron of our blood), we too are mostly made from the same stuff that we are swimming in. Essentially, the main thing separating our bodies from the free-floating gases of the atmosphere is fancy jigsawing.

Once hidden before my eyes, I am now drawn to the sight of trees wherever I look. I marvel at the defiant way they erupt from the ground, pushing towards the sky. I rave over the precarious way they hold their mass above our heads. What I once ignored now forms a focal point of the way I appreciate the world around me. 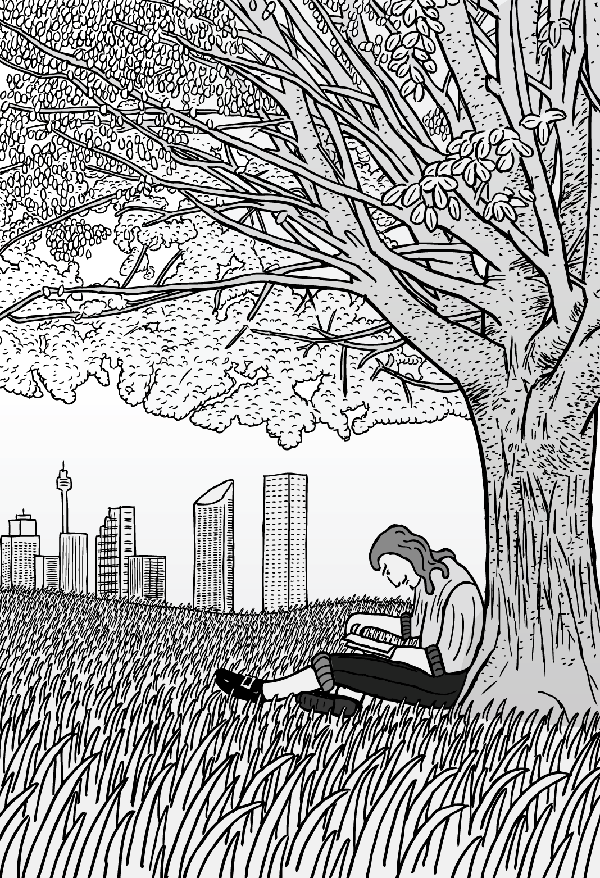 Thin Air is spun from a train of thought that followed one of my many re-reads of Biomimicry (1997) by Janine Benyus (new / used aff). In beautifully-written prose, Benyus presents a laundry list of amazing technologies ‘invented’ by nature which surpass human achievements. Leaves more efficient than solar panels, mussel glue stronger than human adhesives, rhinoceros horns which self-heal. Nature, it seems, has remarkable secrets to teach us.

Thin Air is partially a love letter to biomimicry, but it is also a cannon aimed at my once-sacred cow. 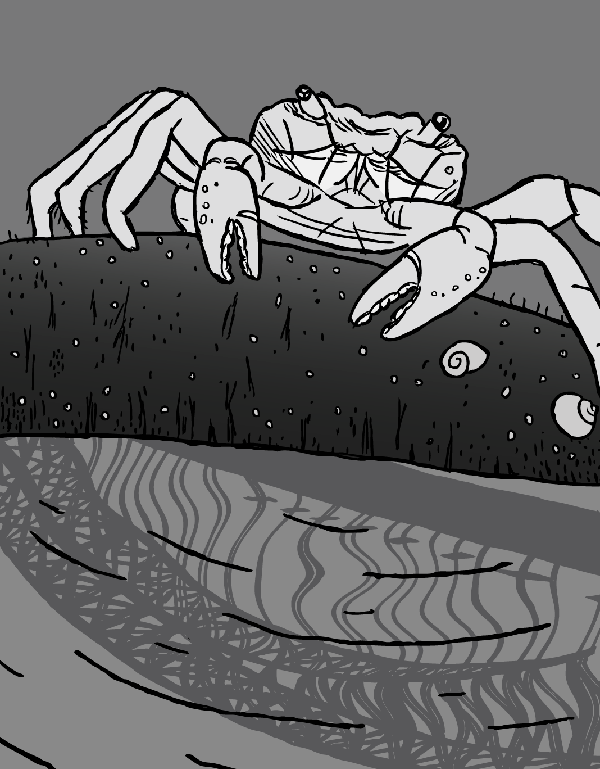 It’s easy to get carried away with biomimicry and ignore the amazing technologies, amazing achievements of humanity. Yes, we should respect and learn from nature, but there are limits. We should beware the New Age “nature = good, technology = bad” mentality which pervades so much of the green movement.

My dose of reality into the limits of biomimicry came from reading Steven Vogel’s 2003 textbook Comparative Biomechanics: Life’s Physical World. After 500 pages of comparing nature against engineering and physics benchmarks, Vogel writes:

“Biomimetics has built, quite unnecessarily, in my opinion, on some counterfactual mythology (= bull). … Artists and antitechnologists disdainfully disparage any claim of true novelty in the artefacts of human industry. But knee-jerk naturalism does not withstand scrutiny.
…
[N]ature neither holds, nor should be expected to hold any natural superiority, and she provides neither comfort nor example to engineer-bashers. Our technology does all kinds of things with few or no natural analoges.” (Vogel, 2003, p 511, 516)

His conclusion is similar to that of the Thin Air comic: we have much to learn from the wonders of nature, but we shouldn’t fall into the trap of thinking that nature trumps human ingenuity on all fronts.

Now retired from teaching at Duke University, Steven Vogel proved to be a helpful sounding board for early drafts of the Thin Air script. 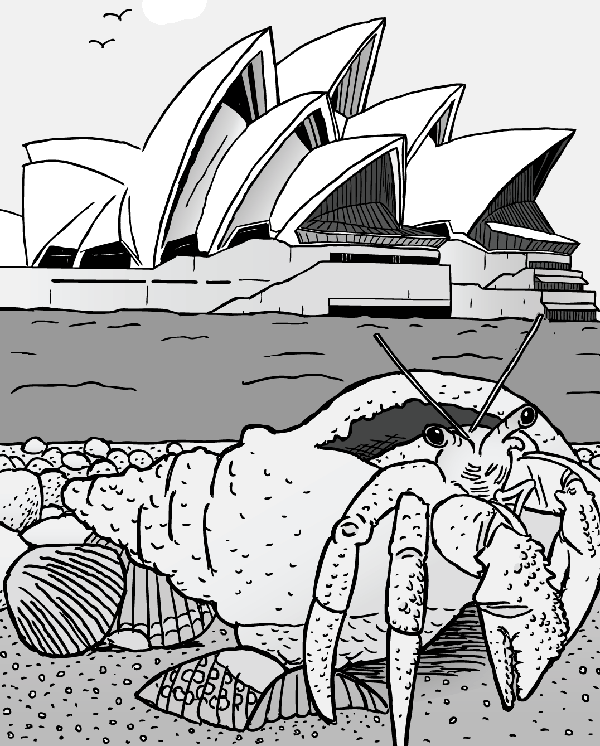 With Thin Air, I tried to capture the contrast between the natural and constructed parts of our world. I quickly decided that Sydney would serve as the backdrop for a city containing wonders of natural and human engineering. Basing the comic in Australia gave me a good excuse to draw my favourite type of trees: eucalyptus.

Although the novelty of drawing tree leaves quickly wore off (I spent 170 hours on line art alone), the final graphics are distinctive and striking. Thin Air included my first use of double-page spreads as a way to highlight expansive ideas within the comic. Who knows where this crazy experimentation will end….I might even start adding colour! 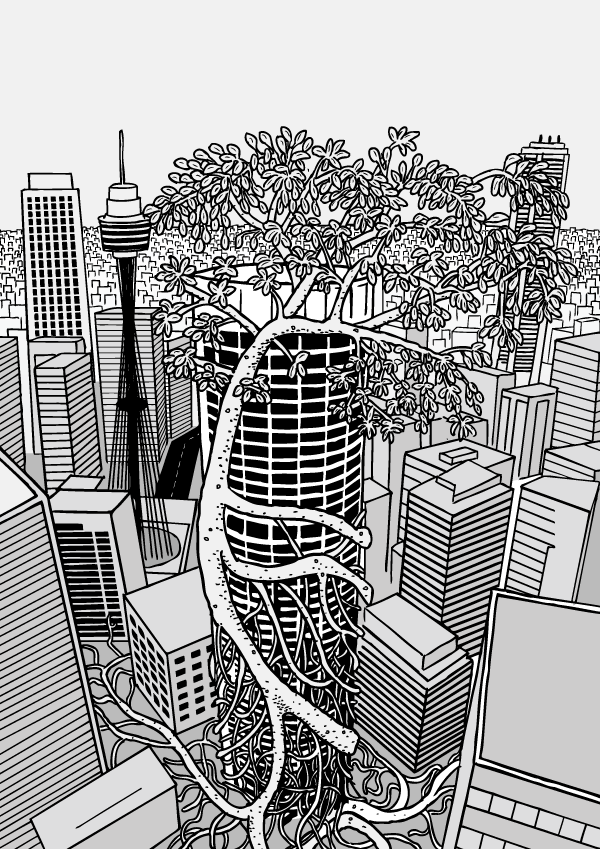 Originally the cover image of Thin Air was that of a strangler fig climbing a Sydney office tower (see above). It looked nice, but didn’t sensibly link with the comic. After a long period of brainstorming, I hit upon an idea to combine van Helmont, the city of Sydney and trees all in the one frame. The final cover artwork satisfies me immensely.

Thin Air uses the experiments of Jean Baptista van Helmont as a gateway for explaining the elemental make-up of trees. Despite his starring role in the comic, I would like to make one thing clear:

Van Helmont was not a good scientist.

Riddled with holes of logic, van Helmont’s willow experiment embodied many of the qualities associated with junk science. Hershey (2003) points out a comprehensive list of his errors, including: 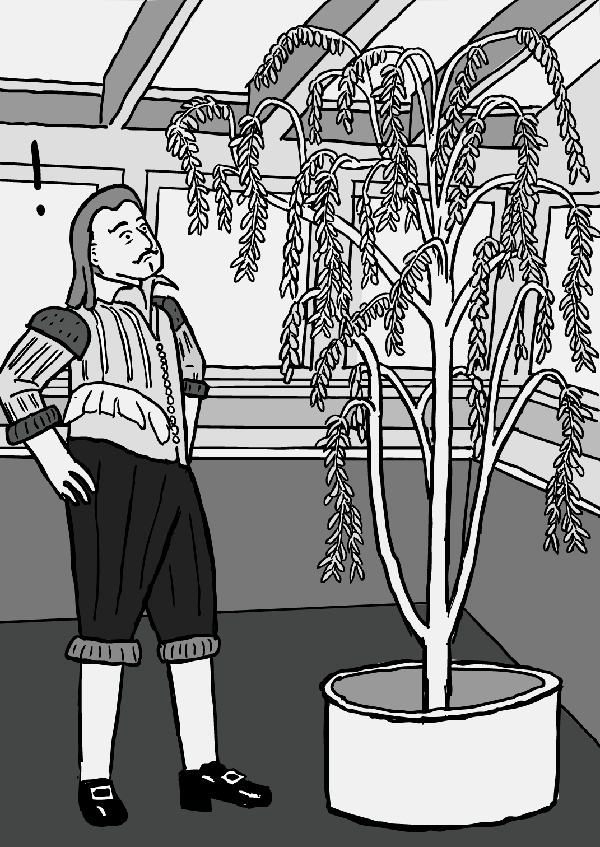 The image of van Helmont examining his willow tree serves as a great poster for science, but the real van Helmont was both hero and fool. For this reason, as a Faustian bargain for his starring role in Thin Air, I have portrayed van Helmont as permanently dressed in foppish clothes. Take that!

Like its sister comic, Type III, Thin Air ends without a specific ‘message’ or conclusion. The simple reason for this is because I do not quite know the implications of the comic.

I am not an engineer or a physicist, and am unsure how far we can push nanoengineering. Similarly, I am unsure of the limits to which we should heed when constructing with the very same carbon which is needed by organic life. 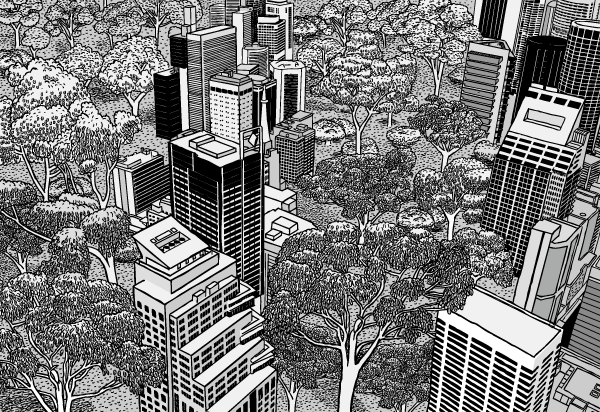 As a minimum, Thin Air offers readers a fresh perspective to appreciate the ways of nature. At best, the comic could point to a new direction for human civilisation. One with less need to turn the Earth upside-down and mine the crust for resources. One which builds artefacts from life-friendly materials in a life-friendly way, inspired by nature.

Only time will tell how we move from here.

This is fantastic. I teach biomimcry as part of my work. You make an excellent point about technology and nature being uneasy bed-fellows for some people. It is more that we need to look towards nature for the operating principles rather than the exact instructions. To anyone who suggests technology is 'bad' I suggest they don't bother visiting the dentist next time they need a filling. Keep up the fantastic work.