This is the second in a two-part series about my favourite books from the last two years. Blankets by Craig Thompson is the other post in the series. 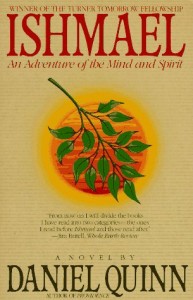 Although I have read books on environmentalism for many years, I was still blown away when reading Daniel Quinn’s Ishmael for the first time in 2011.

Ishmael is a book which impressed me both because of its actual message, as well as the way in which the author reveals his ideas to the reader. Most books on sustainability present ideas in a straight-forward, non-fiction way. The arguments may be supported and heightened with poetic prose (e.g. Natural Capitalism, Cradle to Cradle and Biomimicry), but they are quite direct and structured in making their arguments.

Quinn takes a different approach with Ishmael. The book is presented in a quasi-fictional setting, with almost the entire book consisting of a dialogue between a teacher and a student. Instead of presenting the ‘answer’ to the student right away, the teacher helps the student deconstruct his existing worldview. Once this is complete, an alternative perspective is constructed throughout the course of their conversations.

By writing the book in this way, Quinn gives the reader a heightened sense of involvement. The reader is invested in the character of the student, and therefore also invested in learning from the teacher. On one hand, this is both frustrating when the answers don’t come easily. But at the same time, it makes for a page-turning book because of the way the answers are pieced together through their discussion. Because of the gradual way things are revealed, information which may have seemed ho-hum in a regular textbook seem almost revelatory in Ishmael.

Ishmael (and the Daniel Quinn books that followed it, such as The Story of B, and Beyond Civilization) have their critics. But to my mind, they are mostly from people who bring their own hangups and preconceived ideas into the free-thinking territory which Daniel Quinn operates. Even if the answers which Quinn presents may not be satisfactory to everyone, he is certainly asking very interesting questions.

Ishmael helped me piece together personal observations which had previously been held separate in my mind. It also presented new, unique ways of looking at humanity and the environment. One small response to the book can be found in my Purpose comic. Finally, Quinn’s storytelling technique gave me ideas into new ways which complex ideas can be explained to others.

Of everything I read last year, this was my favourite. If you like my comics, I am sure you will enjoy this book. Buy Ishmael new / used (aff).

[...] came to the party in 2011, and ended up rating Ishmael as my favourite read of the year. Quinn’s unique novel cuts to the heart of Western civilisation’s struggle against [...]

If you like Ishmael (and I agree it's great) you should really read Derrick Jensen. All his books are great, but it might be good to start with either A Language Older Than Words or Endgame.