In late 2013 I was commissioned to create a poster about inhalants use for Dovetail, a government-funded organisation which works to reduce youth alcohol and drug abuse in Queensland. I had caught their attention due to my recent comics War on Drugs, and Rat Park, which both deal with the social impacts surrounding drugs.

The brief: a ‘fact sheet’ about refusing the sale of inhalants

Dovetail was putting together an information pack to send to Queensland stores which sell inhalants. Many Australians suffer from inhalant use, or ‘sniffing’. This includes certain people from some Aboriginal communities, and certain people from disadvantaged social backgrounds. People inhale substances such as petrol, glue, paint and aerosol deodorant to become intoxicated. This creates health problems for the person inhaling the agent, and it also creates social problems within the person’s family and community.

The broader campaign engages with business owners in Aboriginal communities. Encouraging their businesses act responsibly in their community. The campaign was titled “A retailer’s response to inhalants”. The tag line was “Practical advice that is good for your business, good for your community.” 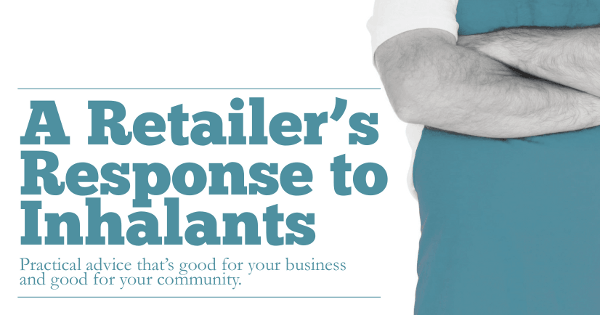 The specific problem: staff selling inhalants to friends and relatives

Dovetail had spoken to a grocery store manager who indicated that her staff sometimes felt under pressure to sell inhalants to family members with substance-abuse problems. The staff members were reluctant to refuse sale to someone who they are so closely related to.

Dovetail specifically asked me to create a poster targeted to the staff who work in their stores. This tool would be written from the perspective of a staff member who is torn between ‘doing the right thing’ and keeping her relative happy. 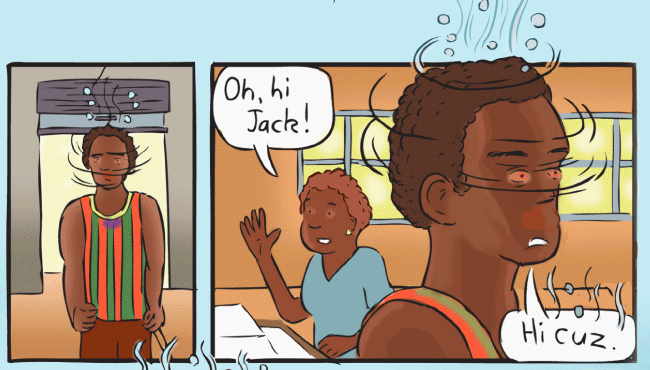 Telling the story: a character-based scenario

Dovetail gave me a general brief of how this A4-sized poster would fit into their broader campaign. i.e. the fact that it would be specifically targeted towards retail employees. It was up to me to determine how to fill the A4 page and tell the story.

Rather than a ‘fact sheet’ approach, I chose to draw a character-based comic strip. The message would be conveyed through the interactions of three characters:

Things to get right

I made deliberate choices with aspects of the artwork and story of this comic: 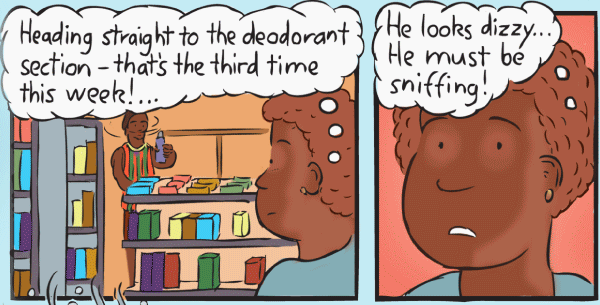 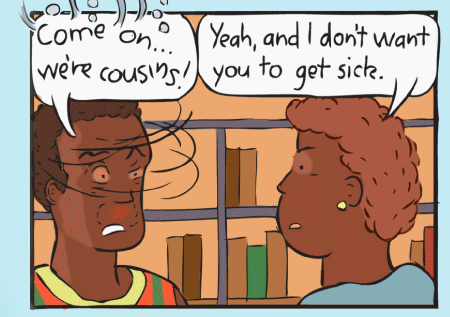 I wrote the text and drew the line art for this comic. Colouring was done by Danny Stanley a.k.a. Avon Garde. Danny and I have been in touch since 2013: around the period I released Rat Park (about the science of drug addiction) and he released One Rabbit, Two Worlds (a picture book for children whose parents are going through divorce).

We contracted Stuart McMillen to work on a comic as a part of a kit developed for retailers around inhalant use. From the outset Stuart was professional and quick in responding to the project’s needs. He very easily transformed an abstract idea into a visual narrative, communicating precisely what was required for this project. I would have no hesitation in recommending Stuart for future projects that require elements of visual communication and/or visual narrative.
Benjamin Dougherty, Dovetail Queensland