In 2013, the Office of the Commissioner for Sustainability and Environment celebrated its 20th anniversary. To mark this milestone, the agency began producing a publication to highlight its environmental achievements within the Australian Capital Territory.

I had recently moved from my old home of Brisbane down to Canberra. Hearing that there was an ‘environmental cartoonist’ in town, OCSE approached me to commission some cartoons for this publication.

OCSE gave me a fair amount of latitude to pitch ideas based on my interpretations of their work. They were interested in the ideas that I could generate independently as an artist.

The ten ‘small cartoons’ featured comical interpretations of concepts referred-to in the text. For example:

This sequence shows the dedicated work routine of a previous OCSE commissioner. He would arrive at the office in the middle of the night at 2:00am, then work through the dawn and morning until noon. At this point he would sleep under his desk during the middle of the day, before resuming work later in the afternoon. At 7:00pm he would go home to see his wife for dinner. Then the cycle would repeat! 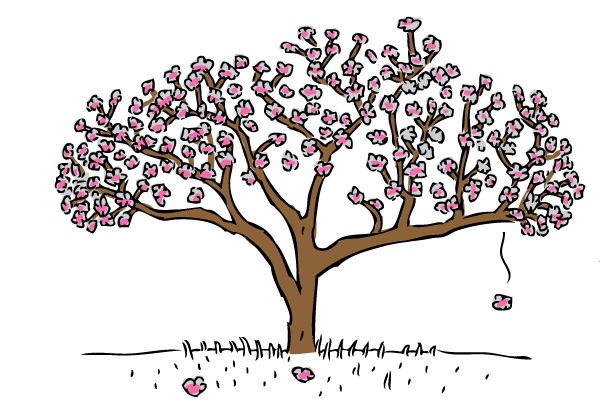 Also, there was a cartoon of a magnolia tree that was saved in Woden, following a resident’s complaint about a looming property development… 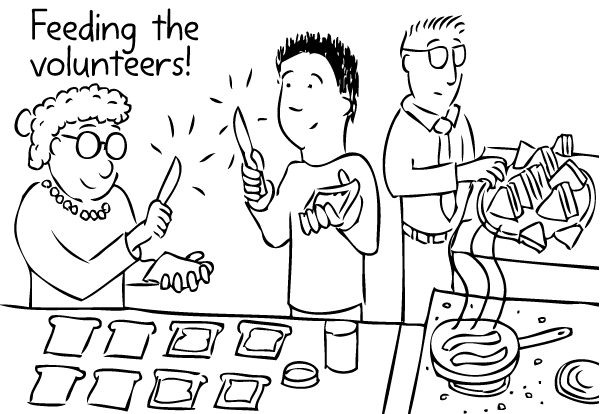 …the teams of volunteers who ‘kept the Office running’ in the early years, by cooking bacon sandwiches to feed the volunteer report-writers. In the early years, budgets were tight, and many people worked hard on the report, motivated by the promise of making a difference. Those without the appropriate knowledge, ‘did their bit’ for the environment by feeding those with the brains. 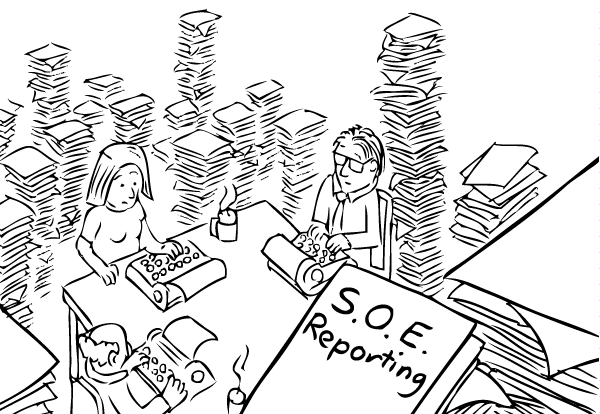 In the other room, the report-writers, slaving away on typewriters. My cartoon shows them surrounded by growing piles of paper.

I also drew 3 large images, which were designed to be full-page, stand-alone illustrations. Whereas the smaller cartoons were reductive or lightly humorous, the larger cartoons had a different tone – similar to the comics which I am best known for. 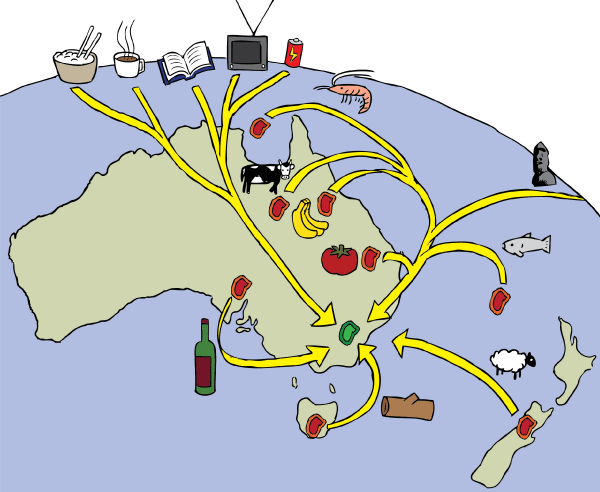 Firstly, there was a illustration of the stark fact that the ACT’s ecological footprint is 14 times larger than the Australian Capital Territory itself. Many tonnes of resources have to be brought in from outside of our region. Where are these other regions? And what are the ecological footprints of those regions? How can such a cascading global equation continue into the future?

The second drawing depicted the negative effect which developments can have on wild ecosystems. Canberra is a growing city, and its fringes increasingly push into the habitats of native animals. 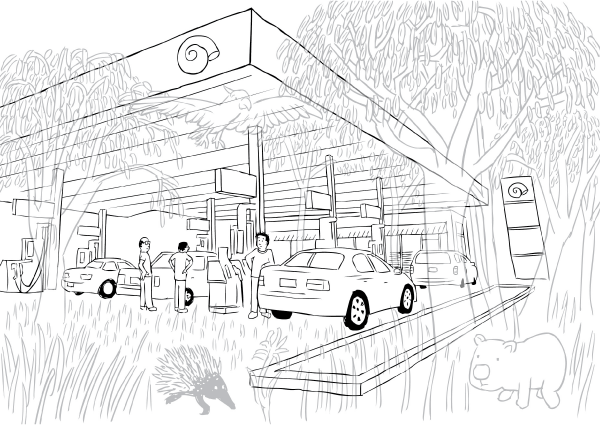 My cartoon shows a glimpse of everyday life: a service station, and motorists casually filling their cars with petrol. But it also shows the ghostly images of the ecosystem which stood before the land was cleared. There are shades of Purpose in this wordless scene. 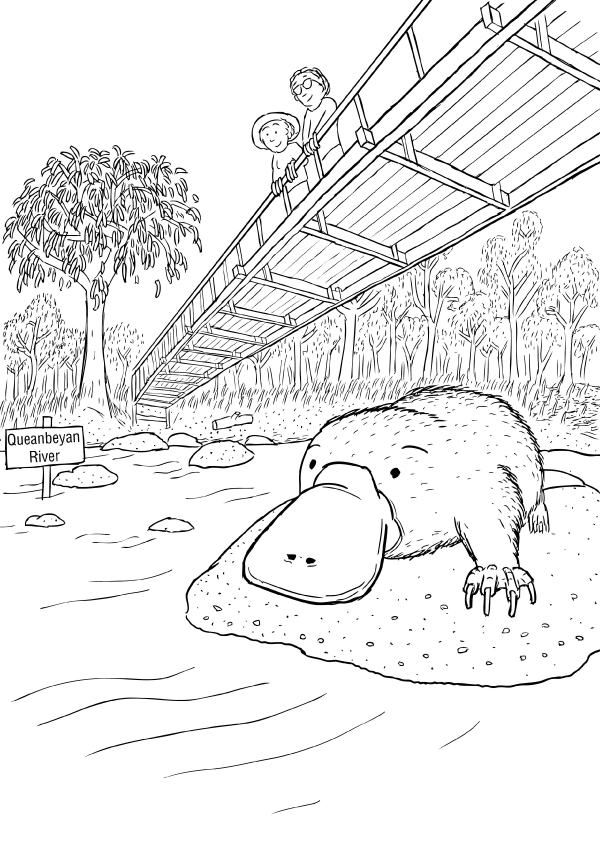 Finally, the third illustration cartoon shows a happier scene. A way in which people and wildlife can share the same space. And, importantly, the way that nature can bring joy to our everyday lives. The scene shows a low-angle view of two people looking down to a platypus from a footbridge. The scene is based on the Queanbeyan Suspension Bridge, where wild platypus can be spotted.

The ACT Environment Commisioner said this about my contributions to their publication:

The work has helped us greatly, bringing a touch of humour to some of the stories.
— Bob Neil

The final publication is titled Leading the Way: 20 Years of the ACT Environment Commisioner. Read the 20 Years webpage, or download a PDF copy [4.3 MB]. It features an eye-popping cover photograph by John Reid, featuring OCSE staff walking the solar system: 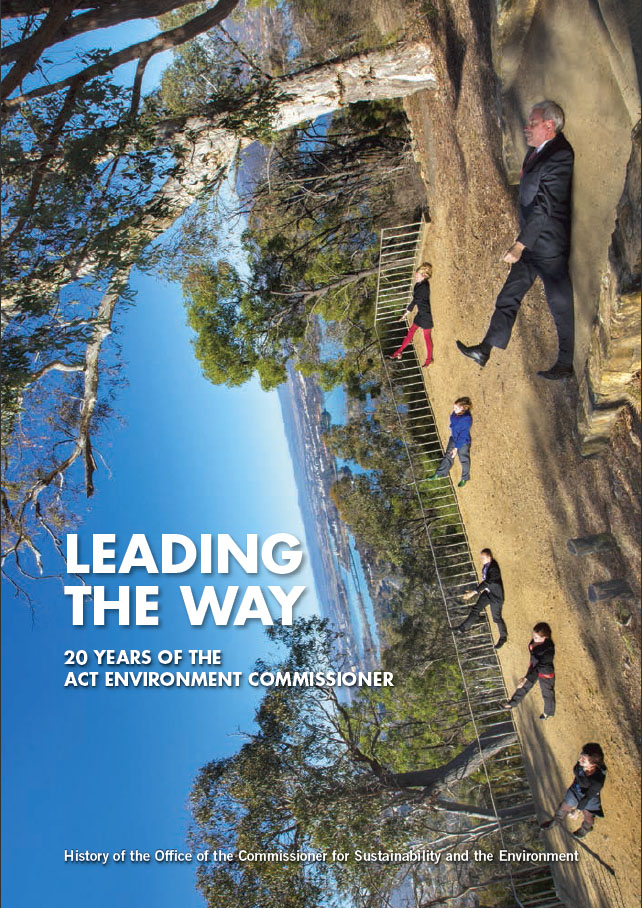