My brief: the ‘long spoons’ parable

Dan emailed me to see if I could illustrate an allegory for him to use with Chicago Recovery Alliance. Here is the way Dan described what he imagined.

An angel shows the viewer the difference between heaven and hell. Both images show a group of people gathered around a round table with a pot of nourishing food in the center each person holding long spoons sufficient to reach the pot and fill their spoons.

Heaven, the angel shows the person, looks exactly like the first room except the people are having a great time enjoying the food and interacting over a meal…the difference is that in heaven the people have learned to feed each other.

Dan Bigg said that he has found this allegory to be the single best way to explain the concept of ‘harm reduction’ to audiences during his 30 years of work in the drug-recovery field. The analogy shows how people caught in a predicament can help each other, and help themselves.

Attitude and behaviour: making the most of a situation

Although my stock-in-trade is exposing the ways which our society and environment is failing or crumbling, I always seek the positives of the situations. Can we learn anything from the problems we created? Starting from the bottom, how can we climb out of the hole?

In the ‘long spoons’ parable, the people can either choose to struggle with their problem alone, resisting the idea of trying new techniques. Or they can work with others to nourish each other and transform their social environment.

For a well-known allegory, with its own Wikipedia article, artwork depicting the parable was hard to find. Only one website seemed to have artwork of the two scenes featuring the long spoons.

People with ‘spoons for arms’? Or people holding long spoons? 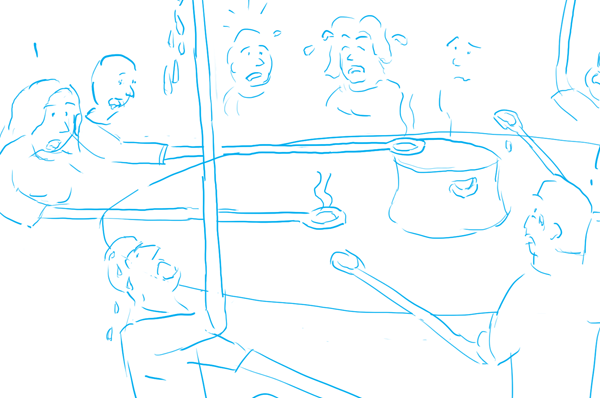 Ultimately we rejected this alien-like ‘spoons for arms’ idea and decided to use the conventional ‘long spoons’ interpretation. In this scenario the characters choose to only grip the very ends of the handle because of their mindset which prevents any lateral-thinking. This mentality is analogous to those who believe that harm-reduction strategies such as supervised injecting sites, and needle exchange should never be used to help drug users. These people believe that the only way to address the ‘drug problem’ is to fight it with escalating drug prohibition laws, and police enforcement. You know what I think of this flawed approach. 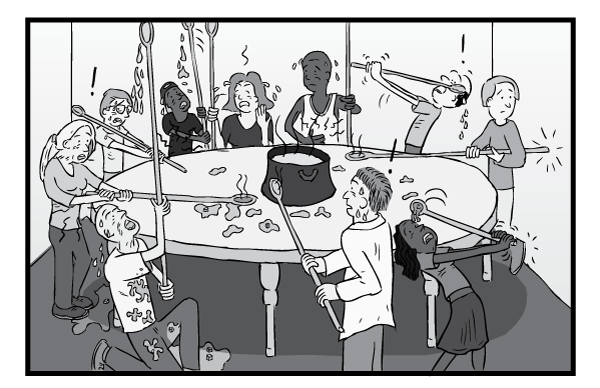 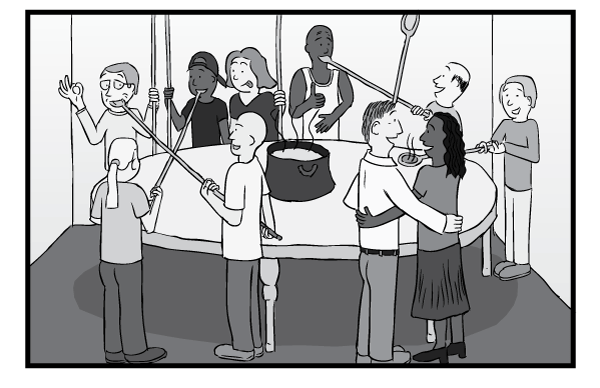