I am currently reading Paul Gilbert’s 2005 Clash biography “Passion is a Fashion” for the third time in three years. It is the most definitive account of the band’s history that I can imagine reading and, indeed, one of the best books about music that I have read. 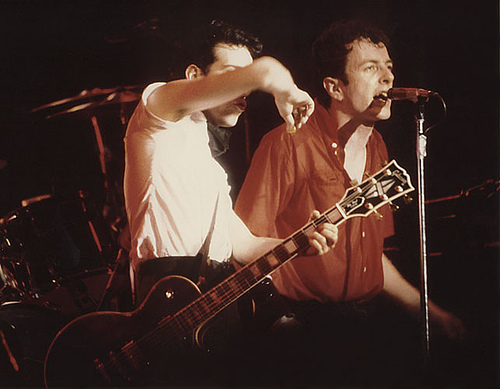 Gilbert has an excellent subject to work with, of course. The Clash embodied such a rich mixture of music, politics, image, style and substance, evolving continuously throughout their career. I am particularly intrigued with the working relationship of the main songwriters Mick Jones and Joe Strummer (above). It is amazing to read about their partnership, each man possessing an element the other lacked, and to appreciate the way they combined to a legacy greater than the sum of their parts.

I wanted to share an anecdote from 1978 that stood out to me:

Later the same day, in Aberdeen, [Clash associate] Johnny Green was nearly killed. The beige Ford Granada estate the group was travelling in had stopped at the entrance to the Aberdeen Music Hall’s car park. Green, who was behind the wheel, had opened the driver’s door and was standing up, leaning out to see what the hold-up was ahead. Then the car slipped out of gear. ‘The car is veering into a concrete wall, and the door is gradually closing, crushing me alive’, recalls Green. ‘Joe is in the passenger seat and starts crying. He’s going, “Oh God! Johnny’s dying. He’s going to be killed!”. Meanwhile, Paul and Topper leap out of the back seat and are in front of the car, trying with all their strength, without any effect, to stop it rolling forward. I think I’m a goner at this point, this is serious stuff. Then Mick leans over and calmly pulls the handbrake on. Thank God for Mick Jones! I thought that little crisis neatly summed them all up.’