I would like to draw your attention to this bizarre marketing campaign from QR Citytrain. 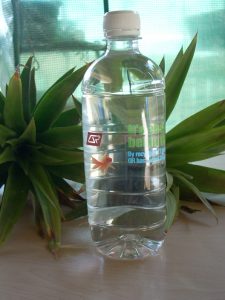 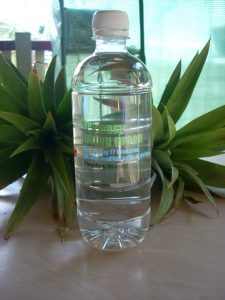 In a sort of ‘feel good’ campaign, bottles of water were freely distributed to commuters at Queensland Rail stations around Brisbane. The labels read “It’s easy being green. By recycling 17 timetables QR has saved this bottle of water. Recycling, it’s easy!”

So let me get this straight….

The concept behind this campaign is utterly puzzling. Though not at the ‘deceptive’/’unethical’ end of the greenwash spectrum, the logic of QR’s campaign is deeply flawed. 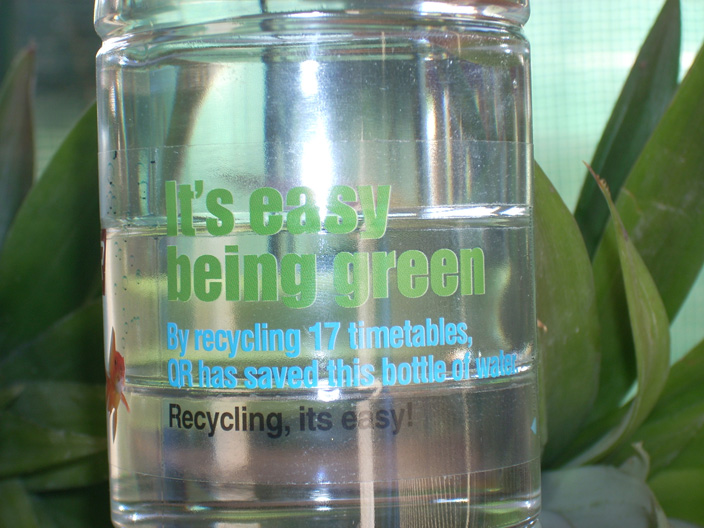 The campaign concept implies that QR’s resource efficiency efforts are so successful that it is able to provide commuters with ‘guilt free’ bottles of water. It has carefully measured the typical energy costs of ‘business as usual’, as well as the lower energy alternatives that it could also adopt. The problem is that QR implies that the ‘business as usual’ consumption pattern is the position to return to, rather than to point to descend from.

In other words, instead of creating genuine savings with their actions, QR are comfortable adding and subtracting embodied energy brownie points and arriving back at the very place that they started!

(I won’t even begin to elaborate upon the fact that the embodied energy of QR’s paper consumption pales in comparison to all other parts of its operations…including the trains themselves!)

To be fair, this bottled water campaign was conducted in late 2008, so these comments are not exactly timely. (I have been meaning to photograph this bottle for some time…) However, the flawed logic of the campaign serves a fair reminder of what can happen when spin doctors overstep the boundaries of common sense.

Hopefully looking back to this campaign can teach us lessons for the way forward. Can we please focus on achieving genuine resource efficiency results from our sustainability initiatives.

Good point David, I was looking at this from an 'energy' perspective, but it is very likely that they were considering the water needed to manufacture each bottle.

Stuart, i think you're giving QR way too much credit. I don't think embodied energy was even on their mind. Especially if it was back in '08 (possibly early in the year when the did the calculations, and had all the stickers printed), i think they were just talking about the volume of water itself (in relation to dam levels).But everything you've said is still valid. I met someone recently who was thinking about solar panels (but just enough to offset the massive air-conditioning she wanted to install). As you say, returning to 'normal' under the illusion that normal is sustainable.